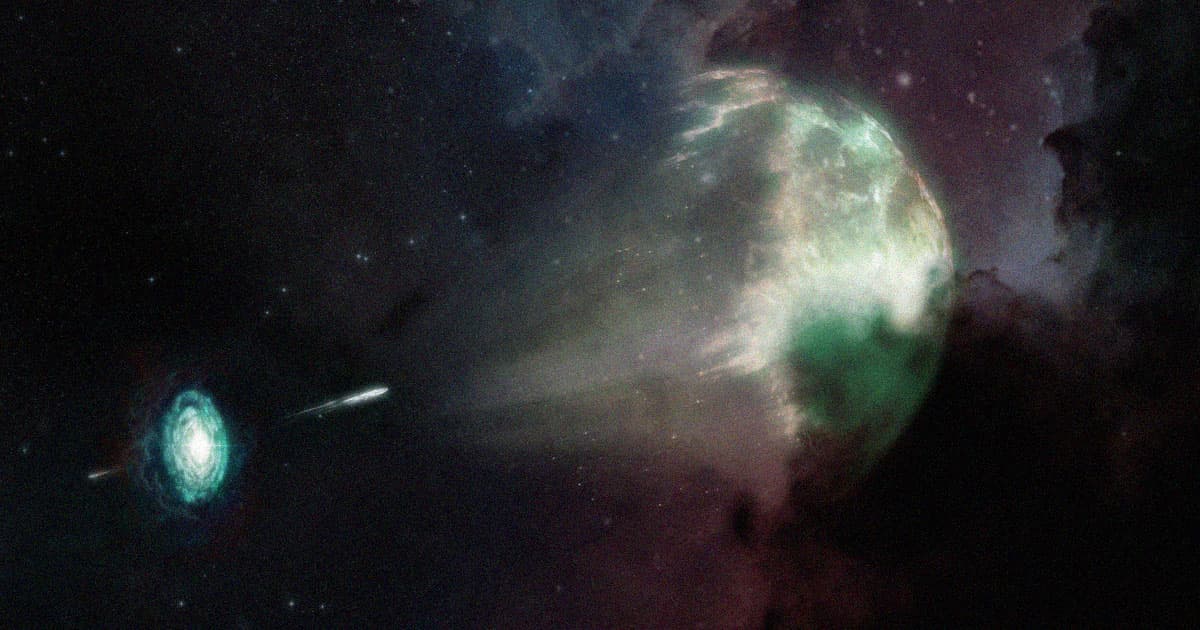 It triggered one of the most powerful explosions in the universe.

It triggered one of the most powerful explosions in the universe.

Scientists just caught the tail-end of a neutron star smashing into its stellar neighbor.

The resulting explosive jet was so powerful, it blasted a gamma ray burst (GRB) that potentially emitted more energy in a few seconds than our Sun will in its entire lifetime.

With that kind of power, GRBs are the most energetic explosions scientists know of, and are believed to be responsible for the creation of the heaviest elements in the universe like gold and platinum.

And now, for the first time, a short-duration GRB designated GRB 211106A has been captured in millimeter light using the Atacama Large Millimeter Array (ALMA).

"This short gamma-ray burst was the first time we tried to observe such an event with ALMA," said Wen-fai Fong, Northwestern University assistant professor and co-author of a new study, which is set to be published in an upcoming issue of Astrophysical Journal Letters, in a statement.

GRBs — short duration ones in particular — are exceedingly difficult to capture. According to the scientists, only six have been detected, ever — and even then, only in radio wavelengths.

"Afterglows for short bursts are very difficult to come by, so it was spectacular to catch this event shining so brightly," Fong added.

Bursting Onto the Scene

Although capturing short GRBs at millimeter wavelengths may sound like a small distinction to a layman, it’s actually a pretty big deal, the scientists say.

"What makes GRB 211106A so special is it’s not only the first short-duration GRB that we detected in this wavelength, but also, thanks to the millimeter and radio detection, we could measure the opening angle of the jet," said study co-author Ruoco Escorial in the statement.

"This is essential to infer the real rates of short GRBs in our universe and to compare them with the rates of binary neutron star or neutron star and black hole mergers."

In other words, using the millimeter data, scientists can begin to calculate just how frequently these kinds of cosmic bursts occur — a fascinating glimpse into some of the most energetic events in the known universe.

Kilonova Blast
Staggering Galactic Explosion Blamed on Black Hole Collision
12. 8. 22
Read More
Scientists Have Learned Why Neutron Stars Shine So Bright
2. 26. 18
Read More
Death From Space: Here's How Gamma Rays Could Wipe Out Life As We Know It
8. 10. 16
Read More
+Social+Newsletter
TopicsAbout UsContact Us
Copyright ©, Camden Media Inc All Rights Reserved. See our User Agreement, Privacy Policy and Data Use Policy. The material on this site may not be reproduced, distributed, transmitted, cached or otherwise used, except with prior written permission of Futurism. Articles may contain affiliate links which enable us to share in the revenue of any purchases made.
Fonts by Typekit and Monotype.