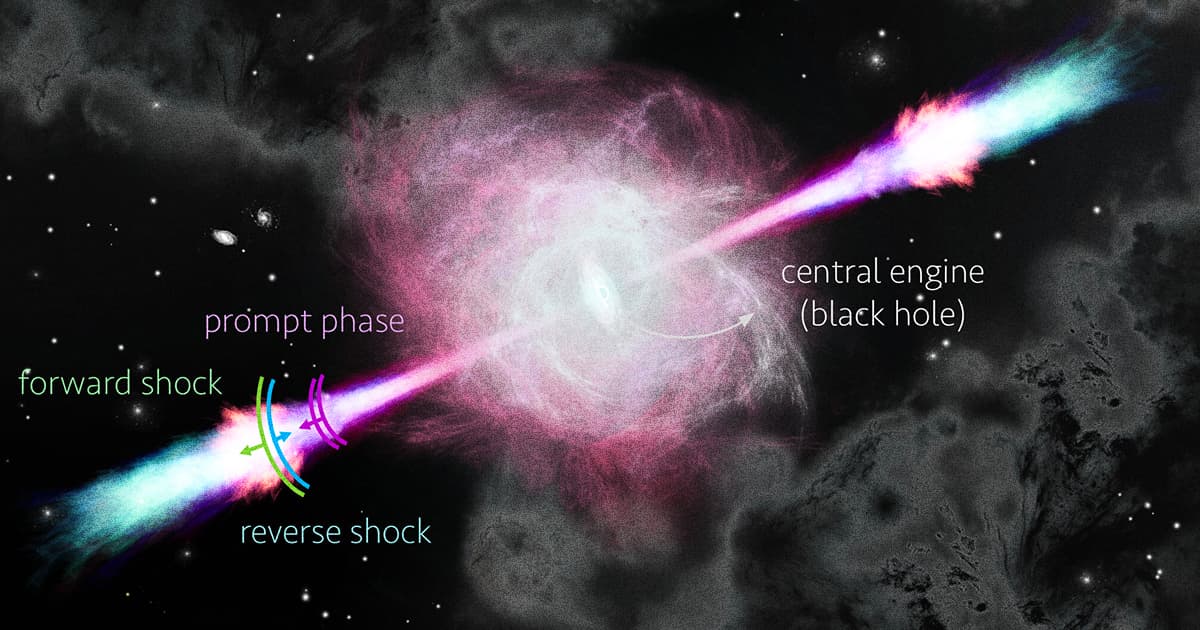 What was driving those dying stars' gamma-ray bursts?

What was driving those dying stars' gamma-ray bursts?

After decades of confusion, conflicting results, and general chaos, scientists have finally figured out what drives the powerful gamma-ray bursts (GRBs) blasted outward by dying stars.

GRBs are extremely short but extremely intense explosions given off when a massive star dies and forms a black hole in its place. But the underlying force driving these focused beams remained a mystery for a long time, with scientists disagreeing on the nature, longevity, and behavior of the magnetic fields that propelled the GRBs outward.

Now, the mystery has finally been solved thanks to a new study published in the journal Monthly Notices of the Royal Astronomical Society.

"We measured a special property of the light — polarization — to directly probe the physical properties of the magnetic field powering the explosion," study author and head of astrophysics at the University of Bath Carole Mundell said in a press release. "This is a great result and solves a long-standing puzzle of these extreme cosmic blasts — a puzzle I've been studying for a long time."

Scientists generally agreed that fleeting magnetic fields interwoven with the ejected star stuff helped drive the focused, beam-liked explosion after being spun and twisted into shape by the forming black hole. But researchers couldn't agree on how long those magnetic fields lasted or what happened to them once they traveled far enough away from the cosmic wreckage.

Because each research team used different models, methodologies, and equipment, it was near impossible to resolve all of their different findings and arrive at a real explanation, lead study author and Bath graduate student Nuria Jordana-Mitjans explained in the release.

But now, using advanced new autonomous telescopes, the Bath team was able to get the fastest glimpse of a GRB yet to determine a few things: namely that the magnetic field scatters and dissipates pretty quickly, and that they were far smaller than other teams estimated.

"This new study builds on our research that has shown the most powerful GRBs can be powered by large-scale ordered magnetic fields," Jordana-Mitjans said, "but only the fastest telescopes will catch a glimpse of their characteristic polarization signal before they are lost to the blast."