Astronomers Use New Instruments to Probe Rings Around Uranus

"Something has been sweeping the smaller stuff out, or it’s all glomming together. We just don’t know." 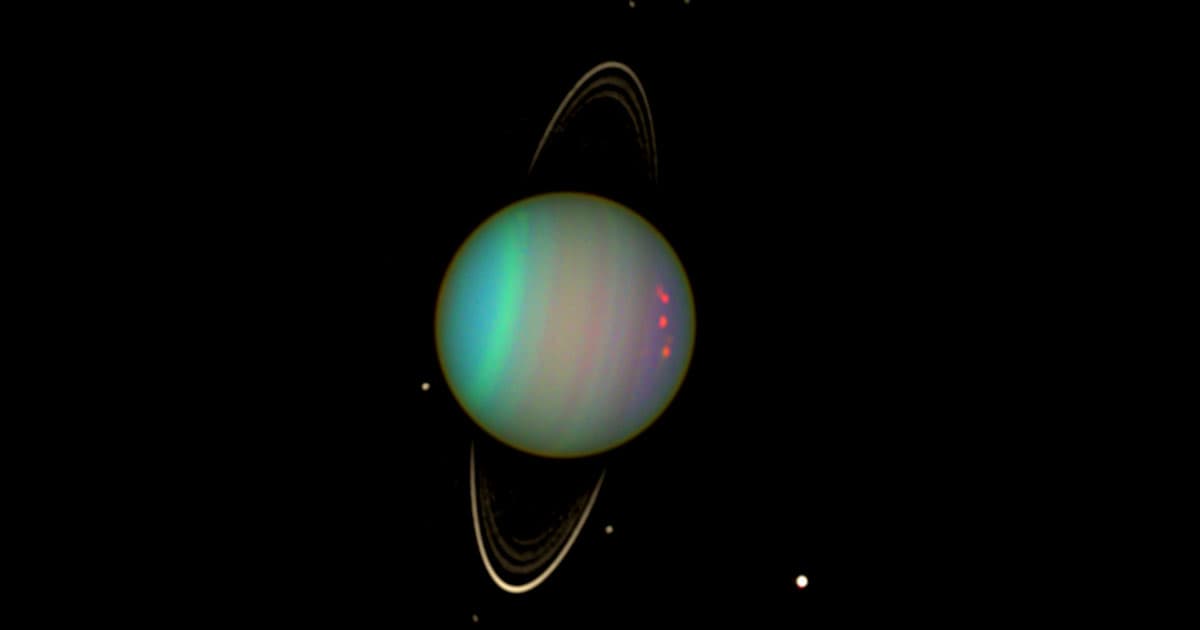 Astronomers at UC Berkeley just took the temperature of the mysterious rings surrounding Uranus for the first time, using data from the Atacama Large Millimeter Array (ALMA) and the Very Large Telescope (VLT).

They found that the largest, most visible ring — called the "epsilon ring" — exhibits some unusual traits when compared to the other rings surrounding the distant ice giant.

"Saturn’s mainly icy rings are broad, bright and have a range of particle sizes, from micron-sized dust in the innermost D ring, to tens of meters in size in the main rings," said Imke de Pater, a UC Berkeley professor of astronomy and lead author of the study published this week in The Astronomical Journal, in a statement. "The small end is missing in the main rings of Uranus; the brightest ring, epsilon, is composed of golf ball-sized and larger rocks."

Astronomers first discovered that Uranus has rings — just like its Solar System buddies Jupiter, Neptune and Saturn — back in 1977. But many questions regarding their composition and origin remained unanswered.

Now, thanks to the new thermal imaging data, the astronomers determined that the rings exist at an icy 77 degrees Kelvin, about -321 Fahrenheit, or roughly the boiling point of liquid nitrogen at standard pressure.

What had the researchers scratching their heads, though, is the composition of Uranus's rings. Other planets in our Solar System have rings made up of either larger particles or powdery dust, or a mix of both. For instance, Jupiter and Neptune's rings are largely composed of fine particles.

But Uranus's rings had dust between the rings, while the rings themselves appeared to lack any dust at all.

“We already know that the epsilon ring is a bit weird, because we don’t see the smaller stuff," said UC Berkeley graduate student Edward Molter. "Something has been sweeping the smaller stuff out, or it’s all glomming together. We just don’t know."

The rings are also "extremely narrow compared to the rings of Saturn," explained Molter. "The widest, the epsilon ring, varies from 20 to 100 kilometers wide, whereas Saturn’s are 100’s or tens of thousands of kilometers wide."

So what caused the rings to form? Was it a mystery planet that bashed into Uranus, causing its north-south axis to tilt from the Sun's plane and release a bunch of particles? Probably not — the researchers have already ruled out the rings being leftover debris from when the planet was first formed billions of years ago, Science Alert reports.

Still, the discovery could give us insight into the nature and origin of Uranus's rings.

"This is a step toward understanding their composition and whether all of the rings came from the same source material, or are different for each ring," Molter added.

READ MORE: Stunning Images Show The Rings of Uranus Are Like Nothing Else in The Solar System [Science Alert]

More on Uranus: NASA Data Shows Something Leaking Out of Uranus

Read This Next
Myanus, Hisanus, Heranus...
Here's What Uranus Scientists Think About Your Disgusting Jokes
Yeet!
New Evidence: There Was Another Planet in the Solar System That Escaped
Splish Splash
Scientists: Probe Center of Uranus, You’ll Hit Some Weird Water
Missing Link
Astronomers Find Evidence of A "Monster Galaxy" Like No Other
More on Hard Science
Reel Big Dish
Yesterday on the byte
Brilliant Scientists Decide to Name the World's Largest Telescope "SKA"
Horrible Geese
Dec 4 on futurism
Furious Geese Are Defeating Humans, Scientists Find
Quacks Like a Duck
Dec 1 on futurism
Those Headlines About Scientists Building a Wormhole Are Total Nonsense, People
READ MORE STORIES ABOUT / Hard Science
Keep up.
Subscribe to our daily newsletter to keep in touch with the subjects shaping our future.
+Social+Newsletter
TopicsAbout UsContact Us
Copyright ©, Camden Media Inc All Rights Reserved. See our User Agreement, Privacy Policy and Data Use Policy. The material on this site may not be reproduced, distributed, transmitted, cached or otherwise used, except with prior written permission of Futurism. Articles may contain affiliate links which enable us to share in the revenue of any purchases made.
Fonts by Typekit and Monotype.