Astronomers Find Evidence of A "Monster Galaxy" Like No Other

They're comparing the discovery to spotting a Yeti's footprints. 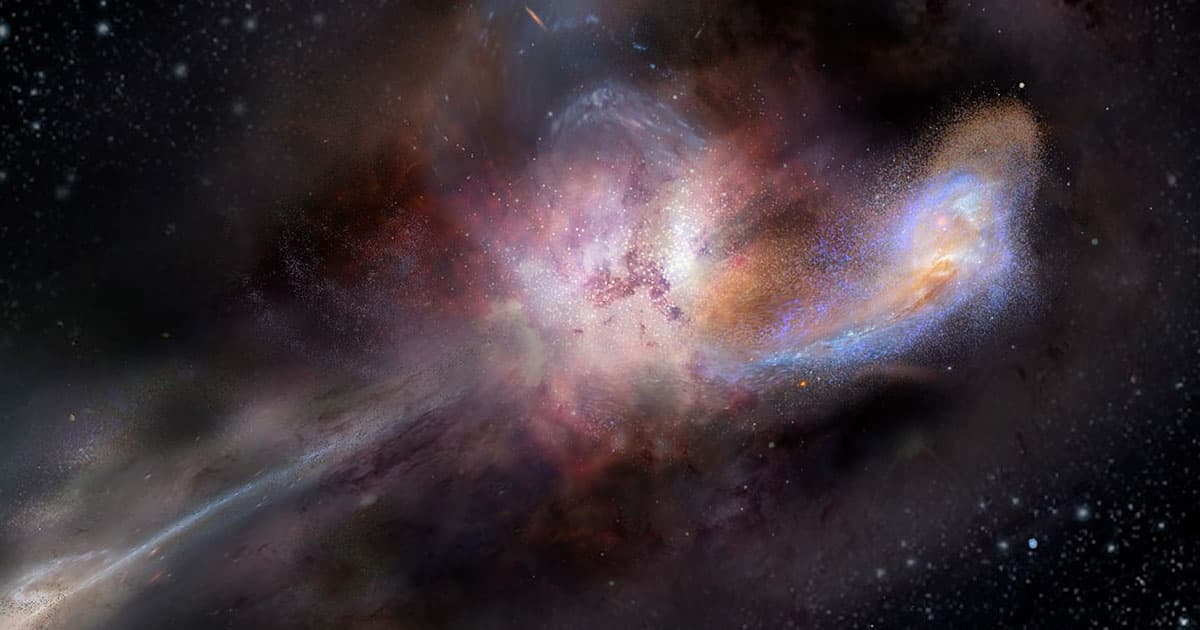 Astronomers have long suspected that the early universe was home to some massive galaxies, but mysteries lingered about these ancient cosmic giants.

For one, based on theoretical predictions, these giant old-school galaxies shouldn't have been as big as they were given how young the universe was at the time. Then there was the fact that astronomers could never seem to spot a monster galaxy during its formation, only after it'd matured.

Now, an international team of astronomers has found evidence of one of these "missing link" galaxies — a discovery so significant that they're comparing it to spotting a Yeti's footprints in the wild.

A paper published Tuesday in The Astrophysical Journal details how the researchers first spotted evidence of the galaxy in data from Chile's Atacama Large Millimeter Array (ALMA). They determined that the faint blob of light in the ALMA observations took approximately 12.5 billion years to reach Earth, meaning the observations date to the universe's infancy.

"We figured out that the galaxy is actually a massive monster galaxy with as many stars as our Milky Way," researcher Ivo Labbé said in a press release, "but brimming with activity, forming new stars at 100 times the rate of our own galaxy."

That combination of being really old, really big, and really active was exactly the type of mythical galaxy astronomers had longed to find. And now that they have, they're looking forward to using NASA's soon-to-be-launched James Webb Space Telescope (JWST) to investigate the monster galaxy — and potentially others like it — in more detail.

"JWST will be able to look through the dust veil so we can learn how big these galaxies really are and how fast they are growing, to better understand why models fail in explaining them," researcher Christina Williams said in the press release.

READ MORE: Cosmic Yeti from the Dawn of the Universe Found Lurking in Dust [University of Arizona]

Read This Next
Really Really Really Old
Astronomers Puzzled By Ancient Milky Way-Like Galaxy 12 Billion Light-Years Away
Crowded Galaxy
New Research: There Could Be 36 Alien Civilizations in Our Galaxy
Icy Rings
Astronomers Use New Instruments to Probe Rings Around Uranus
Wanna Feel Small in the Universe?
Astronomers: Something Is Warping Our Entire Galaxy
Come Together
Watch a Galaxy Form Over More Than 13 Billion Years
More on Hard Science
Tractor Beam
Jan 26 on the byte
Scientists Build Working Tractor Beam, Although It's Comically Tiny
Having a Blast
Jan 18 on the byte
New Study Shows Where You Should Hide to Survive a Nuclear Attack
Offworld Amino
Jan 15 on the byte
Scientists Find Building Blocks of Life in Meteor That Smashed Into Family's Driveway
READ MORE STORIES ABOUT / Hard Science
Keep up.
Subscribe to our daily newsletter to keep in touch with the subjects shaping our future.
+Social+Newsletter
TopicsAbout UsContact Us
Copyright ©, Camden Media Inc All Rights Reserved. See our User Agreement, Privacy Policy and Data Use Policy. The material on this site may not be reproduced, distributed, transmitted, cached or otherwise used, except with prior written permission of Futurism. Articles may contain affiliate links which enable us to share in the revenue of any purchases made.
Fonts by Typekit and Monotype.