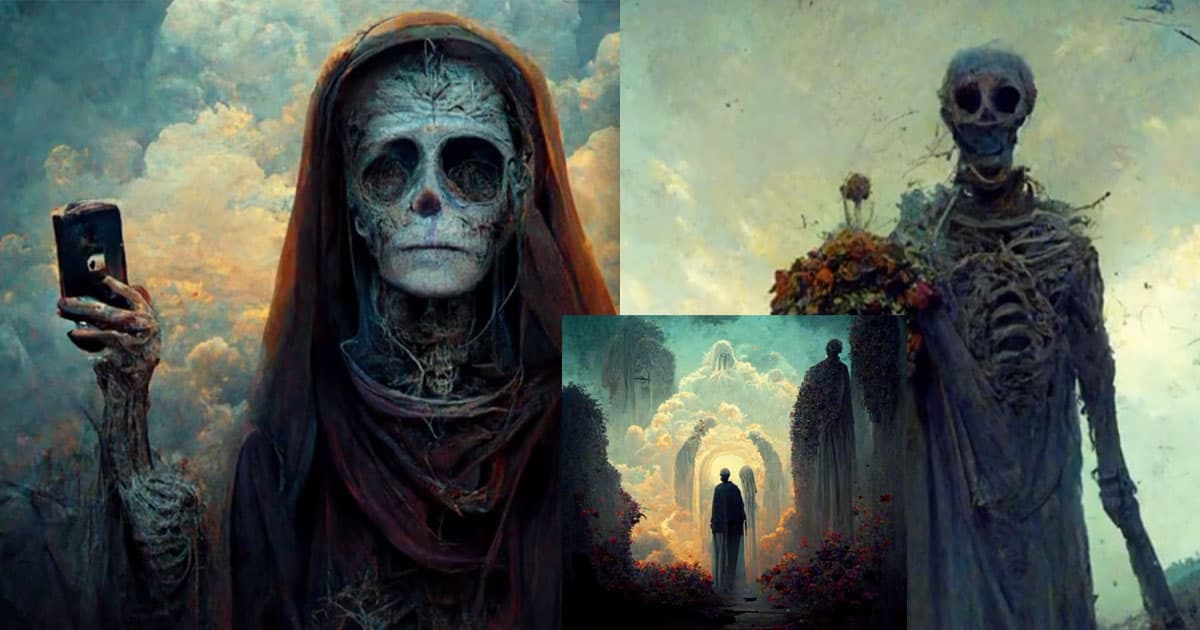 If you've ever wondered how a selfie at the end of the world, or possibly some sort of hellish purgatory, might come out... well, frankly, neither have we. But somebody wanted to know, and at the behest of an AI image generator, a picture of such a thing hath been revealed.

Behold: a series of ghoul-filled "selfies" that feature skeletal, grim reaper-like figures, one of which even captures itself mugging in the mirror via smartphone.

The TikTok video of the requested imagery was posted to an account called — what else — @robotoverloards, which has a bio touting "daily disturbing AI generated images" as its mission. Happy summer!

♬ It's Just a Burning Memory - The Caretaker

The video's creator didn't say which text-to-image AI system was responsible for the image generation. One commenter insisted that they were made with Midjourney, a self-described "small self-funded team focused on design, human infrastructure, and AI," however @robotoverlords included references to both Midjourney and DALLE-E 2, the Elon Musk-founded OpenAI's newly revamped platform, in the hashtags.

Oddly, though the undead figures are indeed quite ghoulish, each one is set against heavenly backgrounds. One holds a handful of flowers, while all of the figures are seen in front of fluffy, sunshine-filled clouds.

"Interesting that it gave a bouquet to the first person," wrote an inquisitive TikTokker.

Maybe angels have a different look than we all thought? Perhaps hell is a cloud-filled, sun-soaked nightmare? Or, more likely, the the AI image-maker responsible provided us with a portrait of the afterlife that took multiple human descriptions of what life after death looks like, and gave us a AI-generated mashup of the two.

Either way, it was nice to see some positivity in the comments. As one user remarked: "I'm okay with this."

More on AI image generators: Ai Generates Painting of Actual "Burger King" And There's a Terrifying Hunger in His Eye

He's Back
Fired Engineer Says He Begged Google to Test Whether Experimental AI Was Sentient
Yesterday
Read More
It's The Little Things
Lazy Scientists Botching Research With Machine Learning They Don't Understand
Aug 13
Read More
It's Alive
Analysis: No, AI Isn't Sentient, You Absolute Morons
Aug 9
Read More
+Social+Newsletter
TopicsAbout UsContact Us
Copyright ©, Camden Media Inc All Rights Reserved. See our User Agreement, Privacy Policy and Data Use Policy. The material on this site may not be reproduced, distributed, transmitted, cached or otherwise used, except with prior written permission of Futurism. Fonts by Typekit and Monotype.