The Amazing Physics Behind Bead Chains 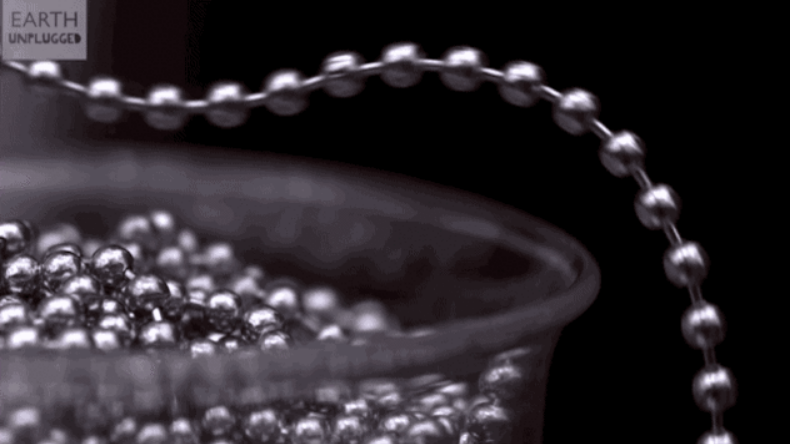 It's pretty much a first world rite of passage for young children to make concoctions with beads. However, what most children (and adults, for that matter) don't realize is just how much beautiful physics there is behind something as simple as bead chains.

In a video, Earth Unplugged shows (and explains below) what happens when 8,000 beads, stretched into a 164-foot (50-meter) chain, meet a beaker.

These beads seem to levitate, defy gravity and jump out of the beaker. But how and why do they act like this? We met up with Steve Mould, the science guy from Britain's Brightest, to explore the science behind the "self siphoning beads"—also known as "Newton's Beads".

To get a closer look at the phenomenon, we filmed them in slow motion to try to work out what exactly was happening, and how the behaviour changes with height.

Instead what it does is it changes direction slowly over the course of a loop, so that's why it almost has to be a loop, because it needs that time and it needs that space to change directions.

Read This Next
Quacks Like a Duck
Those Headlines About Scientists Building a Wormhole Are Total Nonsense, People
Good Samaritan
Physics Dept Gets Random Box Full of $180K in Untraceable $50s and $100s
Brands We Love
Go Beyond The Science Headlines With The Fundamentals Of Physics Course
Quantum Teleportation
Scientists Are Building a Quantum Teleporter Based on Black Holes
Alternate Timelines
Paradox-Free Time Travel Possible With Many Parallel Universes
More on Hard Science
Warped Tour
Yesterday on futurism
Professor Believes Door to Warp Drive May Lie With Ethylene Glycol
Sky Bursts
Yesterday on the byte
Astronomers Intrigued by 25 Mysterious Repeating Radio Signals From Deep Space
Tractor Beam
Jan 26 on the byte
Scientists Build Working Tractor Beam, Although It's Comically Tiny
READ MORE STORIES ABOUT / Hard Science
Keep up.
Subscribe to our daily newsletter to keep in touch with the subjects shaping our future.
+Social+Newsletter
TopicsAbout UsContact Us
Copyright ©, Camden Media Inc All Rights Reserved. See our User Agreement, Privacy Policy and Data Use Policy. The material on this site may not be reproduced, distributed, transmitted, cached or otherwise used, except with prior written permission of Futurism. Articles may contain affiliate links which enable us to share in the revenue of any purchases made.
Fonts by Typekit and Monotype.