"I guess 'Road Rage Mode' didn't fit on the screen." 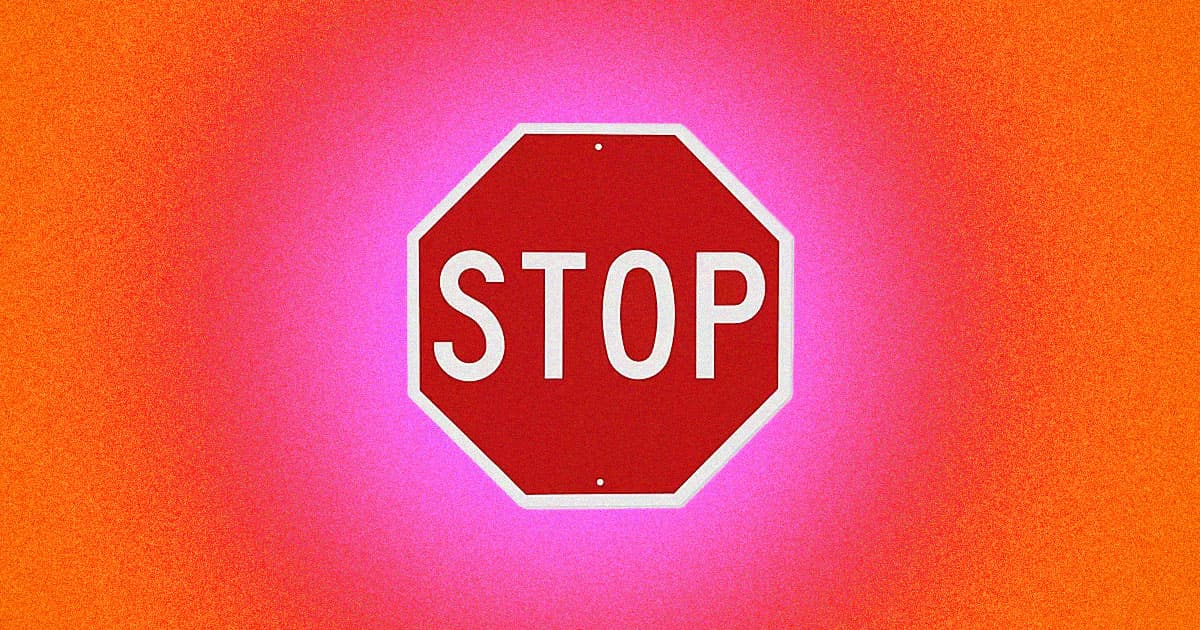 When you roll up to a stop sign in a car, what do you do? Do you come to a complete stop, or do you slow down to a crawl before picking up speed again?

Spoiler alert: the latter, known as a "rolling stop" or a "California roll," is illegal in most places.

Tesla is seemingly leaving the decision up to its drivers when it comes to its infamous self-driving software suite misleadingly called "Full Self-Driving" (FSD), The Verge reports — yet another instance of the Elon Musk-led company playing fast and loose when it comes to the rules of the road.

In the software's beta, first released back in October in a bid to let customers iron out the kinks on public roads, users can now choose between three profiles: "Chill," "Average," and "Assertive."

In both the Average and Assertive profiles, the vehicle "may perform rolling stops," according to an in-car description.

It's important to note, however, that it's unclear whether Teslas are actually trained to not come to a full stop at stop signs specifically, as The Verge points out. Rolling stops at yield signs, for instance, are generally above board.

While in the Assertive profile, the vehicle will also shorten its follow distance and "perform more frequent speed lane changes" — the kind of irritating driving that more responsible motorists look down on.

Unsurprisingly, the ambiguous setting is kicking up controversy.

Tesla has been in deep water with safety regulators for quite some time. Most recently, the National Highway Traffic Safety Administration announced that it's investigating the company for allowing drivers to play video games while driving.

In other words, the carmaker already isn't exactly a favorite among regulators. National Transportation Safety Board (NTSB) chair Jennifer Homendy, for instance, laid down a gauntlet during an October interview with CNBC.

By this point, it's clear that Tesla is attempting to push self-driving technologies and legal limits to the breaking point — and there are bound to be major stumbling blocks along the way, as Musk has admitted himself.

Does that mean we have to allow cars to behave recklessly on public roads? To many, the answer is a straightforward no.

More on Tesla: Tesla Forced to Recall Almost Half a Million Cars

Read This Next
It Was the Tesla
Manslaughter Case Has a Strange Twist: Tesla That Killed Couple Was on Autopilot
Full Self-Delusion
Survey: 42% of Tesla Autopilot Drivers Think Their Cars Can Entirely Drive Themselves
Red Light
Godfather of Self-Driving Cars Says the Tech Is Going Nowhere
Musk Antics
Elon Musk Has a Big Problem on His Hands
Please Elon
Why These Tesla Owners Are Going on a Hunger Strike Against Tesla
More on Advanced Transport
Pizza Personnel
Nov 23 on the byte
Domino's Buying Hundreds and Hundreds of Electric Delivery Vehicles
Obey the Bus
Nov 22 on the byte
Tesla Full Self-Driving Caught Ignoring Stop Signs on School Buses
Gruesome
Nov 14 on the byte
Police Investigating Deadly Accident In Which Tesla Plowed Into Multiple People
READ MORE STORIES ABOUT / Advanced Transport
Keep up.
Subscribe to our daily newsletter to keep in touch with the subjects shaping our future.
+Social+Newsletter
TopicsAbout UsContact Us
Copyright ©, Camden Media Inc All Rights Reserved. See our User Agreement, Privacy Policy and Data Use Policy. The material on this site may not be reproduced, distributed, transmitted, cached or otherwise used, except with prior written permission of Futurism. Articles may contain affiliate links which enable us to share in the revenue of any purchases made.
Fonts by Typekit and Monotype.