Want to Terraform Mars? This Game Gives You the Chance

What if we no longer thought of Mars as the Red Planet? 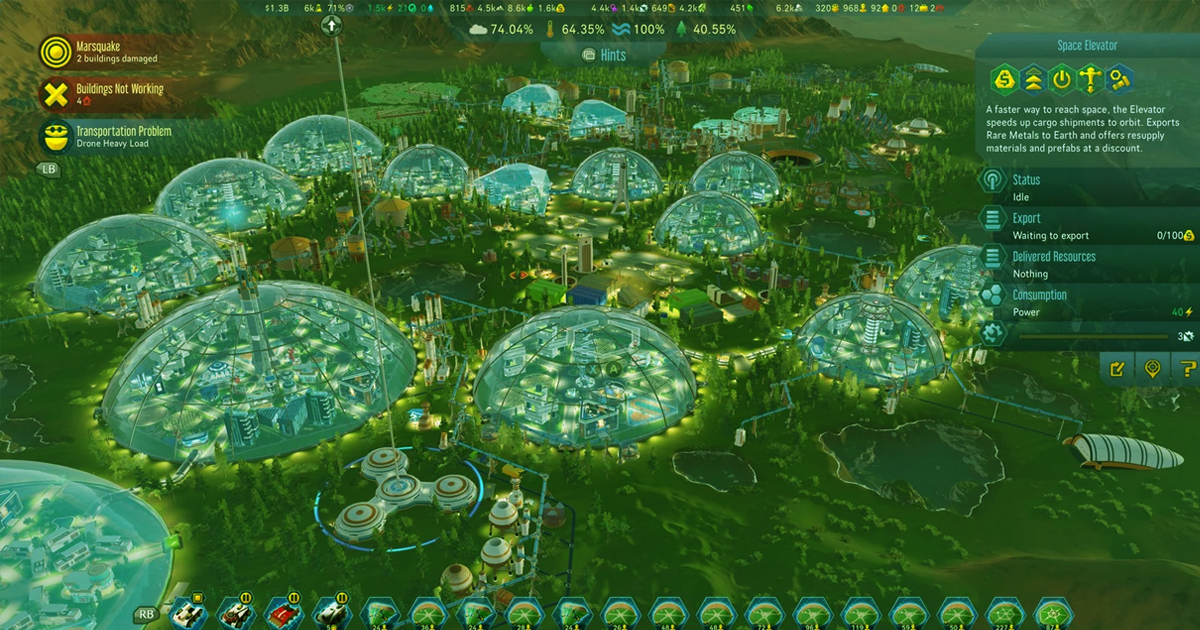 The Red Planet may not be red for much longer.

“It’s not just about getting to the planet,” said Gabriel Dobrev, CEO of Haemimont Games, in the game’s trailer. “It’s also about being able to stay there and to build a big civilization and that requires a much more hospitable place.”

The game allows you to gather resources from the Martian surface, build structures and livable domes for the human "colonists" of the planet, and send rockets back and forth to Earth as you develop a thriving Martian civilization. The DLC comes with an additional update, "Project Laika," which introduces animals like llamas and cattle to the hostile planet.

Let's just get this out of the way: Everything is harder on Mars.

Sand storms threaten to destroy any structures you build, the unrelenting radiation fries human DNA, and the lack of atmospheric pressure would essentially cause your organs to rupture. If you figure out how to survive all that, you might begin to think about colonizing and terraforming the planet.

Just like reality, every decision has a consequence: releasing too many greenhouse gasses into the atmosphere will trigger an acid rain and reduce soil quality. If an asteroid slams into the planet or a marsquake strikes, it'll endanger your colony.

And that's what we're up against in real life, too. The game mimics reality's challenges and requires patience and hard work to tame the tough planet. But you don’t need to be an expert on terraforming or Mars to enjoy the game: the game has in-depth tutorials to teach you the basics.

Terraforming requires a careful balance of the elements: Atmosphere, Temperature, Water, and Vegetation. All must be carefully monitored, with the goal of bringing them closer to habitable levels. Seed the planet's red soil with lichen, brush, and trees, and once the atmosphere reaches breathable levels, you can open up the glass domes and let the colonists take a fresh breath of Martian air.

Watching the ant-like colonists building the city alongside Martian mountainscapes is like a meditative experience, all set to the beautiful in-game views of a starry sky. Fans of classic city-building games like "SimCity" will see the planet as a giant sandbox, ready for an expert interplanetary urban planner to step in and turn the red soil into a bustling metropolis.

Although the game allows us to imagine a future where the Red Planet turns green, it may be a long time before we achieve that in reality — if ever — but that won't stop astronomers from working toward solutions.

Carl Sagan believed the key was melting water vapor from Mars’ polar ice to create "much more clement conditions." NASA continues funding research into potential Martian habitats that could keep the inhabitants safe from the elements. And a more recent plan to increase atmospheric pressure, from Elon Musk, is to release the carbon dioxide trapped in Mars’ surface by dropping nuclear bombs on its poles — which you can try out in the game.

But until we get there with science, "Green Planet" can show us what it would be like if Mars were more than an unattainable dream, and to imagine a version of the lush, green planet we find ourselves on now — of our own making.

Read This Next
Martian Duds
On Tomorrow's Launch, NASA Is Sending Spacesuit Chunks to Mars
Coarse and Rough
Astronomers Say "Megaripples" Are Moving Across the Surface of Mars
Venus Flyby
Scientists: Flying By Venus to Get to Mars Would Be Cheaper, Faster
Let's Go to Mars
This Plan For a Martian City Under a Dome is Breathtaking
Coliving Spaces
These Researchers Want You to Live In a Fungus Megastructure
More on Sci-Fi Visions
What is Happening
Feb 1 on the byte
Elon Musk Sets His Twitter Account to Private
From the Dept. of...
Jan 30 on futurism
The Best Humidifiers of 2023
Human v. Giraffe
Jan 24 on the byte
Chaotic Italian Fashion Line Baffles Facial Recognition Software
READ MORE STORIES ABOUT / Sci-Fi Visions
Keep up.
Subscribe to our daily newsletter to keep in touch with the subjects shaping our future.
+Social+Newsletter
TopicsAbout UsContact Us
Copyright ©, Camden Media Inc All Rights Reserved. See our User Agreement, Privacy Policy and Data Use Policy. The material on this site may not be reproduced, distributed, transmitted, cached or otherwise used, except with prior written permission of Futurism. Articles may contain affiliate links which enable us to share in the revenue of any purchases made.
Fonts by Typekit and Monotype.