The Space Station Is Getting a New Toilet

Eventually, the goal is to take the water out of astronaut poop and... uh... reuse it. 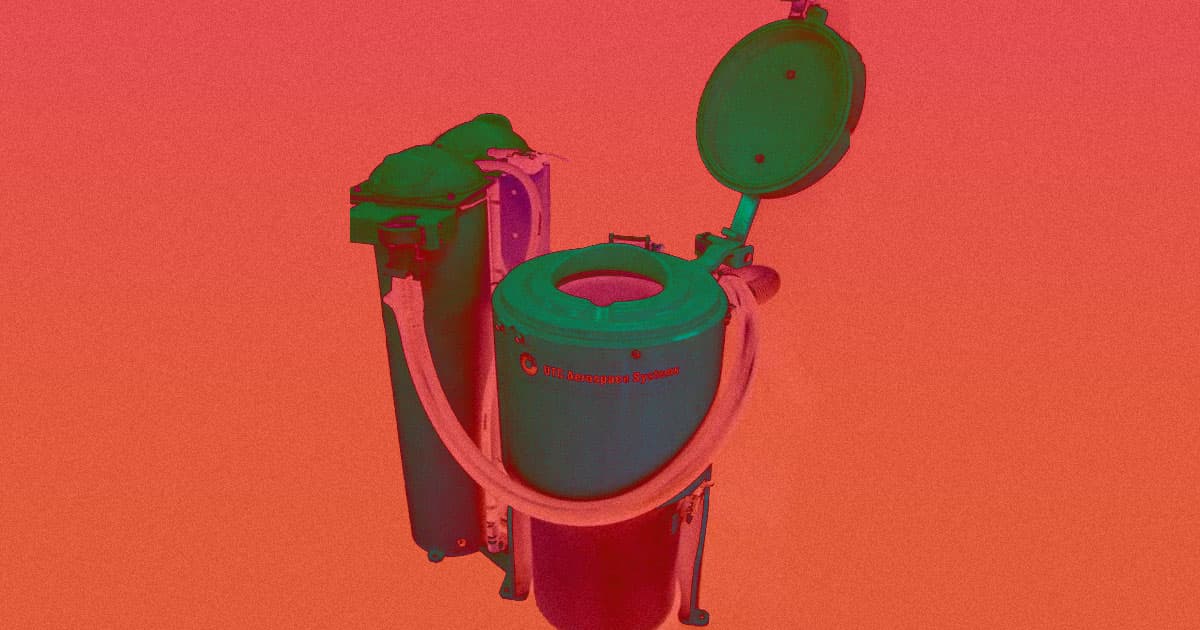 Astronauts on board the International Space Station will be about to sigh a big sigh of relief: the space station is getting a brand spanking new toilet, as Space.com reports.

The new system called the Universal Waste Management System (UWMS) is meant to be the (smelly) testing grounds for zero gravity toilets to be used during long space flight, such as a journey to Mars.

It's also meant to standardize the toilet experience in space and thereby reduce costs — as well as lead to the development of smaller fecal canisters to improve stowage efficiency, according to NASA.

A NASA spokesperson told Space.com that the new and improved lavatory could be headed to the ISS as early as this fall, but a spacecraft has yet to be picked out for the special delivery.

The goal of the new toilet is also to make sure that we don't have to leave human waste behind and thereby risking cross-contamination on distant planets. In fact, during Apollo 11, US astronauts left 96 bags of human poop on the lunar surface. Many scientists argue we should go back and dispose of it properly.

Long-distance space travel could end up accruing a lot of waste. In fact, NASA estimates that we'd need to manage about 600 pounds of solid waste on a mission to Mars.

"Our future goals are to stabilize and dry the metabolic waste to make it microbially inactive and possibly reuse that water, reduce the amount of consumables for the potty, because it does really accumulate on a long mission," Jim Broyan, program manager for Environmental Control and Life Support Technology and Crew Health and Performance at NASA, said during a May 20 meeting, as quoted by Space.com.

The toilet on board the ISS right now dates back to the 90s. In the past, astronauts have struggled with aim. It also proved to be clunky to use, especially for women.

In February 2019, Russian media reported that the toilet on board the ISS burst, spilling gallons of fluid. The lucky astronauts had to mop it up with towels.

The new toilet will have an adjusted shape and will include toe bars for astronauts to hook their feet into. The same model will eventually fly on NASA's Orion spacecraft that's headed to the Moon later this decade.

READ MORE: The International Space Station is getting a new toilet this year [Space.com]

Read This Next
Overloaded
Whiny Space Tourists Say They Were Too Busy on the Space Station
From Our Partners
Turn Your Standard Toilet Paper Into A More Soothing Experience With Pristine
Space Race Movie Edition
Russia Wants to Be the First to Shoot a Movie In Space
Fire! Fire!
NASA Is Setting a Fire Inside a Spaceship
Clots in Space
A NASA Astronaut Got a Blood Clot In Space
More on Sci-Fi Visions
LIfe Finds a Way
Yesterday on the byte
Billionaire Private Astronaut Suggests Reviving Dinosaurs
Health Revelation
Nov 22 on neoscope
Chris Hemsworth Reveals Grim Genetic Test Results, Will Take Break From Acting
Cybersecurity Dis...
Nov 13 on the byte
Insurance Company Refuses to Pay Ransom, So Hackers Start Releasing Health Records of Up To 10 Million People
READ MORE STORIES ABOUT / Sci-Fi Visions
Keep up.
Subscribe to our daily newsletter to keep in touch with the subjects shaping our future.
+Social+Newsletter
TopicsAbout UsContact Us
Copyright ©, Camden Media Inc All Rights Reserved. See our User Agreement, Privacy Policy and Data Use Policy. The material on this site may not be reproduced, distributed, transmitted, cached or otherwise used, except with prior written permission of Futurism. Articles may contain affiliate links which enable us to share in the revenue of any purchases made.
Fonts by Typekit and Monotype.