"The biggest contributor to the current space debris problem is explosions in orbit." 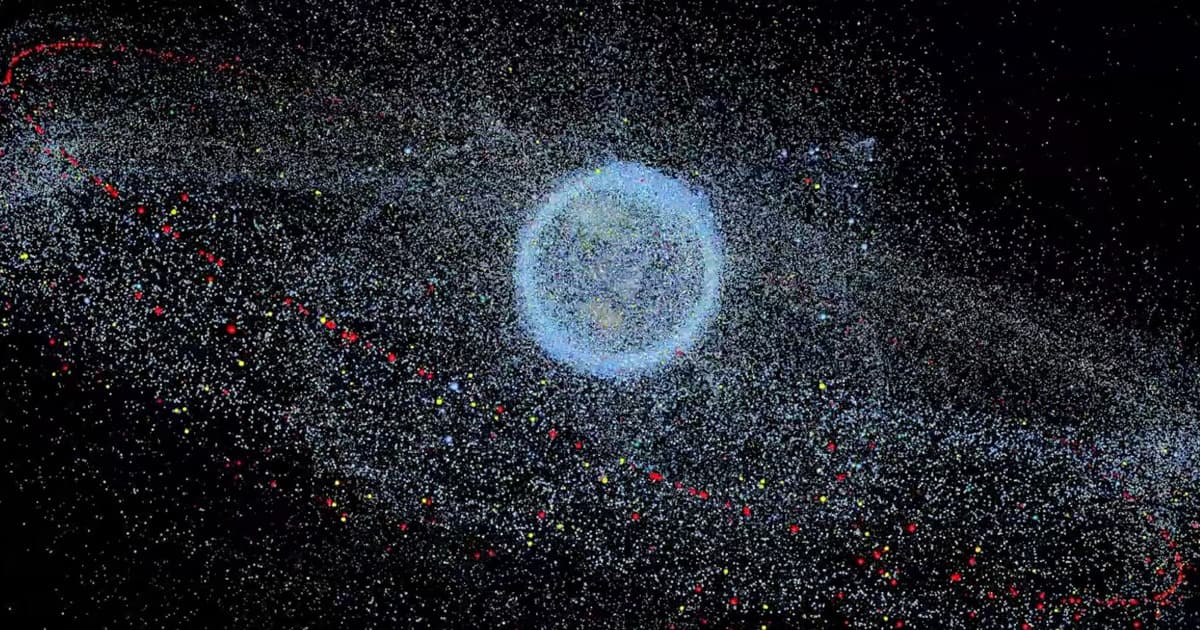 With thousands of new satellites jamming up Earth's orbit, the risk of dangerous collisions is on the rise, experts warn.

Just last month, the International Space Station had to fire up its thrusters to avoid smashing into a piece of space junk — for the third time this year.

"The biggest contributor to the current space debris problem is explosions in orbit, caused by left-over energy — fuel and batteries — onboard spacecraft and rockets," explained Holger Krag, Head of the European Space Agency's Space Safety Program in a statement.

"Despite measures being in place for years to prevent this, we see no decline in the number of such events," he added. "Trends towards end-of-mission disposal are improving, but at a slow pace."

The more debris in orbit, the higher the chance of a collision. And a collision in orbit is bad news, because it creates a cascade of new pieces of space debris.

NASA currently keeps track of tens of thousands of artificial objects in Earth's orbit, but that's only scratching the surface. NASA estimates that about half a million marble-sized pieces of debris are spinning around our planet, all posing a threat to astronauts as they travel at extreme speeds.

Many satellites sent up into space are designed to park themselves in distant trajectories around the Earth, called "graveyard orbits," once they retire. Larger pieces, including cargo vessels that resupply the International Space Station, are designed to burn up in the Earth's atmosphere after their job is done.

In addition to these measures, international guidelines also advise countries to make sure their stuff doesn't "shed" by having bits and pieces become detached post launch.

But experts are worried that the booming private space industry will pile on to the problem, with companies not always going out of their way to follow these guidelines. Even the CEOs of space startups themselves are starting to worry about our orbit becoming congested.

About 30 percent of rockets launched since 2017 were sent into the Earth's atmosphere to burn up — and that trend is on the rise. That's good news to experts, because it means used up pieces of debris leave practically no trace once their purpose is fulfilled.

While they've been wreaking havoc with astronomers' data back on Earth, 95 percent of components used to make SpaceX's rapidly growing Starlink constellation is designed to "quickly burn in Earth’s atmosphere at the end of each satellite’s life cycle... with future iterative designs moving to complete disintegration," according to a press kit published by the company last year.

Another solution is to service aging satellites, giving them a new lease on life. In February, Northrop Grumman’s “Mission Extension Vehicle-1” (MEV-1) docked with 18-year-old communication satellite, the first time a commercial spacecraft has docked to an existing one. The goal is to extend the shelf life of existing satellites rather than having to send up even more to replace them.

Yet plenty of artificial objects remain. In fact, according to research published last month, 75 percent of space junk in geosynchronous orbit (at about 22,000 miles) has never even been catalogued.

"To continue benefiting from the science, technology and data that operating in space brings, it is vital that we achieve better compliance with existing space debris mitigation guidelines in spacecraft design and operations," Florer said. "It cannot be stressed enough — this is essential for the sustainable use of space."

In other words, it's in the private space industry's interest to make sure their stuff doesn't end up colliding in Earth's orbit, the ESA argues, as that could end up hurting their bottom line.

More on space debris: Research: Most Geosynchronous Space Junk Has Never Been Catalogued

Read This Next
Mars Rock Blues
Mars Rock Samples Probably Won't Infect Earth With Deadly Martian Plague, Scientist Says
Duck and Roll
Russia Forced to Dodge Space Debris From When It Blew Up Satellite
RIP
Unfortunate Comet Flies Too Close to the Sun, Disintegrates and Becomes a Ghost
Blowing Up Satellites
Russia Says Actually It's Fine That It Blew Up a Satellite, Filled Orbit With Deadly Space Junk
Space Junk
ISS Astronauts Shelter in Escape Vehicles as Mysterious Debris Threatens Station
More on Off World
Watery Grave
Tuesday on the byte
Chinese Military Forcefully Seizes Debris That Philippines Recovered After It Fell From Space
Jetsam
Tuesday on the byte
Lunar Lander Released by NASA’s Artemis 1 Mission Dies
Not Not Accurate
Monday on the byte
Bad Guy in New "Indiana Jones" Movie Is Nazi Who Works at NASA
READ MORE STORIES ABOUT / Off World
Keep up.
Subscribe to our daily newsletter to keep in touch with the subjects shaping our future.
+Social+Newsletter
TopicsAbout UsContact Us
Copyright ©, Camden Media Inc All Rights Reserved. See our User Agreement, Privacy Policy and Data Use Policy. The material on this site may not be reproduced, distributed, transmitted, cached or otherwise used, except with prior written permission of Futurism. Articles may contain affiliate links which enable us to share in the revenue of any purchases made.
Fonts by Typekit and Monotype.