Elon Musk has teased the possibility of adding SpaceX thrusters to Tesla cars before. Now you can watch what it would be like. 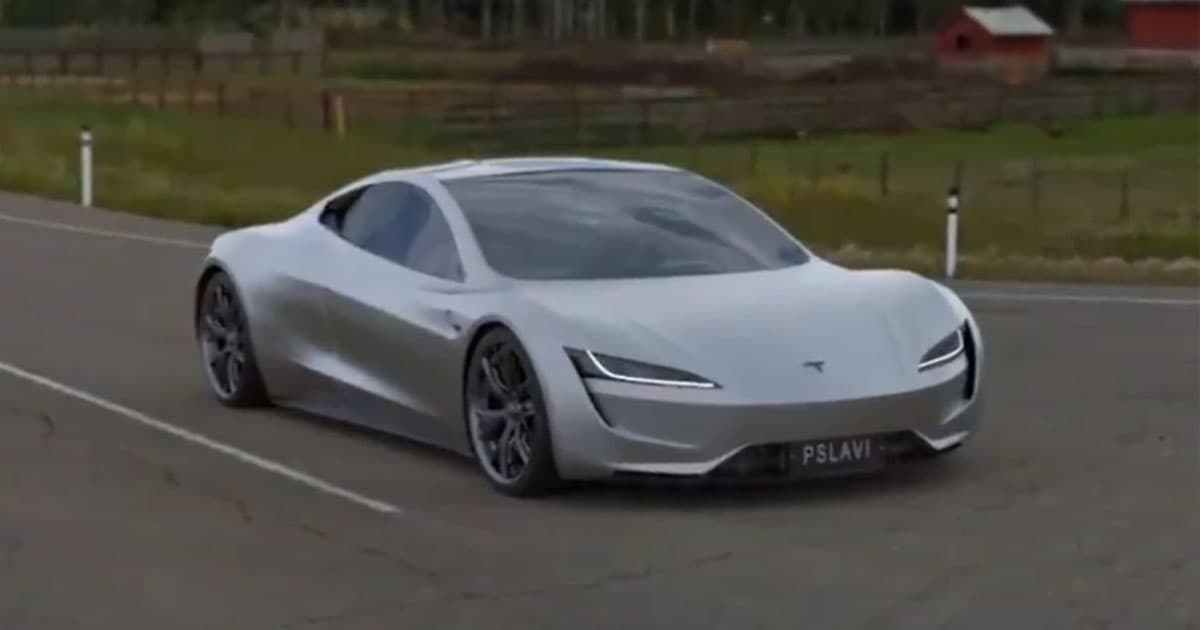 A new simulation by CGI artist Slave Popovsky shows what a Tesla Roadster accelerating from 0 to 60 mph in a blistering 1.1 seconds could look like — thanks to the addition of SpaceX thrusters, which Elon Musk has teased previously.

This is how fast 1.1 seconds 0 - 60mph take off should look like with Space X package thrusters on the Tesla Roadster. Computer worked out physics and then visualised in a render animation. Not sure how much gas but threw the effect in anyway. Enjoy @elonmusk #tesla #spacex pic.twitter.com/VzMukQPT2E

Shaving that down to 1.1 seconds, however, would make it far and away the fastest accelerating consumer car on the planet. The fastest production cars have only been inching closer to the two second mark in zero-to-60 mph acceleration over the past few years.

In a June 2019 interview with the Ride the Lightning podcast, Musk elaborated on the "SpaceX package," claiming that it could give the Roadster a staggering three Gs of thrust.

"If you have three Gs of thrust, you can go in any direction," he said on the podcast at the time, as quoted by Electrek. “You can go up and accelerate with still more than 2 Gs."

Such a SpaceX package would be so large, it would need to replace the entire rear row of seats.

In July of last year, Musk even told Electrek editor-in-chief Fred Lambert on Twitter that a Tesla Roadster "hover test" could take place by "maybe end of next year."

More on the Roadster: Meet the Guy Tesla Fired, Who Now Fixes Roadsters

Read This Next
Absent CEO
Tesla Investors Furious at Elon Musk for Vanishing During Crisis to Play With Shiny New Twitter
Stay Away
Tesla Is Having Extreme Trouble Hiring, for Some Reason
Musk Antics
Elon Musk Has a Big Problem on His Hands
Please Elon
Why These Tesla Owners Are Going on a Hunger Strike Against Tesla
Streisand Effect
Hurry Up and Watch These Videos Tesla Wants Removed From the Internet
More on Advanced Transport
High Tide
8:32 PM on the byte
We’re in Awe of Amsterdam’s Huge Underwater Bike Parking Garage
Quelle Surprise!
Yesterday on the byte
Of Course Elon Musk Is Pushing The Cybertruck Back Again, What Did You Expect?
Stay Away
Wednesday on the byte
New SUV Features Electrified Door Handles and Pepper Spray Guns
READ MORE STORIES ABOUT / Advanced Transport
Keep up.
Subscribe to our daily newsletter to keep in touch with the subjects shaping our future.
+Social+Newsletter
TopicsAbout UsContact Us
Copyright ©, Camden Media Inc All Rights Reserved. See our User Agreement, Privacy Policy and Data Use Policy. The material on this site may not be reproduced, distributed, transmitted, cached or otherwise used, except with prior written permission of Futurism. Articles may contain affiliate links which enable us to share in the revenue of any purchases made.
Fonts by Typekit and Monotype.