The data cache could explain varieties in everything from wines to types of heirloom tomatoes. 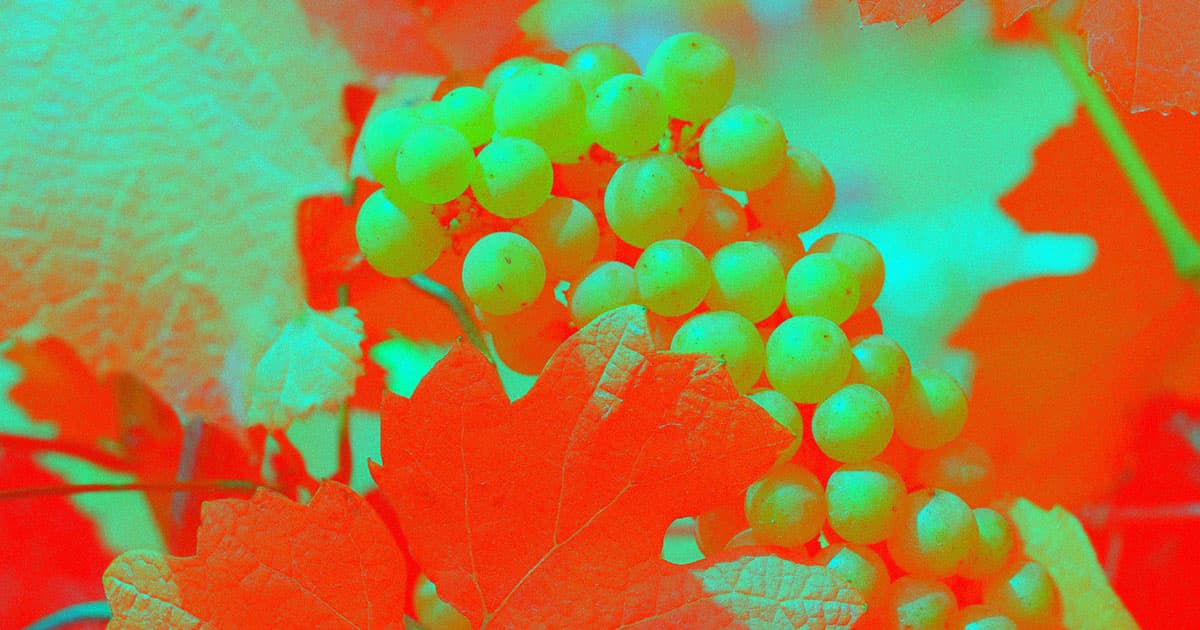 Image by slgckgc via Flickr/Victor Tangermann

That Chardonnay in your glass comes from wine grapes which carry a fascinating genetic quirk.

Researchers in California sequenced the genomes of Chardonnay and Cabernet Sauvignon grapes to compare their genetic similarity and found some genes lacked the expected number of copies. Their findings, published recently in the journal Nature Plants, offered a surprising look at the weird genetics of plants.

"Each of us inherits one copy of their gene from their mother and one from their father," Brandon Gaut, co-lead researcher, said in a press release. "One would assume that the grapes inherit two copies of every gene, too, with one coming from each of their two parents. However, we found there was just one copy, not two, for 15 percent of the genes in Chardonnay, and it was also true of Cabernet Sauvignon grapes."

Chardonnay and Cabernet Sauvignon are each made up of about 37,000 genes. Not only is the research useful for winemakers — particularly, say, on Mars — but it could also offer more clues into how the largely unexplored structural variations in plant genomes alter the fruits and vegetables we consume.

"These genetic differences probably contribute to many of the differences in taste between wines made from different grape varieties," said Darius Canto, the other co-lead researcher.

One of the most drastic differences, and most important to winemaking, was in the number of genes each grape contained which dictate the color of the fruit. It turns out red grapes have mutated into white grapes in multiple instances. The fewer color-related genes a grape inherited increased the likelihood of resulting white grapes.

Gaut explained that "even between the various types of heirloom tomatoes, structural variations could account for differing nutritional values." Further research could also lead to more efficient plant breeding.

Read This Next
Mystery Meat
Lawsuit Claims That Subway "Tuna" Contains Extremely Weird DNA
There They Go
Biotech Company Officially Unleashes Gene-Hacked Mosquitoes in Florida
Gene-Hacked Blood Suckers
Residents Furious at Release of 500 Million Gene-Hacked Mosquitoes
Breaking Models
Scientists Are Having Trouble Keeping Gene-Hacked Creatures Alive
Spider Farm
Scientists Gene-Hacked Bacteria to Make Bullet-Proof Spider Silk
More on Hard Science
Past Particle
Tuesday on the byte
Large Hadron Collider Discovers Strange New Particles
Moved to Tears
Jun 30 on the byte
Scientists Say New James Webb Images Are So Powerful That It Was Emotional Just Looking at Them
Good God
Jun 28 on the byte
Huge Cloud of Toxic Yellow Gas Kills 13
READ MORE STORIES ABOUT / Hard Science
Keep up.
Subscribe to our daily newsletter to keep in touch with the subjects shaping our future.
+Social+Newsletter
TopicsAbout UsContact Us
Copyright ©, Camden Media Inc All Rights Reserved. See our User Agreement, Privacy Policy and Data Use Policy. The material on this site may not be reproduced, distributed, transmitted, cached or otherwise used, except with prior written permission of Futurism. Fonts by Typekit and Monotype.