Scientists Made Mice Hallucinate by Shining Light Into Their Brains

And now they're wondering why humans aren't hallucinating all the time. 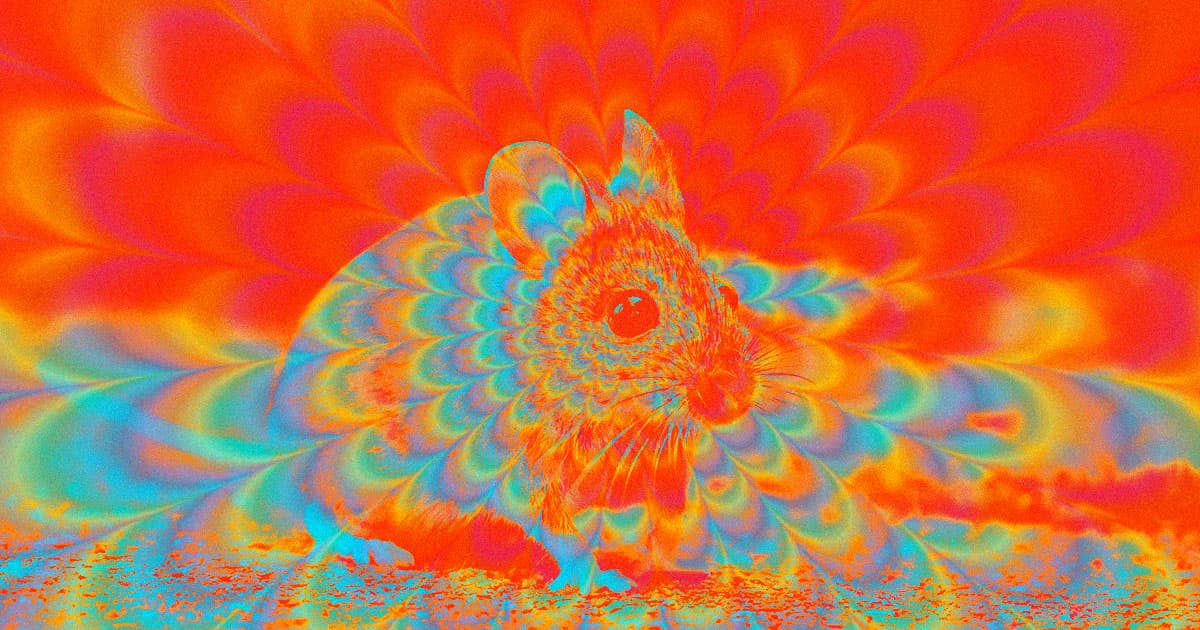 Unless you suffer from a neurological disorder, such as schizophrenia — or like to dabble in psychedelics — chances are you don't spend much time worrying about seeing things that aren't there.

But now, a team led by researchers from Stanford University believes it's found a way to make mice hallucinate without feeding them LSD or magic mushrooms — and the discovery has left them wondering why humans aren't hallucinating all the time.

For their study, published on Thursday in the journal Science, the scientists focused on the visual cortex. That's the part of the mouse — and human — brain that processes information from the retina.

First, they inserted two genes into a number of the visual cortex's neurons in mice. One of these genes encoded a protein that would activate the neuron if hit with a pulse of infrared laser light. The other gene encoded a protein as well, this time one that glowed green whenever the neuron was active.

The scientists then removed part of each mouse's skull over the visual cortex and replaced it with a clear covering, essentially giving themselves a window into the animal's brain.

Next, they trained the animals to take a drink of water from a tube whenever they saw the vertical bar, but not when they saw the horizontal bar.

That was all essentially the preamble to the really exciting part of the study. The scientists then began to decrease the contrast between the black bars and the white background until the mice started having trouble knowing when to get a drink.

At that point, the team projected holograms onto and into the mice's brains through the window in their skulls. They did this using a device they developed specifically for their study that allowed them to control exactly which neurons the particles of light would hit.

Now, when the mice looked at the low-contrast images, they could tell whether they were seeing a vertical or horizontal bar — as long as the scientists zapped the neurons corresponding to the correct alignment at the same time.

Eventually, the scientists did away with the images altogether and found that the animals would take a drink whenever the team activated the vertical bar neurons, but not when they zapped the horizontal bar neurons.

In other words, the scientists seemed to be making the mice hallucinate the image of the bar.

"Not only is the animal doing the same thing, but the brain is, too," researcher Karl Deisseroth of Stanford University said in a press release. "So we know we’re either recreating the natural perception or creating something a whole lot like it."

Perhaps the strangest part of the study is the fact that the researchers only needed to stimulate about 20 neurons to make the mice hallucinate — a surprise finding that raises questions about our own brains.

"A mouse brain has millions of neurons; a human brain has many billions," Deisseroth said. "If just 20 or so can create a perception, then why are we not hallucinating all the time, due to spurious random activity?"

Read This Next
Talk Sense
Scientists Create Holograms You Can See, Hear, and Feel
Futurism
Russia Wants to Vaporize Space Junk With a Laser. There Is No Way This Will Go Wrong.
Futurism
What if Our Universe is a Hologram?
Futurism
Scientists Can Now Turn off Feelings of Thirst in Mice
Futurism
The World's Largest and Most Powerful X-Ray Laser Just Went Online
More on Hard Science
Good God
Yesterday on the byte
Huge Cloud of Toxic Yellow Gas Kills 13
zombie star
Yesterday on futurism
Scientists Puzzled by Star That Exploded in Supernova But Somehow Survived
Life on Mars
Jun 21 on the byte
Physicist Says There's a Small Chance You'll Wake Up on Mars Tomorrow Due to Quantum Physics
READ MORE STORIES ABOUT / Hard Science
Keep up.
Subscribe to our daily newsletter to keep in touch with the subjects shaping our future.
+Social+Newsletter
TopicsAbout UsContact Us
Copyright ©, Camden Media Inc All Rights Reserved. See our User Agreement, Privacy Policy and Data Use Policy. The material on this site may not be reproduced, distributed, transmitted, cached or otherwise used, except with prior written permission of Futurism. Fonts by Typekit and Monotype.