Scientists Have Discovered an Alien Planet That has "Titanium Skies"

This is an "inferno world" that's like nothing we've ever seen. 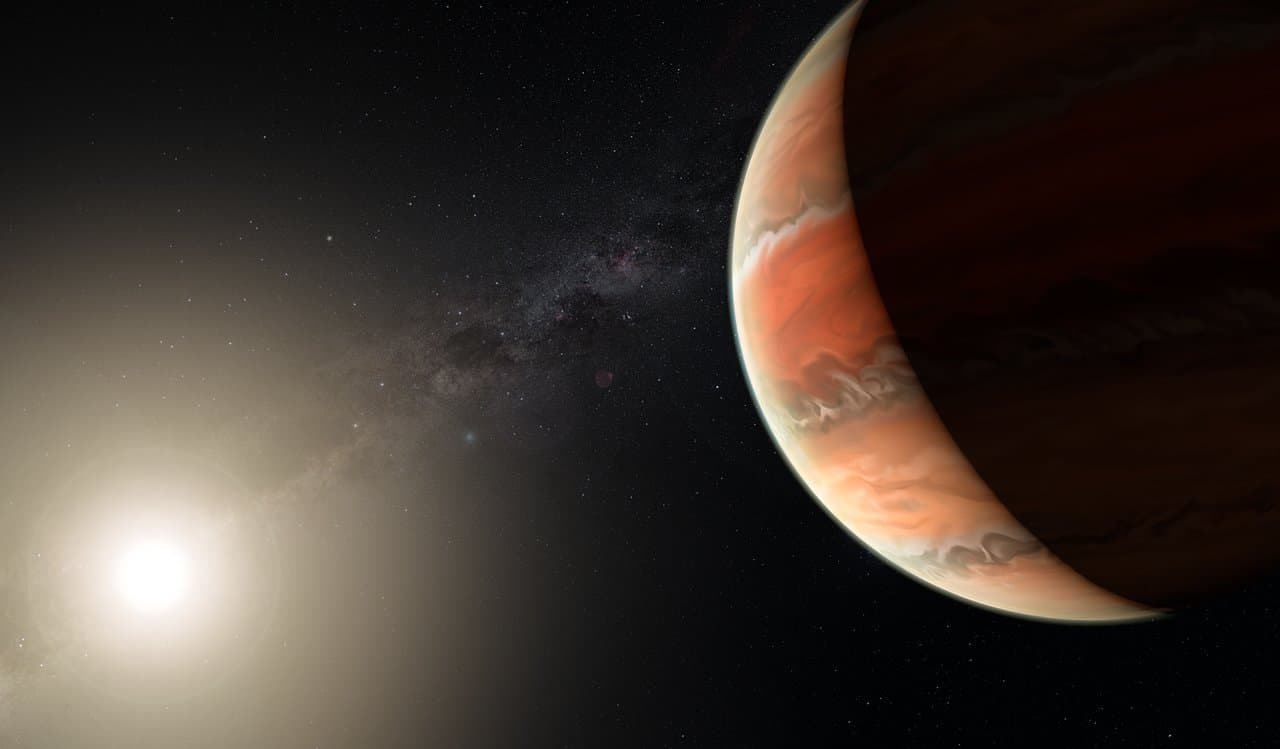 For the first time, astronomers have detected titanium oxide in the atmosphere of an exoplanet. The observation was made using the FORS2 instrument on the ESO’s Very Large Telescope (VLT), and it provides unique insight into the chemical composition of the exoplanet WASP-19b, as well as valuable information about the pressure and temperature structure of its atmosphere.

WASP-19b is a very warm and truly unusual “Hot Jupiter" about 1,000 light-years from Earth. It has about the same mass as Jupiter, but because it is so close to its parent star, it completes an orbit in just 19 hours. This also makes it very hot — the temperature of its atmosphere is estimated at about 2,000 degrees Celsius (3,632 degrees Fahrenheit).

When WASP-19b passes in front of its star, some starlight passes through its atmosphere, leaving “fingerprints” in the light that reach Earth eventually. The team of astronomers was able to analyze these “fingerprints” with the FORS2 instrument on the VLT and deduce that along with a strongly scattering global haze, the atmosphere contained small amounts of water, sodium, and titanium oxide.

The researchers spent more than a year collecting their data on WASP-19b, comparing their observations with atmospheric models to extrapolate the different properties of the exoplanet’s atmosphere. Now, this new data about the presence of titanium oxide, other metal oxides, and other substances can be used to develop improved models of exoplanet atmospheres.

Once astronomers are able to observe the atmospheres of planets that show a higher potential for habitability, these improved models can help them interpret those observations more effectively. These findings also confirm that the refurbished FORS2 instrument is the best tool to handle these kinds of studies from Earth.

As of July 2017, researchers have confirmed the existence of 3,500 exoplanets, with the tally of Earth-like candidates just under 300. But the search for planets that are potentially habitable for humans is far different than the search for alien life in any form.

Over the past two and a half decades, we've discovered an incredible array of diverse exoplanets, and the more we find, the more we see the potential that alien life may be so foreign to us that it's practically unrecognizable. It may be microbic, in subterranean oceans, or buried deep underground.

The very diversity of the exoplanets we have discovered simply reinforces the likelihood that alien life may be nothing like life on Earth — even if it does exist on a rocky planet not so different from ours. For example, what life might inhabit rocky exoplanets whose atmospheres are dominated by some other biosignature gas or gases instead of oxygen and nitrogen?

NASA is searching for signs of such planets right now, and as long as we remain open-minded in our observations, we'll have the best chance of finding what we're looking for.

Read This Next
Absolute Unit
Scientists Discover Gigantic New World that Defies Previous Planetary Understanding
So Close But So Far
Astronomers May Have Spotted a New Planet Around the Nearest Star
Futurism
To Understand The Atmospheres Of Distant Exoplanets, Look To Your Car Engine
Futurism
There's a Planet With a 27,000 Year Orbit, and That's Just the Beginning
Futurism
Oxygen Found on the Moon Could Provide Answers About Ancient Earth
More on Hard Science
Warped Tour
Thursday on futurism
Professor Believes Door to Warp Drive May Lie With Ethylene Glycol
Sky Bursts
Thursday on the byte
Astronomers Intrigued by 25 Mysterious Repeating Radio Signals From Deep Space
Tractor Beam
Jan 26 on the byte
Scientists Build Working Tractor Beam, Although It's Comically Tiny
READ MORE STORIES ABOUT / Hard Science
Keep up.
Subscribe to our daily newsletter to keep in touch with the subjects shaping our future.
+Social+Newsletter
TopicsAbout UsContact Us
Copyright ©, Camden Media Inc All Rights Reserved. See our User Agreement, Privacy Policy and Data Use Policy. The material on this site may not be reproduced, distributed, transmitted, cached or otherwise used, except with prior written permission of Futurism. Articles may contain affiliate links which enable us to share in the revenue of any purchases made.
Fonts by Typekit and Monotype.