Here's Your Critical Guide to the Hospitable Earth-Like Exoplanets

The candidates for humanity's next home are... 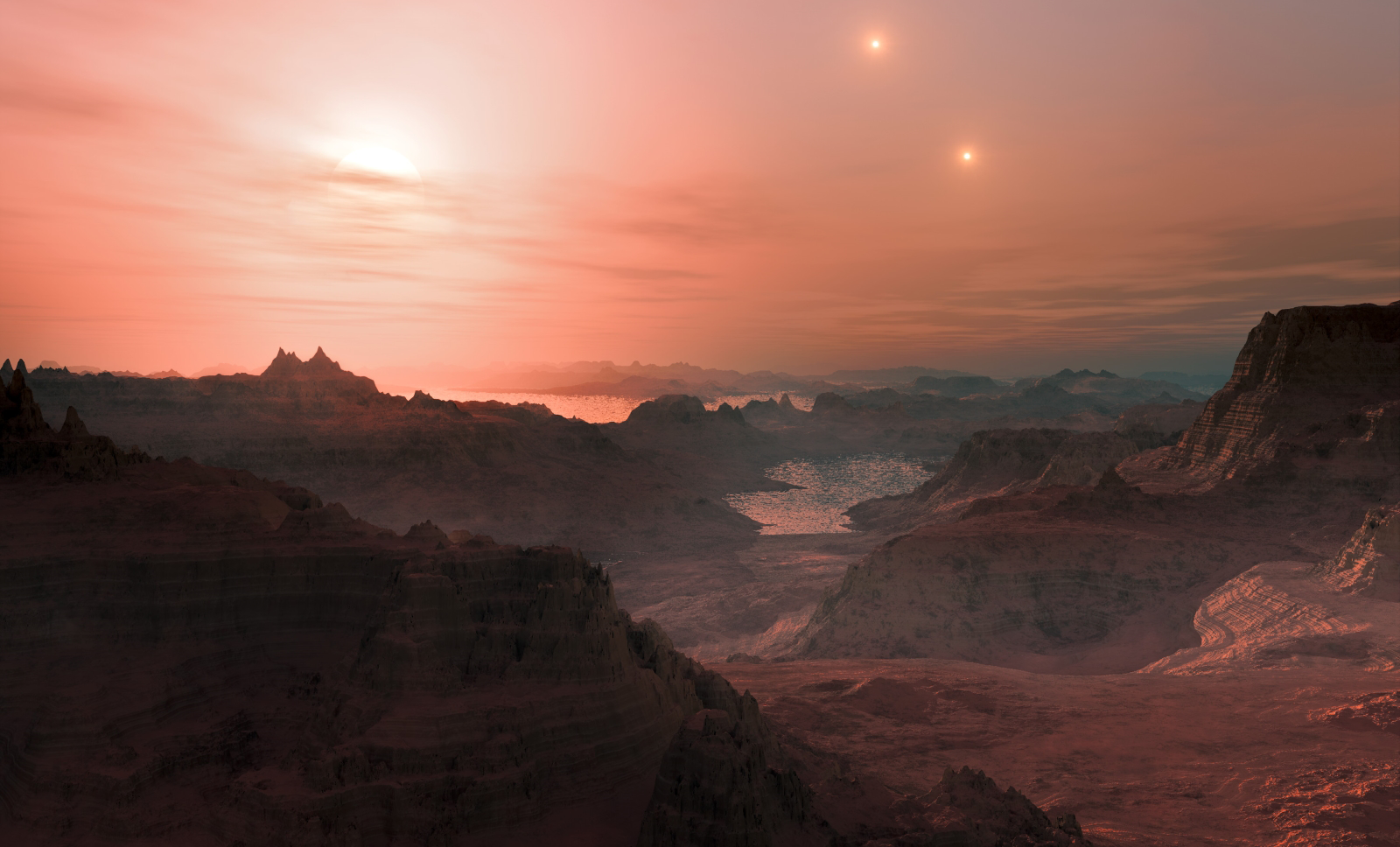 There's a vital human desire to discover and explore other planets like Earth, so the plenum of candidate Earth-like planets is fitting. As of July 2017, there are 3,500 confirmed exoplanets, with the tally of Earth-like candidates just under 300. Once the fringe-dream of groups like SETI, the 21st century has seen world-shattering (literally) progress towards the ultimate goal of confirming the existence of another rocky planet hospitable to human life. We know their distances from Earth, their respective masses, we've come close to determining their surface temperature, and even used cutting-edge chemistry to interpolate their elemental composition and age.

Before diving in, it's worth noting we've yet to find a ride capable of transporting us hundreds of light-years through interstellar space, sans the decades-(if not centuries)-long transit. Nevertheless, finding an extra-solar home-away-from-home has become one of the most popular scientific fields in the world. The first exoplanet in stellar orbit was discovered in 1995. And, there seems to be no end to the dozens of Earth-like exoplanets discovered over the years since NASA's Kepler program began in 2009. Indeed, a collaboration between the European Southern Observatory and NASA led to the discovery of TRAPPIST-1, a star system hosting an astonishing seven Earth-size exoplanets.

In order to qualify for the coveted habitable list, these planets have to be located within the "habitable zone" — the differential diameter around a star wherein the range of surface temperatures allow liquid water to subsist. So without further delay, here are some of the closest candidates for humanity's next home.

Gliese 667 Cc is an exoplanet of the red dwarf star called Gliese 667 C. At 23.62 light-years away, it can be found in the Scorpius constellation, and was found to have a mass that is over three-and-a-half times that of Earth. It was found to be over two billion years old, with a surface temperature of 277 K (4.3 Celsius).

Since it's tidally locked, one side of Gliese 667 Cc receives no sunlight, while the other lives in permanent day under its parent star, Gliese 667 C. According to NASA's Jet Propulsion Laboratory, the exoplanet receives 90 percent of the energy from its star compared to what Earth gets from the Sun, making it theoretically suitable for human life, although not enough is known about its atmosphere to be certain.

With more mass, the gravitational pull is 60% higher than on Earth, plus a thick atmosphere, causing atmospheric pressure to be several hundred times greater. But could there be life? According to the institute of Theoretical Astrophysics at the University of Oslo, only species that tolerate extreme conditions like the tardigrade could survive.

620 light-years away, Kepler-22b orbits the habitable zone of the Kepler-22 system — a star system that shares a lot of similarities with ours. It has an orbital period of 290 days, and a surface temperature of -12 C, assuming it has no atmosphere. The radius is 2.4 times that of Earth, but its composition is still unknown.

NASA's Kepler Space Telescope discovered its first Earth-size planet in the habitable zone of another star in 2014. Unlike the other planets, exoplanets and stars, Kepler-186f is roughly the same size as Earth (only about 10% larger), although its exact composition and mass are not yet known. It is 558 light-years away in the constellation Cygnus, and has an orbital period of 130 days. It only receives one-third of the energy from its star compared to what Earth receives from the Sun, making it considerably colder.

Kepler 452-b orbits its host star in 385 days, is 60% bigger than Earth (often referred to as "super-Earth") and receives roughly the same amount of energy from its star compared to Earth and the Sun. But considering its age (estimated at 1-3 billion years older than the Sun), its surface temperature might be too high for human habitation.

As for the possibility of surface-dwelling life, Jon Jenkins, Kepler data analysis lead at NASA's Ames Research Center says: "It’s awe-inspiring to consider that this planet has spent 6 billion years in the habitable zone of its star; longer than Earth. That’s substantial opportunity for life to arise, should all the necessary ingredients and conditions for life exist on this planet."

It's only 40 light-years away, but the exoplanet system called TRAPPIST-1 remains a pretty big mystery. NASA announced the system's discovery via the Spitzer Space Telescope in February of 2017, and, to our delight, it marked the most Earth-size planets (seven to be precise) orbiting a single star to have ever been discovered. If that wasn't enough, all seven planets orbit within the habitable zone of the TRAPPIST-1 star, allowing for the existence of liquid water.

Although their densities remain unknown, these exoplanets are so close to each other that — with feet firmly planted on one of their surfaces — you might see geographical features of neighboring planets simply by looking up at the sky. However, all the TRAPPIST-1's planets are tidally locked, creating weather systems and temperature fluctuations very difficult, if not impossible, to live in.

Proxima Centauri b (Discovered in 2016)

Roughly the size of Earth and only four light-years away, there's still much to learn about Proxima b, a new planet orbiting one of three stars that make up the greater Proxima Centauri system. At 1.3 times the mass of Earth, Proxima b's year lasts a mere 11 Earth-days.

Since its atmosphere is still unknown, we don't know if it can harbor liquid water. But its exceptional status as the closest, Earth-like planet remains for now unchallenged.

The More to Come

In June 0f 2017, NASA's Kepler Space Telescope team officially added another 219 newly discovered planets to its catalog, ten of which were found within the habitable zone. About 50 of them are about the size of Earth, substantially extending the list of potentially habitable exoplanets.

One of these ten potentially-habitable planets is a super-Earth that orbits around GJ 625 — a red dwarf 21 light-years away. GJ 625 b mass is 2.82 times Earth's. Though the surface is likely Earth-like and rocky, we've yet to gather the sufficient data to determine its status on this growing list of candidates for extraterrestrial life.

Read This Next
Accuracy Wall
Harvard and MIT Scientists Warn That James Webb Data May Not Be What It Seems
Outing Life
Swiss Government Scientist Says We May Be on the Brink of Discovering Alien Life
Sun Gazer
Researchers Want to Use the Sun As a Giant Telescope to Look for Aliens
Space Invaders
Study: There May Be as Many as Four Evil Civilizations in Our Galaxy
Search for Life
Former Astronaut Suggests Specific Planet for James Webb to Search for Life
More on Off World
TTFN
Yesterday on the byte
Skkrt! NASA's Orion Heads Back to Earth, Leaves Moon in the Dust
Icy Comet Eruption
Yesterday on the byte
Astronomers Spot Volcano Erupting on a Distant Comet
RUD-dy
Yesterday on the byte
SpaceX Rocket Engine Explodes In a Green Blast
READ MORE STORIES ABOUT / Off World
Keep up.
Subscribe to our daily newsletter to keep in touch with the subjects shaping our future.
+Social+Newsletter
TopicsAbout UsContact Us
Copyright ©, Camden Media Inc All Rights Reserved. See our User Agreement, Privacy Policy and Data Use Policy. The material on this site may not be reproduced, distributed, transmitted, cached or otherwise used, except with prior written permission of Futurism. Articles may contain affiliate links which enable us to share in the revenue of any purchases made.
Fonts by Typekit and Monotype.