It's adorable — but probably not very filling. 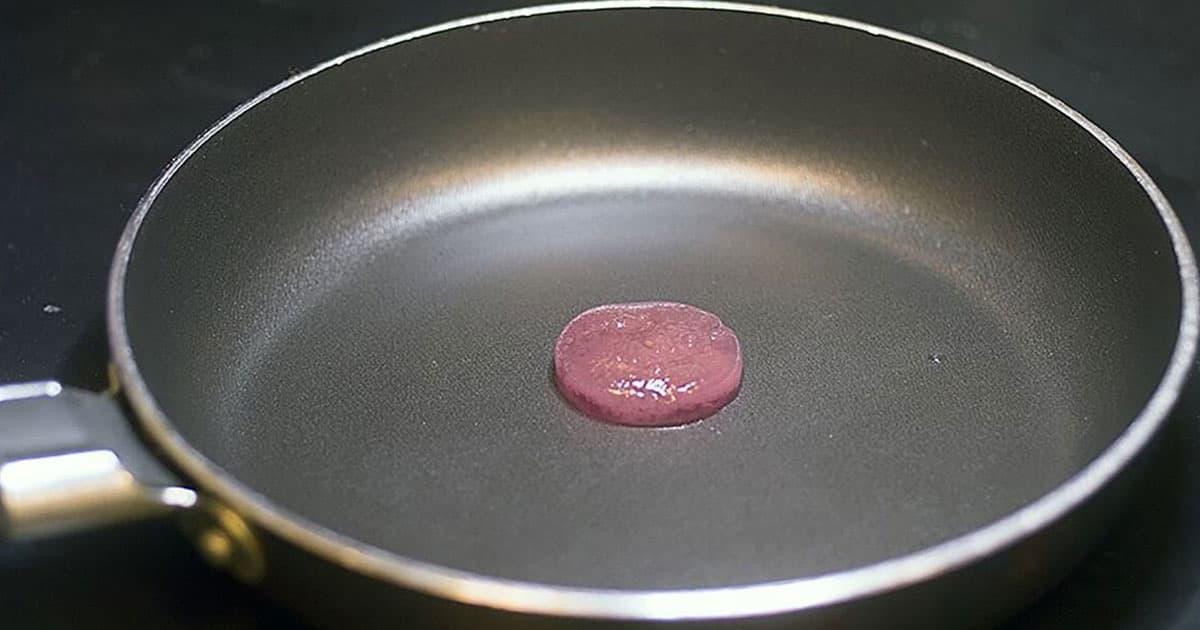 A team of scientists at UCLA say they've cracked the code on how to scale up the creation of lab-grown meat, potentially paving the way for mass production of the environmentally friendly alternative.

But we can't help but feel just a little underwhelmed when looking at the fruits of their labor: a tiny, adorable burger patty that may brown nicely in a pan — but is barely bigger than a quarter, making it lilliputian even by slider standards.

These customized muscle cells could not only make it more feasible to grow these structures into larger, edible tissues, but could also make the process cheaper and faster as well, the team argues in a new paper about the work.

"Animal cells that can be coaxed to form tissues similar to meats could offer a protein source to a world facing food insecurity caused by threats ranging from epidemics to natural disasters," said Rowat in a statement.

While scientists have previously managed to grow ersatz animal flesh in a lab, producing cultured meat at scale for food production has proven far more difficult.

"Cultured meat products are not yet on the market in the US and strategies to enable mass production are still emerging," Rowat added.

Conventional approaches involve growing a scaffold of animal tissues and collagen, an often highly laborious and expensive process. At volume, companies have tried to grow cells in large bioreactors, but the resulting meat slurry tends to lack the texture of the real thing.

So Rowat and her team came up with new "edible microcarriers" that can provide the structure and texture of real meat. Using ingredients such as gelatin and transglutaminase, a "meat glue" that's commonly used as a binding agent, the researchers built special microcarrier enzymes into embossed groove structures that later grew into clumps all by themselves in early tests involving mouse precursor cells.

"We were excited to see a trend toward quicker growth of muscle cells cultured on the grooved microcarriers," said Stephanie Kawecki, a coauthor and one of Rowat's students, in the statement. "Any time reduction of cell culture time can significantly reduce the cost of cultured meat production, especially when these processes are brought to scale."

But there's clearly plenty of work left to be done. As seen in photos in the team's paper, the resulting microtissues, which were "formed into a cohesive meat product" just under an inch across, melted into a brownish puddle when cooked for just under nine minutes on a hot griddle.

Despite the arguably lackluster looking end product, the scientists are excited about the work.

"The fact that we can grow large amounts of protein-rich muscle tissue in a stirred bioreactor is a major step in upscaling the production of true cultured meat," coauthor Sam Norris said in the statement.

In other words, it's one tiny hamburger patty for man, but a huge potential hamburger for mankind.

Read This Next
Futurism
Companies Are Betting on Lab-Grown Meat, but None Know How to Get You to Eat It
Futurism
Researchers Unveiled The First Chicken Meat Grown Without Chickens
Futurism
Lab-Grown Meat: Tyson is Making a Massive Investment in a Meatless Future
Futurism
How Lab-Grown Meat Could Be the Future of Food
More on Earth & Energy
Cow Chow
Yesterday on the byte
Bill Gates Gives $12 Million to Flatulent Australian Cows
Dye in the Water
Yesterday on the byte
Scientists Dye Chunks of Ocean Water Pink for Head-Turning Coastal Experiment
Face/On
Yesterday on the byte
Scientists Found a Dinosaur's Face, Complete With Its Skin
READ MORE STORIES ABOUT / Earth & Energy
Keep up.
Subscribe to our daily newsletter to keep in touch with the subjects shaping our future.
+Social+Newsletter
TopicsAbout UsContact Us
Copyright ©, Camden Media Inc All Rights Reserved. See our User Agreement, Privacy Policy and Data Use Policy. The material on this site may not be reproduced, distributed, transmitted, cached or otherwise used, except with prior written permission of Futurism. Articles may contain affiliate links which enable us to share in the revenue of any purchases made.
Fonts by Typekit and Monotype.