Scientists Confirm Water Vapor Above the Surface of Europa

NASA is investigating Jupiter’s icy moon for signs of life. 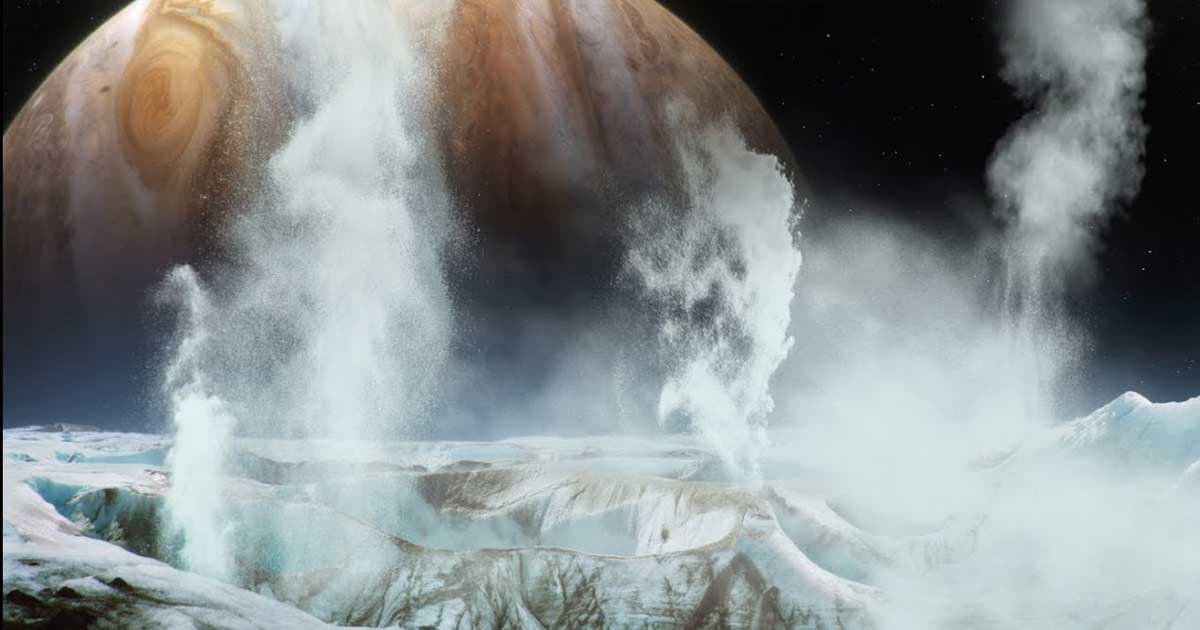 A team led by researchers out of NASA’s Goddard Space Flight Center in Greenbelt, Maryland, has confirmed traces of water vapor above the surface of Jupiter's icy moon Europa.

And that's a big deal as the tiny space rock is one of the highest priority targets in NASA's search for extraterrestrial life, according to the agency.

"While scientists have not yet detected liquid water directly, we’ve found the next best thing: water in vapor form," lead researcher and NASA planetary scientist Lucas Paganini said in a NASA statement.

According to a paper published in the journal Nature Astronomy on Monday, the NASA team discovered enough water vapor being released from Europa to fill an Olympic-size swimming pool within minutes.

But while that sounds like a lot, it was only just enough to be detected from Earth.

Out of 17 observations by the W. M. Keck Observatory in Hawaii, which uses a spectrograph to detect the chemical compositions of other planets' atmospheres by scanning the infrared light they release or absorb, the scientists only spotted water vapor in one.

"We suggest that the outgassing of water vapour on Europa occurs at lower levels than previously estimated, with only rare localized events of stronger activity," Paganini and his team wrote in the paper.

For many years, scientists have suspected that there's water on Europa's surface, and several observations appear to back up that suspicion.

More than two decades ago, NASA's Galileo spacecraft found evidence of an electrically conductive fluid on the moon's surface. Then, a 2018 analysis of the data found evidence of massive plumes of liquid. Data previously collected by NASA's Hubble Space Telescope supported the existence of the plumes.

"We performed diligent safety checks to remove possible contaminants in ground-based observations," Goddard planetary scientist Avi Mandell said of the water vapor discovery in the statement. "But, eventually, we’ll have to get closer to Europa to see what’s really going on."

A mission to do just that is already lined up.

NASA's upcoming Europa Clipper mission will get a much closer look at the icy moon's surface as soon as 2023. The spacecraft will feature a suite of cameras, spectrometers, and a radar to investigate the thickness of Europa’s icy shell during 45 flybys — and perhaps yield further insights into the water vapor above the moon's surface while it's there.

More on Europa: NASA is Sending a Probe to Jupiter’s Icy Moon to Look for Life

Read This Next
Jupiter Ascending
A Wave of Incredible Heat Ripped Through Jupiter
Futurism
The James Webb Space Telescope Is Going to Stare Straight Into Jupiter
Into Darkness
Inside NASA's Bold Proposal to Probe the Mysteries of Dark Matter
Martian Ammonia
NASA Rover Detects Organic Molecules on the Surface of Mars
Myanus, Hisanus, Heranus...
Here's What Uranus Scientists Think About Your Disgusting Jokes
More on Hard Science
Warped Tour
Feb 2 on futurism
Professor Believes Door to Warp Drive May Lie With Ethylene Glycol
Sky Bursts
Feb 2 on the byte
Astronomers Intrigued by 25 Mysterious Repeating Radio Signals From Deep Space
Tractor Beam
Jan 26 on the byte
Scientists Build Working Tractor Beam, Although It's Comically Tiny
READ MORE STORIES ABOUT / Hard Science
Keep up.
Subscribe to our daily newsletter to keep in touch with the subjects shaping our future.
+Social+Newsletter
TopicsAbout UsContact Us
Copyright ©, Camden Media Inc All Rights Reserved. See our User Agreement, Privacy Policy and Data Use Policy. The material on this site may not be reproduced, distributed, transmitted, cached or otherwise used, except with prior written permission of Futurism. Articles may contain affiliate links which enable us to share in the revenue of any purchases made.
Fonts by Typekit and Monotype.