Scientists Bred Male Mice With No Y Chromosomes, and They Can Still Reproduce 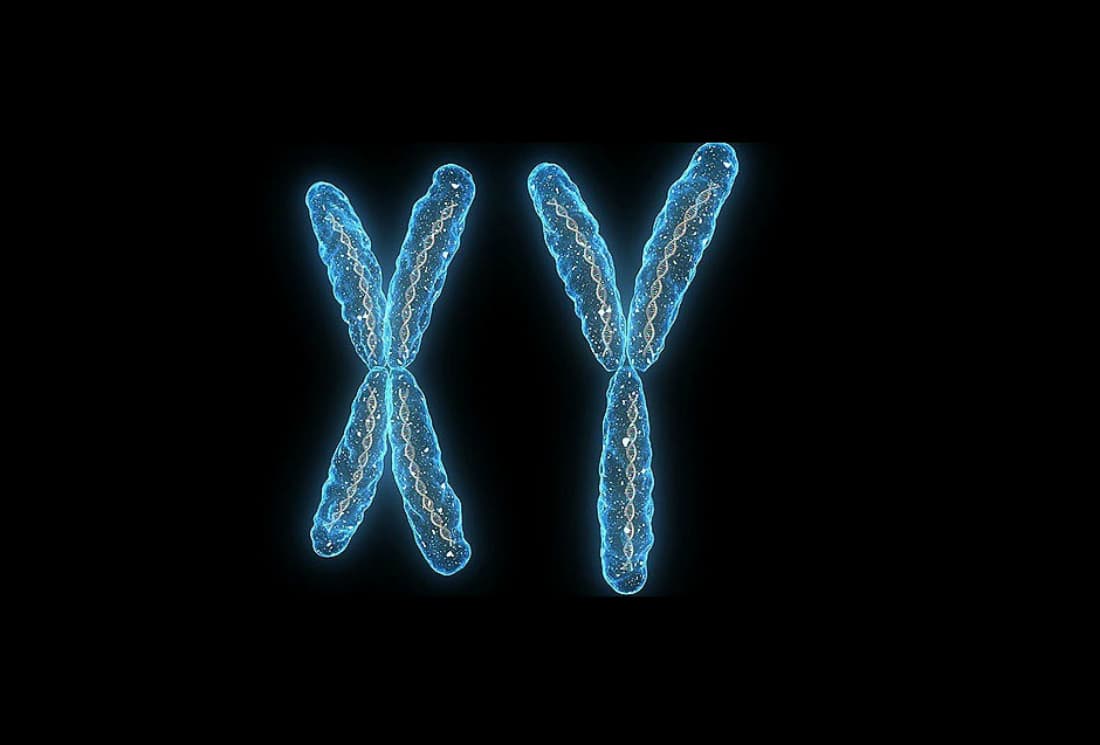 Image by Polarqueen at the English language Wikipedia

One of the most fundamental principles of biology is the following: If an organism inherits the X chromosome it will be a female, and the Y chromosome produces a male offspring. Although there are a few notable exceptions with gynandromorphs,  this is basically how sex functions on a genetic level.

Now, scientists have seemingly changed that.

A team of researchers recently bred male mice that have no trace of Y chromosomes. Notably, the mice are surprisingly healthy and can reproduce (with a little help). This research is relevant as scientists have  found evidence that the Y chromosome has been shrinking at a rather excessive rate over the course of human evolution.

"The X bears about 1,600 genes with varied functions. But the Y has hardly any genes; maybe 50, and only 27 of these are in the male-specific part of the Y," geneticist Jenny Graves from La Trobe University in Australia writes at The Conversation.

"Many are present in multiple copies, most of them inactive, lying in giant loops of DNA. Most of the Y is made of repetitive 'junk DNA'. Thus the human Y shows all the signs of a degraded chromosome near the end of its life."

Still, scientists debate what the ultimate fate of the Y chromosome will be in the long term - if it will stick around for the long haul or be left behind.

The results of this study have been published in Science.

A life without Y chromosomes

Back in 2013, researchers led by reproductive biologist Monika Ward from the University of Hawaii wanted to figure out exactly how the Y chromosome influenced a growing embryo and induced it to develop into a male. They narrowed all the genes down to just two genes: SRY and Eif2s3y.

The SRY gene, discovered in 1990, is responsible for initiating the development of testes - babies with Y chromosomes that have mutated SRY genes have been found to develop into females. Eif2s3y, on the other hand, is responsible for kick-starting the production of sperm.

And there you have it, testes and sperm all taken care of.

Kaleigh Rogers explains, "SRY was replaced with a gene that is usually activated by SRY, and is 'next in line', Ward said. Instead of leaving SRY to activate this gene, the researchers activated it manually. Eif2s3y was replaced by over-expressing the X chromosome gene that works in tandem to tell the mouse to start producing sperm."

The resulting males aren’t exactly the virile studs a potential female suitor would be interested in though - not only are their testes smaller than usual, but their sperm has a few issues. In short, their sperm were all tail-less, which meant it was effectively impossible for these males to reproduce without some assistance.

It took at least five copies of the X chromosome version of the Eif2s3y to produce a low quality sperm and only one copy of the Eif2s3y genes from Y chromosomes are required to make a lot of healthy sperms." This indicates that the Y chromosome gene is the strong one," Ward told Tina Hesman Saey at Science News. This is important because it makes a case for whether or not the Y chromosome is going to stick around indefinitely, or drop out of our genome in the next few million years or so.

The arguments seem to go both ways.

"Our work does not support that the Y chromosome will disappear," Ward told Herman Saey, because it’s so much more efficient than the X-chromosome substitutes, so it doesn’t make a whole lot of sense, from am evolutionary standpoint, to get rid of it.

However, Graves says the results of the study only further prove her point that humans could possibly lose the Y chromosome. "[It’s] a lovely example of how you can lose even a really important gene", she said of the study, adding that it "give[s] us useful information about what happens at the end of the life of the Y chromosome".

It’s true that some vertebrates have evolved entirely different systems for reproducing, without the X = female, Y = male system. So far, two species of rodent have been found breeding in the wild with zero Y chromosomes, as have some reptiles. And there are also some species of birds and snakes that have adopted a completely completely different kind of sex gene, with ZZ males and ZW females.

Wards still believes that there is more to the Y chromosome that we have yet to discover. "All of the other genes on the Y chromosome are responsible for something - male fitness, sperm production, sperm count," she told Motherboard. "We’re not trying to eradicate the Y chromosome or males. I’m actually looking forward to many years of studying it, so I want Y chromosomes."

Read This Next
Mystery Meat
Lawsuit Claims That Subway "Tuna" Contains Extremely Weird DNA
There They Go
Biotech Company Officially Unleashes Gene-Hacked Mosquitoes in Florida
Gene-Hacked Blood Suckers
Residents Furious at Release of 500 Million Gene-Hacked Mosquitoes
Wine Mom
Scientists Sequence Genomes of Chardonnay and Cabernet Sauvignon
Breaking Models
Scientists Are Having Trouble Keeping Gene-Hacked Creatures Alive
More on Hard Science
Tractor Beam
Thursday on the byte
Scientists Build Working Tractor Beam, Although It's Comically Tiny
Having a Blast
Jan 18 on the byte
New Study Shows Where You Should Hide to Survive a Nuclear Attack
Offworld Amino
Jan 15 on the byte
Scientists Find Building Blocks of Life in Meteor That Smashed Into Family's Driveway
READ MORE STORIES ABOUT / Hard Science
Keep up.
Subscribe to our daily newsletter to keep in touch with the subjects shaping our future.
+Social+Newsletter
TopicsAbout UsContact Us
Copyright ©, Camden Media Inc All Rights Reserved. See our User Agreement, Privacy Policy and Data Use Policy. The material on this site may not be reproduced, distributed, transmitted, cached or otherwise used, except with prior written permission of Futurism. Articles may contain affiliate links which enable us to share in the revenue of any purchases made.
Fonts by Typekit and Monotype.