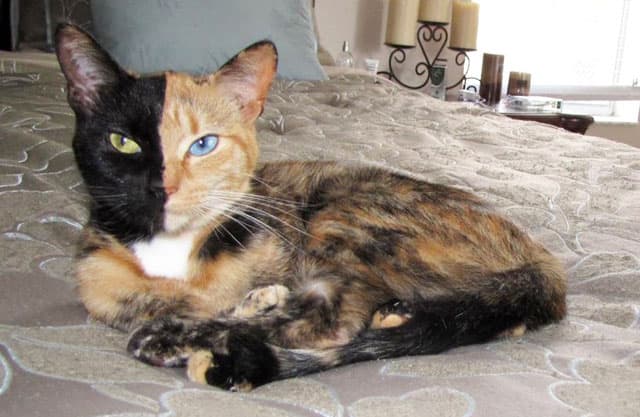 In Western society, we see the world and being composed of two sexes: Males and females. The chromosomes of an animal determine whether it is male or female. Women have two XX chromosomes and men have an X and a Y chromosome. The binary between men and women seems pretty straight forward and simple; however, sex is far more complex than it initially seems. There are several organisms that are able to change their sex; there are other organisms that are intersex, which means that (because of chromosomal abnormalities) the organism cannot be distinctly identified as either male or female. Many chromosomal abnormalities cause serious genetic defects that can lead to death, or which may cause significant health issues.

Yet, this particular abnormality in sex chromosomes can sometimes express itself in ways that are amazingly beautiful. In extraordinary cases, some animals have each chromosome (the male and the female) in very particular physical regions on their bodies. Meet the gynandromorphs — parts of their bodies are male the other parts are female.

In perfect bilateral gynandromorphism, the creature's body is divided in a line down the center. One side is male and the other side is female. However, such conditions are exceedingly rare. It is also possible for these chromosomes to express themselves in different locations externally. Gynandromorphism has never been discovered in humans; however, it's expressed in a number of other creatures. Some scientists believe that gynandromorphs are chimeras. In insects, this condition may be  caused because two sperm enter one egg. As a result, one sperm fuses with the nucleus and creates a female insect, the other continues on alone and creates a male insect — both are at work in one body. In birds it is believed that gynandromorphism is caused by an inability of the sex chromosomes to separate when the newly-fertilized cell first splits in two.

2. The Half Blue Lobster

4. The Red and White Bird