Turns Out Schrödinger, the Father of Quantum Physics, Was a Pedophile

He was a monster. 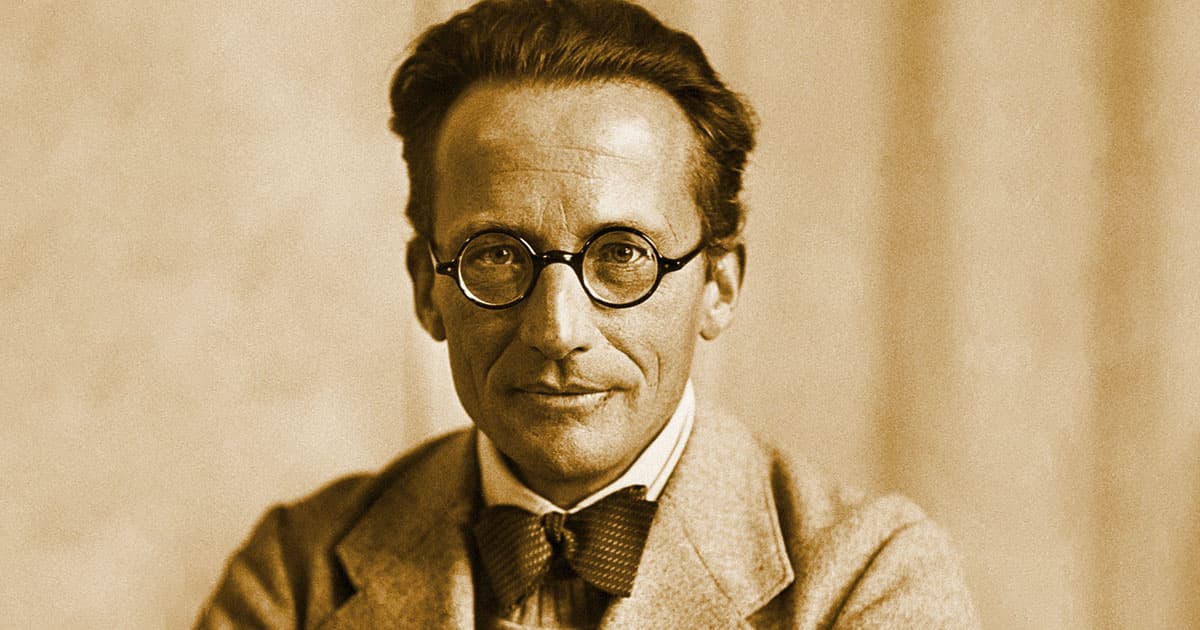 A recent investigation that resurfaced damning evidence that famed physicist Erwin Schrödinger was a pedophile is continuing to make waves in the academic community.

Schrödinger, widely cited as the father of quantum physics and perhaps best remembered for his 1935 thought experiment "Schrödinger’s Cat," was widely revealed to be a pedophile by The Irish Times after the newspaper published a report detailing his record as a sexual predator and serial abuser.

It's a stomach-churning revelation about a researcher whose work revolutionized the study of the natural world and even led directly to today's international research frenzy into quantum computing — and which shows, once again, that even the powerful and brilliant can be monsters.

The Irish Times identified young girls who Schrödinger became infatuated with, including a 14-year-old girl whom the physicist groomed after he became her math tutor.

Schrödinger, who died in 1961, later admitted to impregnating the girl when she was 17 and he was in his mid-forties. Horrifyingly, she then had a botched abortion that left her permanently sterile, according to the newspaper.

Perhaps most diabolically, the physicist kept a record of his abuse in his diaries, even justifying his actions by claiming he had a right to the girls due to his genius.

Walter Moore, author of the biography "Schrödinger, Life and Thought" published in 1989, said that the physicist's attitudes towards women "was essentially that of a male supremacist." Disgustingly, the biography seemed to downplay and even romanticize his abusive habits, and describes him as having a "Lolita complex."

Schrödinger also attempted a relationship with a different 12-year-old girl, disgustingly writing in his journal that she was "among the unrequited loves of his life." However, he decided not to pursue her after a family member voiced their concerns that the physicist was a, you know, unrepentant abusive predator.

In response, a petition has been launched to change the title of a lecture hall at Dublin’s Trinity University that’s named after him.

"We can acknowledge the great mark Schrödinger has left on science through our study, and this petition does not wish to diminish the impact his lectures or ideas had on physics," the petition says. "However, it seems in bad taste that a modern college such as Trinity... would honor this man with an entire building."

That's true, of course. You can recognize the contributions someone has had in their field while also acknowledging that they were an absolute scumbag.

But honoring them by naming a lecture hall — or a giant space telescope — is completely unnecessary.

More on horrible men: James Webb Hated Gay People. Why Are We Naming a Telescope After Him?

Read This Next
Heady Stuff
Experiment Suggests That Consciousness May Be Rooted in Quantum Physics
Space and Stuff
Scientists Say the Universe Itself May Be "Pixelated"
Multidimensional Cats
This Physicist Believes There Are Countless Parallel Universes
Paradox Lost
Scientists Predict Quantum Jumps, Turning Physics on Its Head
Reality Bites
Quantum Physics Experiment Suggests That Reality Isn't Objective
More on Hard Science
Quacks Like a Duck
Thursday on futurism
Those Headlines About Scientists Building a Wormhole Are Total Nonsense, People
It From Bit
Nov 22 on the byte
A Scientist Is Crowdfunding an Experiment to Check if We Live in a Simulation
Water Carrying
Nov 20 on the byte
Evidence Grows That Soggy Meteorites Gave Earth Its Oceans
READ MORE STORIES ABOUT / Hard Science
Keep up.
Subscribe to our daily newsletter to keep in touch with the subjects shaping our future.
+Social+Newsletter
TopicsAbout UsContact Us
Copyright ©, Camden Media Inc All Rights Reserved. See our User Agreement, Privacy Policy and Data Use Policy. The material on this site may not be reproduced, distributed, transmitted, cached or otherwise used, except with prior written permission of Futurism. Articles may contain affiliate links which enable us to share in the revenue of any purchases made.
Fonts by Typekit and Monotype.