It would solve a mystery involving the planet's powerful jet streams. 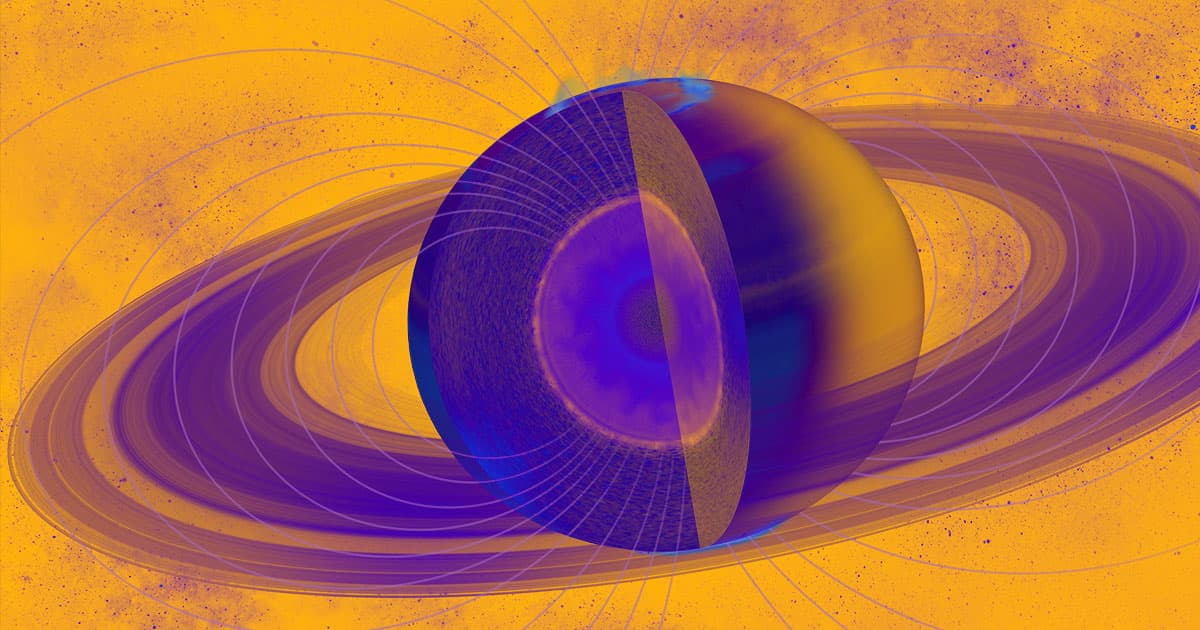 In 2017, the Cassini spacecraft plunged into Saturn, ending an exploratory mission that had lasted nearly two decades.

But even that final act has proven incredibly useful to scientists, some of whom have now used the data from Cassini's final transmission to make a remarkable discovery about Saturn: the gas giant's liquid interior might be viscous, flowing "like honey."

First, here's some of what we already knew about Saturn prior to Cassini's death dive.

When Cassini dove into Saturn, it measured the planet's gravitational field. Using those measurements, scientists determined that the jet streams stopped about 8,500 kilometers (5,281 miles) inside the planet — but no one knew why the winds stopped at that particular depth.

Now, in a new study published in the journal Physical Review Fluids, an international team of researchers details a theoretical model of Saturn that they say could provide the answer.

"Deep into Saturn, where the pressure is high, the gas becomes a liquid that conducts electricity and is more strongly influenced by the planet's magnetic field," researcher Navid Constantino said in a press release. "An electrically conducting, flowing liquid will bend or distort a magnetic field. We showed that the distortion of the magnetic field makes the fluid more viscous, like honey."

The researchers believe this viscosity might be the reason the jet streams can't reach any further into Saturn. And while they plan to conduct more studies to test the theory, they're already encouraged by the results they've seen so far.

"The mysteries of what goes on inside Saturn and the other gas giants in our Solar System are now slowly starting to be unveiled," Constantinou said. "Our findings provide a promising way for interpreting the data from planetary missions and offer a better understanding of the planets in our Solar System and beyond."

Read This Next
Titan Farts
NASA Scientists Spot "Really Unexpected" Molecule in Atmosphere of Saturn's Largest Moon
Giant Snowball
NASA Finds Evidence of "Fresh Ice" on Saturn's Moon Enceladus
Crusty Moon
Astronomers Say They Found "Dry Lake Beds" on Saturn's Moon Titan
Futurism
We May Finally Understand How Alien Life Could Survive on Saturn's Moon
More on Hard Science
Warped Tour
Thursday on futurism
Professor Believes Door to Warp Drive May Lie With Ethylene Glycol
Sky Bursts
Thursday on the byte
Astronomers Intrigued by 25 Mysterious Repeating Radio Signals From Deep Space
Tractor Beam
Jan 26 on the byte
Scientists Build Working Tractor Beam, Although It's Comically Tiny
READ MORE STORIES ABOUT / Hard Science
Keep up.
Subscribe to our daily newsletter to keep in touch with the subjects shaping our future.
+Social+Newsletter
TopicsAbout UsContact Us
Copyright ©, Camden Media Inc All Rights Reserved. See our User Agreement, Privacy Policy and Data Use Policy. The material on this site may not be reproduced, distributed, transmitted, cached or otherwise used, except with prior written permission of Futurism. Articles may contain affiliate links which enable us to share in the revenue of any purchases made.
Fonts by Typekit and Monotype.