This gun can disable any intruder without injuring them. 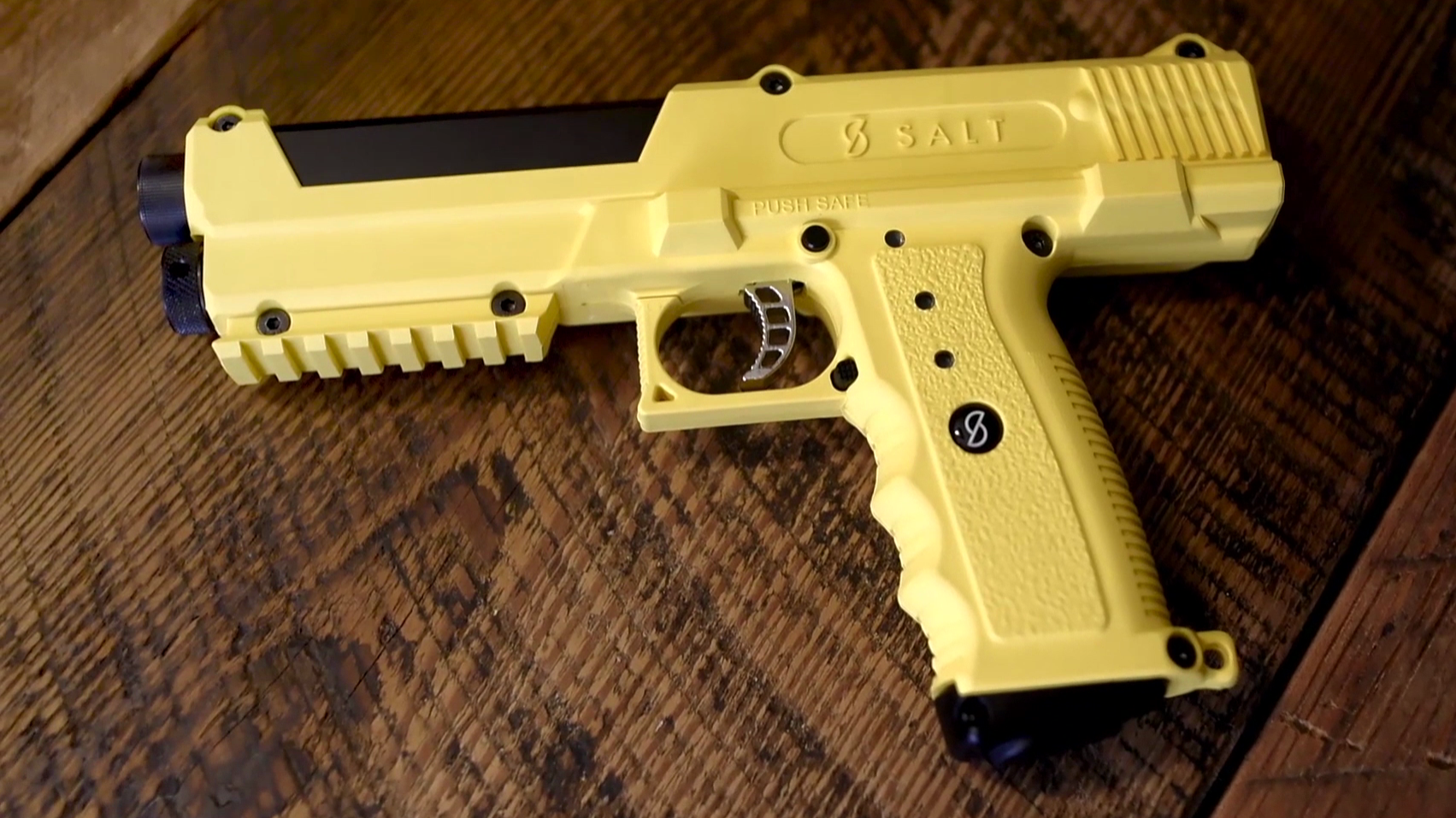 While defensive weapons allow us to ward off offensive blows—to protect ourselves from attacks—offensive technologies actually harm (and sometimes kill) the enemy. Historically, getting better at building weapons has meant getting better at killing. Case in point: We have remote controlled vehicles that can launch rockets. We have machine gun wielding robots. We even have self-guided bullets that can turn midflight.

But one company is making a new kind of offensive tech, one that can render attackers defenseless without causing serious harm. It's known as Salt, and it's a gun that anyone can use for protection—no permit required.

A New Kind of Salt

Salt was co-founded by Adam Kennedy in 2015, and in a recent interview, he noted that one of the main points driving the company was a desire to develop a product that offered viable protection and which everyone would feel comfortable using.

The problem, Kennedy asserts, is that traditional guns require a lot of training in order to use them safely and effectively. Moreover, a number of individuals are "gun-shy;" they are scared of using firearms. He clarifies the issues, "the bad thing about a gun is that it takes a lot of practice to really get used to it, and even then, there are a lot of accidents that can happen, and it's permanent...there are things like suicide and domestic violence...also, they are rather loud and seem 'violent' when you shoot them. It's not a very good user experience, and this means that, from a product point of view, the people who need it the most are the least likely to use it. Then, even if you get used to the weapon and know how to you use it, people have a hard time responding when asked, 'are you willing to kill somebody?'"

Really, the list of issues goes on and on.

Of course, there are alternatives; however, other offensive technologies don't offer the same kind of security as traditional guns. For example, Kennedy notes that things like pepper spray, tasers, bats...none of them are effective at a distance. "Pepper spray is very good at debilitating people," he asserts, "but the problem is that it’s really all about defense and no offense. You have to wait for the person to get really close to you before you can do anything."

Kennedy and his team overcame these various issue by creating a weapon that combines the non-lethal protection of pepper spray with the long-range accuracy and efficiency of traditional firearms.

To that end, Salt is a pepper spray gun. All of the rounds are filled with a non-lethal powdered that consists of pepper spray and tear gas. These rounds break on contact, "immediately causing temporary blindness, difficulty breathing, and severe impact distress."

Kennedy can actually verify the effectiveness of the device, as he's tried all iterations on himself. "It basically took us two and a half years to get the product ready for market. Those were a very interesting few years, as I have tested every single variation of every round we have ever done on myself." And such tests weren't exactly fun.

"The gun has the same force as a 50 mile an hour fastball hitting you [unlike a traditional liquid pepper spray, a Salt Round travels at 320 feet per second], so it has a ton of kinetic force. While there’s no threat of lethal action, there’s just not enough joule-load to do that, it leaves quite a bit a damage on your skin."

It's All About Choice

Kennedy went to lengths to emphasize that their intent isn't to replace traditional firearms—or pepper spray, for that matter. Rather, their goal was to create alternative options for individuals. "The number one goal of our company is just to keep you and the people that you love safe," Kennedy notes. And because of the nature of the tech, buyers don't need to have a background check in order to purchase one.

Moreover, the weapon comes in a variety of styles. There is the standard black gun, which looks just like a traditional gun. And now, the company is unveiling a yellow version of the product, which clearly sets it off from other firearms. If you want to give the product a try, you can purchase one here.

Read This Next
Biological Code
The World's First Reprogrammable DNA Computer is Here
Virtual Combat
The U.S. Army Is Using Virtual Reality Combat to Train Soldiers
Worst Timeline
Russia's Latest Weapon: A Laser Cannon
Futurism
The World’s First Practical Quantum Computer May Be Just Five Years Away
Futurism
With Bees Scarce, A Drone Pollinates A New York Apple Orchard
More on Robots & Machines
From the Dept. of...
12:00 AM on futurism
The Best Wireless Mouse of 2023
Balloon Boy
Yesterday on the byte
Other Chinese Balloons Apparently Flew Over America, But Nobody Noticed Them
From the Dept. of...
Yesterday on futurism
The Best Desks of 2023
READ MORE STORIES ABOUT / Robots & Machines
Keep up.
Subscribe to our daily newsletter to keep in touch with the subjects shaping our future.
+Social+Newsletter
TopicsAbout UsContact Us
Copyright ©, Camden Media Inc All Rights Reserved. See our User Agreement, Privacy Policy and Data Use Policy. The material on this site may not be reproduced, distributed, transmitted, cached or otherwise used, except with prior written permission of Futurism. Articles may contain affiliate links which enable us to share in the revenue of any purchases made.
Fonts by Typekit and Monotype.