Their design can go for 100 days, carrying out multiple missions sans human touch. 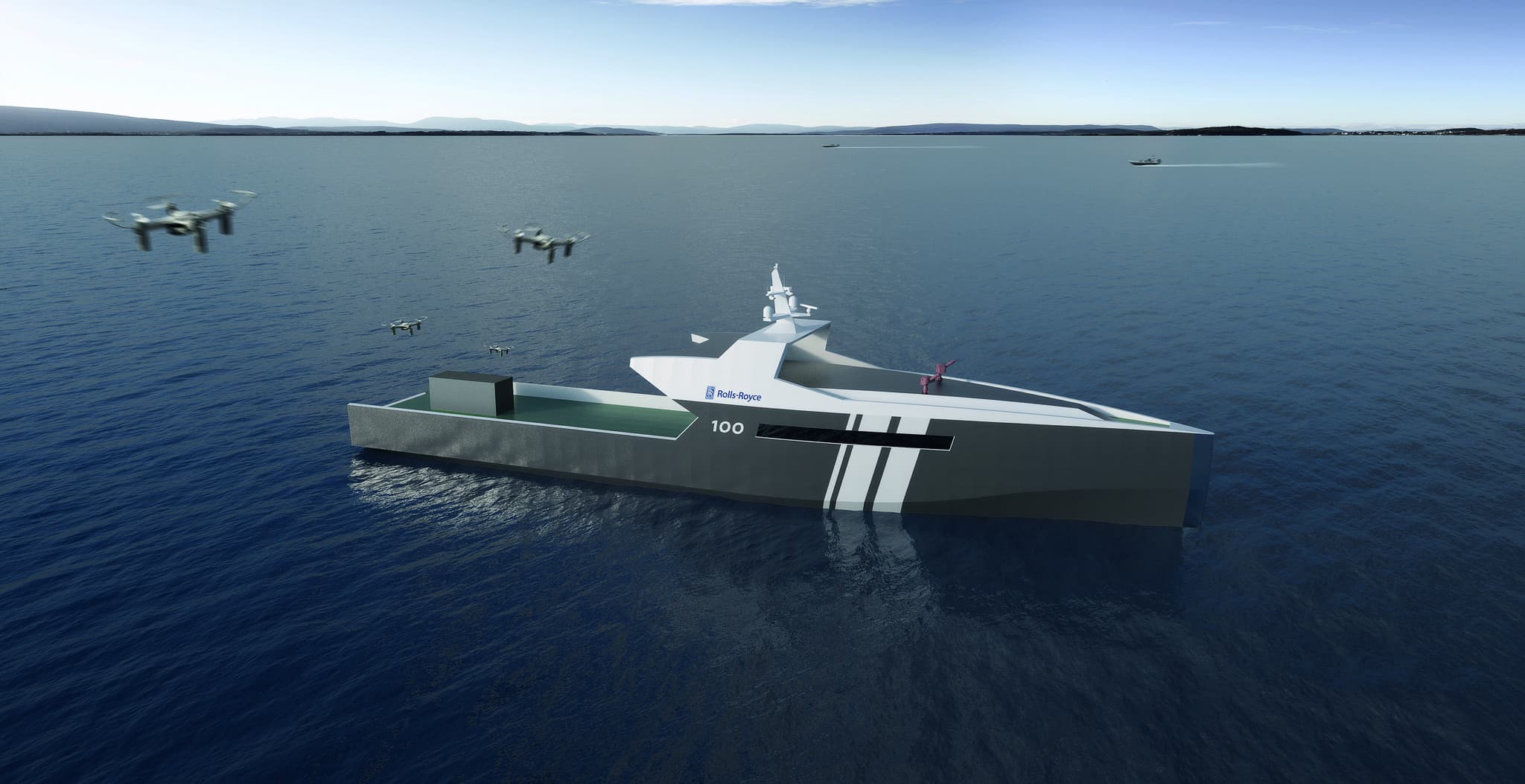 From Cars to Ships

Rolls-Royce, a brand typically associated with luxury cars, may soon have ties to sophisticated naval ships.

Yesterday the company revealed its desire to build an autonomous naval ship that would reduce the risk to crews, as well as cut down on operating costs. Coming in at 60 meters (196 feet) long, the ship would be able to reach speeds above 25 knots (28 mph), travel over 3500 nautical miles, and operate for over 100 days as it completes patrolling & surveillance, mine-detection, or fleet-screening missions.

A fully-electric 1.5MW propulsion system comprised of two Rolls-Royce MTU 4000 Series generators would provide the ship with around 4MW electrical power. A series of solar panels and 3000 kWh of energy storage would allow it to loiter around for as long as necessary, while also collecting additional energy.

A combination of artificial intelligence (AI) and sensors will be implemented to operate the vessel, with multiple systems and tools installed to allow the ship to gracefully switch between roles mid-mission.

“The operational profile of these platforms will be more complicated than commercial unmanned vessels,” says Benjamin Thorp, general manager of Rolls-Royce Naval Electrics, Automation and Control. “They will be expected to sail from A to B on patrol, avoiding ships and other navigational hazards.

"At some point between A and B, they will detect something, maybe a submarine, and the mission will change to tracking and surveillance. The power and propulsion system will then need to adopt an ultra-quiet mode to avoid detection.”

Unmanned ships are not expected to replace manned ships, however. They will instead be mixed in with current fleets to offset operational costs — autonomous ships will be used for single-role missions, while crewed ships will handle missions requiring multiple roles. There's also potential for models that are used solely to carry cargo.

As noted by Engadget, Rolls-Royce hasn't revealed any partnerships yet, but has said there's been an increased interest from major navies. The company has been leading the discussion about autonomous ships this year, and expects to see unmanned vessels incorporated into navy fleets over the next 10 years.

Read This Next
Critical Flaws
Tesla Reportedly Sold Batteries It Knew Could Catch Fire
Shuttle Butt
We Took a Ride on NYC's First Self-Driving Shuttle
Dangerous Autonomy
Video Shows Tesla Autopilot Steering Toward Highway Barriers
Tiltrotor Down
A "Tiltrotor" Helicopter May Replace the Army's Black Hawk
Easy Access
Apple Patented Facial Recognition to Unlock Your Car
More on Advanced Transport
High Tide
Yesterday on the byte
We’re in Awe of Amsterdam’s Huge Underwater Bike Parking Garage
Quelle Surprise!
Thursday on the byte
Of Course Elon Musk Is Pushing The Cybertruck Back Again, What Did You Expect?
Stay Away
Wednesday on the byte
New SUV Features Electrified Door Handles and Pepper Spray Guns
READ MORE STORIES ABOUT / Advanced Transport
Keep up.
Subscribe to our daily newsletter to keep in touch with the subjects shaping our future.
+Social+Newsletter
TopicsAbout UsContact Us
Copyright ©, Camden Media Inc All Rights Reserved. See our User Agreement, Privacy Policy and Data Use Policy. The material on this site may not be reproduced, distributed, transmitted, cached or otherwise used, except with prior written permission of Futurism. Articles may contain affiliate links which enable us to share in the revenue of any purchases made.
Fonts by Typekit and Monotype.