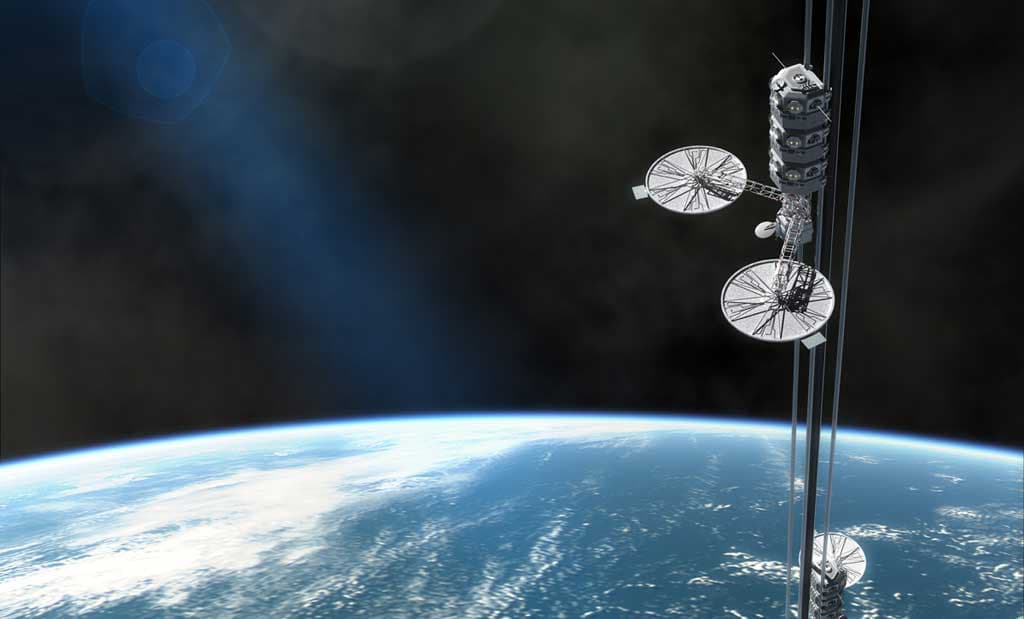 Today, in order to get to the Moon, an incredible logistical setup is required. From the training needed for astronauts, to the millions of dollars of equipment necessary for space travel, to the cost of rocket fuel—Space flight isn't easy (or cheap). But what if one can reach the Moon by simply stepping into a small vehicle attached to a cable and pressing a button that says “Moon.” Well, that would be nice, but it would be a rather long trip with a number of staggering hurdles. Still, it might be possible to do something like this to get to space (or at least near space).

If what you’re imagining is an elevator, then you are right.

Ultimately, this is an idea that several scientists have been trying to realize since 1895, though it has existed as little more than science fiction for most of this time. We have written a number of articles on the feasibility of this tech in the past. Now, with what researchers from the Pennsylvania State University discovered, we may be taking a step closer to achieving that idea.

When they applied alternating cycles of pressure to isolated, liquid-state benzene molecules, surprisingly, it was found that rings of carbon atoms assembled into neat and orderly chains, essentially forming strong ultra-thin diamond nanothreads.

Initially, the benzene molecules were expected to react in a disorganized way. Instead, they formed a thread 20,000 times smaller than a strand of human hair.

An immediate implication was that these diamond nanothreads, which are remarkably light and strong, could be an ideal material for a space elevator, one that is anchored on Earth and reaching into space to attach to a satellite in orbit. Moreover, a team from the Queensland University of Technology in Australia modeled the diamond nanothreads using large-scale molecular dynamics simulations. It was concluded that the material is far more versatile than previously thought and has great promise for aerospace properties.

One of the major problems with a space elevator is that we need a cable that can hold up its own weight – all 35,000 km (22,000 miles) of it—or thereabouts. Because gravity decreases the farther away from Earth you are, the tensile strength for the cable needs to be able to support roughly 5000  km (3,000 miles) of itself. That's a lot of weight.

Radiation shielding is also a must for any passengers and sensitive goods, due in part to the Van Allen radiation belts, regions where charged particles are held by the Earth’s magnetic field. So there are , of course, still issues to overcome (a whole lot, actually); however, this kind of material could take us a step closer to solving at least one problem.

See the researcher discuss the material in the video below.

Read This Next
Hall Effect
Test Suggests Ion Thrusters Could Power Crewed Interplanetary Missions
Rolling Coal
Space Travel Will Absolutely Gut the Environment, Scientists Warn
Going Up, Going Down
Professor Says We Could Already Build a Floating Space Elevator
Going Up?
These Researchers Want to Run a Cable From the Earth to the Moon
Brands We Love
‘Spaceteam’ Turns the Horrors of Deep Space Travel Into a Fun Card Game
More on Off World
Final Selection
Yesterday on the byte
NASA Finalizing Secretive Decision on First Astronauts for the Artemis Moon Mission
CHON: Legacy
Jan 29 on the byte
James Webb Discovers Coldest Ice in Known Universe, Harboring Molecules Essential For Life
Is There?
Jan 29 on the byte
NASA Setting Up Facility For Mars Rock Samples That Might Contain Alien Life
READ MORE STORIES ABOUT / Off World
Keep up.
Subscribe to our daily newsletter to keep in touch with the subjects shaping our future.
+Social+Newsletter
TopicsAbout UsContact Us
Copyright ©, Camden Media Inc All Rights Reserved. See our User Agreement, Privacy Policy and Data Use Policy. The material on this site may not be reproduced, distributed, transmitted, cached or otherwise used, except with prior written permission of Futurism. Articles may contain affiliate links which enable us to share in the revenue of any purchases made.
Fonts by Typekit and Monotype.