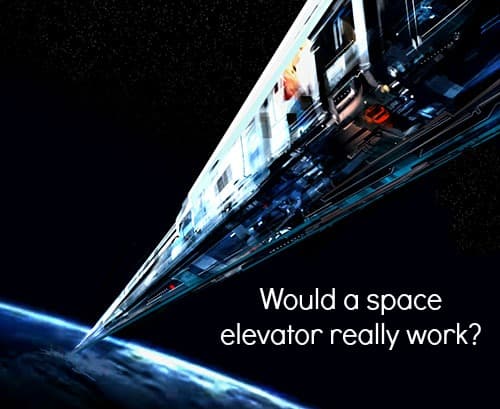 In order to get into space, we have very few options. Actually, we currently only have one. We put people in a sophisticated vehicle, strap them on top of a horrific amount of fuel, and light a fuse, igniting a drawn-out explosion. So far this has been largely effective, but the associated risks and costs are a bit of a drawback.

Naturally, we must ask ourselves, "Are there any alternatives?" There are currently a few ideas being entertained, each with varying degrees of plausibility. The most endearing of these is probably the space elevator, a concept that envisions a tether extending from the Earth’s surface to the halfway point between Earth and the Moon.

In 2003, a NASA grant culminated in a report detailing a possible design. Researchers concluded there is a chance that it could be realized within a 30-50 year time frame. It would take 15 years to build with a price tag totaling $10 billion.

WHY DO WE WANT ONE?

There are some advantages to using a space elevator instead of rockets, with cost being the biggest. At the moment, it costs about $22,000 per kilo ($10,000 a pound) to get anything from Earth's surface into geostationary Earth orbit (GEO).

Some predictions on space elevators put the price of transporting an entire shuttle payload (around 12,000 kg) at just $17,700—a 95% reduction. Satellites, for example, can simply be released at the required altitude, leaving only some maneuvering requiring small thrusters, and past GEO it becomes possible to send probes out at escape velocity or more. Furthermore, in the future a space elevator would also provide a way for us to transport off-planet mined resources, such as iridium and helium-3, back down to Earth.

WHAT DO WE NEED?

Let’s start with the most glaring issue: sheer, vulgar tensile strength. We need a cable that can hold up its own weight - all 35,000 km (22,000 miles) of it. Because gravity decreases the farther away from Earth you are, the tensile strength for the cable needs to be able to support roughly 5000  km (3000 miles) of itself.

The race is on for carbon nanotubes, A.K.A. Buckytubes, with a projected breaking length in excess of 4700 km! This would suffice in theory, provided that the elevator tether is tapered according to the stress it endures at different altitudes: thick at GEO and thin at the Earth’s surface.

Then we need a vehicle that can make its way up, but this is not as simple as just a box pulled by cables. The likely method will be some sort of crawler device that uses rollers on either side of the tether to pull itself up. However, the energy required would put a serious dent in the payload capacity.

Radiation shielding is also a must for any passengers and sensitive goods, due in part to the Van Allen radiation belts - regions where charged particles are held by the Earth’s magnetic field. The elevator crawlers will likely be moving at low enough speeds to make exposure a real risk - even at the predicted 300 km/h, a trip to GEO will still take five days. Having to line a crawler with lead will, again, limit the payload. Finally an effective launch platform at, or very close to the equator will also be required.

At the surface there are two possibilities, either the tether comes all the way down, or a tower is built 20 - 50 km (12.5 - 31 mi) high, from which the crawlers would be launched - possibly using magnetic levitation for the initial acceleration. More importantly, the tower would be meant as a less-floppy base for the tether making it far less susceptible to weather. How we might go about building a tower that tall is perhaps for another article.

Next there has to be a counterweight or the whole structure will literally be pulled out of the sky. One idea is that a small asteroid will be captured and connected at a distance, depending on the mass, above GEO. The other option is to spool out more ribbon far enough out so that its mass can balance the system. That would mean the elevator will reach out over 100,000 km (62,000 mi) more, putting the end at almost halfway to the Moon This will allow for payloads to be literally slung out of Earth orbit entirely. Escape velocity will be reached at around 53,000 km (33,000 mi), which is enough speed to reach Jupiter at 144,000 km (89,000 mi).

How close are we, really; will there be an elevator by 2053? Sadly, it looks very unlikely. The tether could be designed, for better or worse, but the shielded vehicle required might not be the most profitable option at the moment. The estimated cost of $US 10 billion is also likely to be optimistic, and if the project went over-budget, where would the shortfall come from?

There are also satellites to dodge, not to mention over half a million pieces of space junk. Things are crowded up there, especially over the equator, where low earth orbit is easiest to reach. Even the particles left by the exhaust of all those rockets that went up are capable of sandblasting anything that passes through. Even though the tether will be made of the strongest possible material, an impact with a larger piece of debris or a complete satellite, at 6 times the speed of a bullet, will be catastrophic. Then there are meteor showers, such as the Leonids, which could potentially break the tether. Further aggravation will be caused by the atomic oxygen at low Earth orbit, as this is highly reactive and may "eat away" at the tether.

The oscillation of the structure could also pose a potential problem. This is where a vibration in an object has exactly the frequency the object is "tuned to". This vibration will persist and can be amplified under the right conditions. It is an issue with any structure, especially with the solar system’s longest piano string. Sending crawlers up and down it would have to be done at intervals that prevent them from causing the problem. But that is not the only way for it to get started, variations in gravity from the Sun and the moon, and interaction with the Earth’s magnetic field are much harder to mitigate. Tacoma Narrows Bridge anyone?

Is it a good idea? Yes, without a doubt. In practice however there are some big problems to solve, but the potential it has and the wonder it inspires cannot be denied: