Putin Says Russia Is Landing on the Moon This Year

Good luck with that. 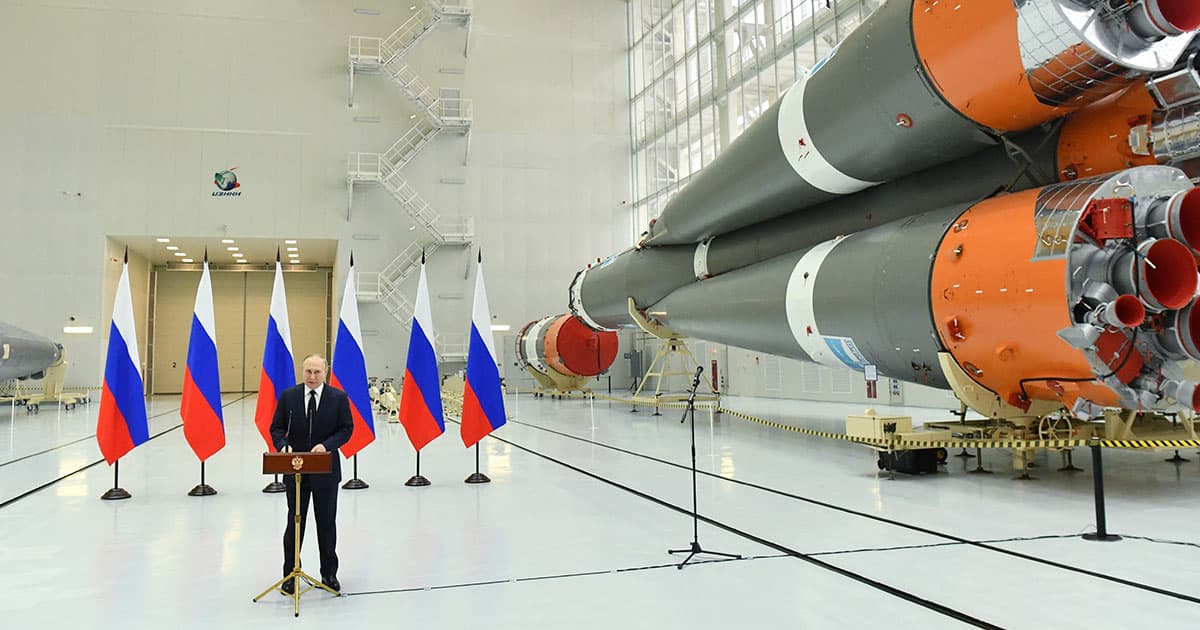 While he's not busy leading what is now being referred to as a "genocide" of the Ukrainian people, Russian president Vladimir Putin seems to be letting his imagination run wild about space exploration.

During a visit of the country's Vostochny Cosmodrome on Tuesday, Putin said that "we need to successfully stand up to the challenges of space exploration," as quoted by The Moscow Times.

According to Putin, the country is hoping to land an uncrewed spacecraft on the Moon some time this year. "We will restore the moon program," he said during the announcement.

But to say that's an ambitious time line would be a huge understatement, especially given the greater geopolitical context and the country's previous attempts.

Making announcements about landing on the Moon, a grand endeavor of nationalist pride, is certainly par for the course for a government actively shielding its citizens from hearing about the atrocities unfolding in Ukraine right now.

"By the third quarter [of this year], the Luna 25 station must be complete," Putin asked Roscosmos CEO Dmitry Rogozin, as quoted by Russian state news agency TASS. "Are we going to make it in time in the third quarter?"

Rogozin, seemingly nonplussed by the suggestion, replied: "It is expected."

But whether Russia will actually manage to land a spacecraft on the Moon within the next eight months is dubious at best. The Luna-25 mission has already faced significant delays for over half a decade, originally being scheduled to launch back in 2016.

The mission is now slated to launch from Vostochny on August 22 — that is, if absolutely everything goes according to plan.

Delays aside, the country's space program Roscosmos is also facing a wall of sanctions from international partners over the country's invasion of Ukraine, with major partners, including NASA and the European Space Agency, rushing to find alternatives to Russian-made rockets for their upcoming missions.

Luna 25 is putatively a stepping stone towards the future goal of establishing a lunar research station with China by the year 2035.

Rogozin and Roscosmos have their work cut out though, and that's putting it lightly. Softly landing on the surface of the Moon is no easy task, as demonstrated by countless attempts since the late 1950s.

Credit where credit is due, the Soviet Union was the first country in the world to reach — or rather impact with — the surface of the Moon back in 1959, with its Luna 2 mission.

But it has been 46 years since Russia last launched a mission to the Moon. Will 2022, a year marked by conflict and a subsequent dissolution of international cooperation, be the year of the country's glorious return to our closest celestial neighbor? That certainly remains to be seen.

Read This Next
Sabers Rattled
Russia Issues Veiled Threat to Shoot Down Pesky SpaceX Satellites
Next Time
NASA Cancels First Launch Attempt of Uber Expensive Moon Rocket
Back to the Moon
NASA: SpaceX Only Has to Prove It Can Land Astronauts on Moon, Not Bring Them Home Again
Sad ROSS
Russia's New Space Station Gets Sadder the More We Hear About It
Moon Vacation
NASA Finds Holes on the Moon Where It's Always a Comfortable Temperature
More on Off World
Boom!
2:24 PM on the byte
The Devastation From NASA's Asteroid Collision Looks Unbelievable
Martian Stragglers
Yesterday on the byte
NASA Says "Foreign Object Debris" Briefly Stuck to Its Mars Helicopter
Mount Olympus
Oct 1 on the byte
NASA Astronaut Is Beefing With Russia Again
READ MORE STORIES ABOUT / Off World
Keep up.
Subscribe to our daily newsletter to keep in touch with the subjects shaping our future.
+Social+Newsletter
TopicsAbout UsContact Us
Copyright ©, Camden Media Inc All Rights Reserved. See our User Agreement, Privacy Policy and Data Use Policy. The material on this site may not be reproduced, distributed, transmitted, cached or otherwise used, except with prior written permission of Futurism. Articles may contain affiliate links which enable us to share in the revenue of any purchases made.
Fonts by Typekit and Monotype.