These signals can generate as much energy as 500 million suns. 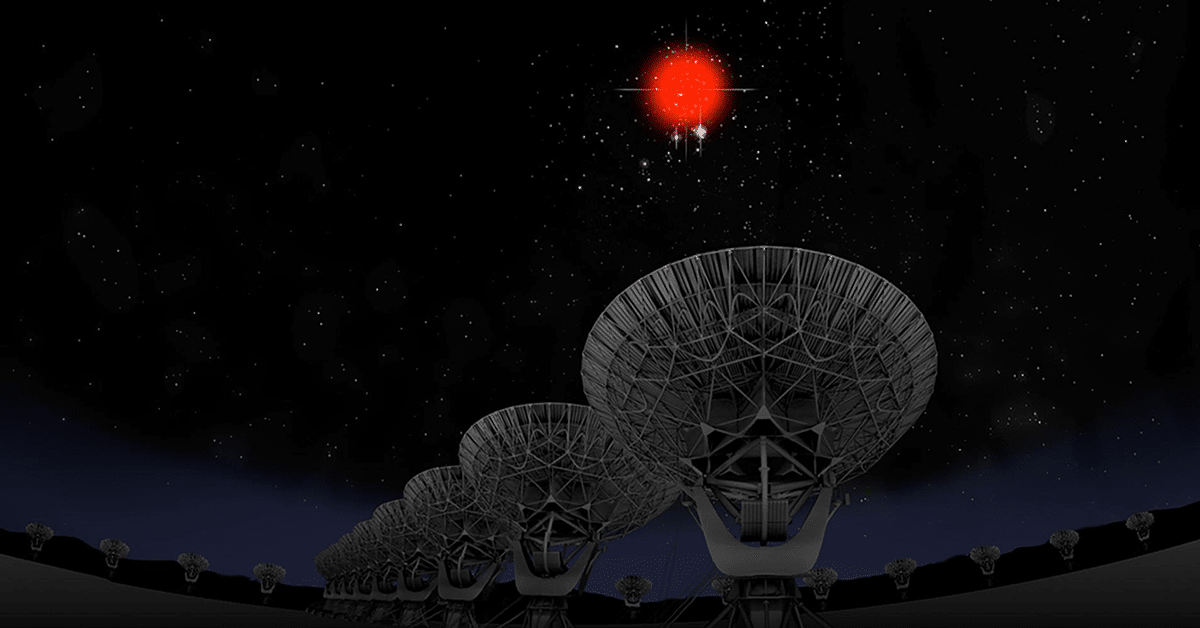 The possibility that someone out there is trying to communicate with us has led to various efforts to analyze sounds produced by our universe. Of these sounds, fast radio bursts (FRBs) are one of the most intriguing types. Discovered only rather recently, FRBs, or "cosmic whistles," are flashes of energy — radio chirps — that exist for just a few milliseconds at a time but can generate as much energy as 500 million suns.

To date, fewer than 20 of these FRBs have been picked up, but scientists didn't quite know what or who caused them — until now.

Using a global network of powerful telescopes, a team of astronomers finally managed to pinpoint one of the sources of these highly unusual signals from space. Their study, which is published in multiple papers in Nature and the Astrophysical Journal Letters, describes how they were able to identify an FRB coming from a dwarf galaxy that's about three billion light-years away.

The enigmatic radio signal in question is called FRB 121102, and it was discovered two years ago by Shami Chatterjee of Cornell University's Department of Astronomy and his colleagues. This particular FRB was interesting because the signals broadcasted seemed to be repeated, which narrowed down the possible sources of FRBs.

"We knew that it has to be some mechanism that is capable of repetition,” Chatterjee explained to National Geographic. “It can't be neutron stars crashing into each other and destroying themselves or something like that.”

The team was able to locate the source of FRB 121102 using very powerful satellites. First, they dedicated all 27 of the 82-foot-wide satellite dishes at New Mexico's Very Large Array radio observatory to the task. After a period of six months that included 83 hours-worth of observations, the team managed to capture nine images of FRB 121102. Next, they used the powerful Gemini optical telescope to narrow the source of FRB 121102 to a dwarf galaxy about three billion light-years away from Earth.

To confirm and verify these findings, the team took another look at FRB 121102 using a network of powerful European telescopes. It was then that, according to Chatterjee, FRB 121102 "went into hyperdrive," emitting bursts that repeated once every hour on average.

At that point, the team was able to pinpoint the source of FRB 121102 as the very center of the dwarf galaxy, which happened to be occupied by a supermassive black hole. This means that the fast radio bursts could be caused by the black hole itself, or they could be the result of something else near it, like the gaseous remnants of a supernova in the black hole or a neutron star orbiting it.

One of the most interesting things about FRBs is that we have yet to detect any within our own galaxy. Because they only seem to emanate from places many, many light-years away, Chatterjee believes that understanding the phenomenon of FRBs can help us learn more about the universe's past.

Alternatively, we could be receiving evidence of local FRBs and dismissing them as interference caused by things like cell phones, satellites, and radar, which would mean the phenomenon is ongoing. Also, pinpointing a black hole as the source of FRB 121102 doesn't mean that all fast radio bursts are caused by the same conditions. There could be different kinds that we just haven't honed in on yet.

In any case, further study is required, and as more information comes to light, we'll gain a deeper understanding of the universe in which we live.

Read This Next
BUUURP
Astronomers Pinpoint Source of Mysterious Radio Burst Signal
Galactic Dance Party
Astronomers Record Signal Coming From Deep Space Every 157 Days
Futurism
Scientists Detect Powerful Radio Burst Coming From Our Own Galaxy
Futurism
Fast Radio Bursts Have a Unique Property That Can Help Us Determine Their Source
Futurism
Researchers Have Found 15 New "Cosmic Whistles" Unlike Any We've Detected Before
More on Hard Science
Having a Blast
Jan 18 on the byte
New Study Shows Where You Should Hide to Survive a Nuclear Attack
Offworld Amino
Jan 15 on the byte
Scientists Find Building Blocks of Life in Meteor That Smashed Into Family's Driveway
Triple Threat
Jan 4 on the byte
Traveling Faster Than Light Would Mean Experiencing Multiple Timelines Simultaneously
READ MORE STORIES ABOUT / Hard Science
Keep up.
Subscribe to our daily newsletter to keep in touch with the subjects shaping our future.
+Social+Newsletter
TopicsAbout UsContact Us
Copyright ©, Camden Media Inc All Rights Reserved. See our User Agreement, Privacy Policy and Data Use Policy. The material on this site may not be reproduced, distributed, transmitted, cached or otherwise used, except with prior written permission of Futurism. Articles may contain affiliate links which enable us to share in the revenue of any purchases made.
Fonts by Typekit and Monotype.