“This site can tell us about the type of environment where life may have begun on Earth."

Experts have predicted for years that, at some point in the near future, we will make the first human discovery of alien life — and that life will be on Mars. At the same time, researchers have worked tirelessly in trying to pinpoint the origins of life on Earth.

Recently, scientists have discovered evidence that could be key to understanding the beginnings of life — namely, indications suggesting ancient hydrothermal deposits on the “sea-floor” of Mars. This hidden site in the Eridania region of Mars might not hold definitive answers about Martians, but could provide clues to how life evolved on our planet. 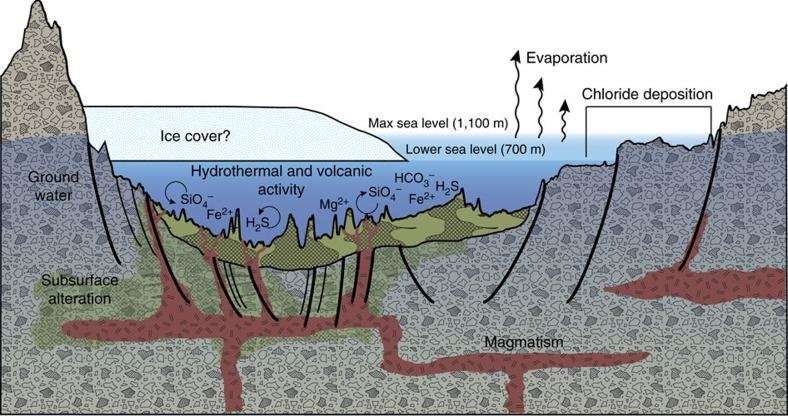 An illustration of deposits in the Eridania basin. Image Credit: NASA

NASA’s Mars Reconnaissance Orbiter (MRO) observed these deposits in a basin within a southern region on Mars as MRO’s Compact Reconnaissance Spectrometer for Mars identified minerals in the deposits. Recently, an international report published in the journal Nature Communications analyzed the MRO’s observations and concluded that the deposits were most likely formed by hot water, heated by a part of Martian crust that was volcanically active a long, long time ago.

No life (microbial or otherwise) has been identified in the samples, but Paul Niles of NASA’s Johnson Space Center in Houston explained that, “Even if we never find evidence that there’s been life on Mars, this site can tell us about the type of environment where life may have begun on Earth,” he said in a press release from Jet Propulsion Laboratory. “Volcanic activity combined with standing water provided conditions that were likely similar to conditions that existed on Earth at about the same time — when early life was evolving here.”

These sea-floor deposits are roughly 3.8 billion years old, and around that same time, hydrothermal conditions on the sea-floor of Earth were potentially gearing up for life to begin. Now, because Earth’s crust is still so active, there aren’t clear remnants of this origin period. But this ancient sea-floor on Mars seems to be an excellent candidate for partially simulating Earth’s origin conditions.

If this discovery does provide understanding into the origins of life on Earth, we could potentially also gain insight into where to look for alien life, whether it be in our solar system or elsewhere. This is an astrobiological feat of epic proportions.

The report which analyzed this discovery states that “Ancient, deep-water hydrothermal deposits in Eridania basin represent a new category of astrobiological target on Mars,” and “Eridania seafloor deposits are not only of interest for Mars exploration, they represent a window into early Earth.”

New Research: Mars May Have Once Had Rings