New Insight Into the Purpose of Stonehenge 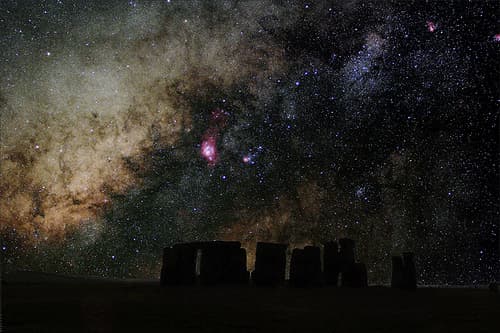 Despite the lack of technology and an intimate understanding of the laws of physics, many ancient civilizations created various structures that are impressively more sophisticated than anything we can make in the modern world (take the Gaza pyramids, for example). Yet thousands of years later, we still don't know exactly what these civilizations knew about the stars and how they knew it. We can only make educated guesses, but we peel back the layers of guesses and move closer to the truth when new discoveries are made. In the case of Stonehenge— arguably the most famous monument created during ancient times — it looks like science has finally cut across a centuries-in-the-making impasse, but what does the truth, or at least the newest version of it, reveal about the purpose of this incredibly old structure?

Progress first came almost five years ago,  when a team of researchers from the Ludwig Boltzmann Institute for Archaeological Prospection and Virtual Archaeology in Austria formed a coalition, called the Stonehenge Hidden Landscapes Project, with the intent to perform the very first detailed underground survey of the region surrounding Stonehenge. Overall, this survey included four square miles of Wiltshire, England's terrain. Now, the team has revealed the rediscovery of an additional 15 late Neolithic monuments that were previously unknown to science, each henge, barrow, pit and ditch giving us a clearer picture of the builders' intent.

The discovery was made using both magnetic sensors and ground-penetrating radars. In the summer of 09, this technique yielded the evidence they were looking for, when sensors indicated that certain areas still bear evidence of ancient construction sites, which show up as variations in Earth's magnetic field.

"This is among the most important landscapes, and probably the most studied landscape, in the world," said archaeologist Vince Gaffney. "And the area has been absolutely transformed by this survey. It won’t be the same again."

Prior to this latest revelation, the most important discovery was made was back in the 1600's, when diggers uncovered various animal skulls and spent coals buried within the center of Stonehenge. Back then, we didn't have the technological capacity to truly understand these objects, let alone determine whether or not they were relevant to Stonehenge. It wasn't until 60 years ago that radiocarbon dating finally clued us in. Using the method, scientists were able to deduce that one of those charred pieces of charcoal originated way back in 2,600 B.C., meaning Stonehenge was likely erected in a similar time frame. If so, these finds are similarly connected to the 2006 discovery of tools, huts and animal bones excavated nearby in a small village called Durrington Walls. When they were found, it seemed as if we had finally found the home of the people responsible for its construction.

Gaffney, a noted archaeologist in his own right, suggests that this newly unearthed evidence indicates that Stonehenge lies within the heart of what use to be a busy village more than 4,000 years ago, rather than Stonehenge representing some kind of isolated, untouched shrine. However, he doesn't discount the possibility that the site also served as a cemetery and a place of worship.

“There was sort of this idea that Stonehenge sat in the middle and around it was effectively an area where people were probably excluded,” Gaffney continued in an interview with the Smithsonian magazine, “a ring of the dead around a special area—to which few people might ever have been admitted....Perhaps there were priests, big men, whatever they were, inside Stonehenge having processions up the Avenue, doing...something extremely mysterious. Of course that sort of analysis depends on not knowing what’s actually in the area around Stonehenge itself. It was terra incognita, really.”

The scientists working with the Stonehenge Hidden Landscapes Project went on to develop a new map that now includes the new monuments, along with a long strip of land (or a  ditch barrier) that spans two miles (3 km) from east to west, called the Curcus. It might even be a few hundred years older than Stonehenge itself, but its purpose remains unclear. However, the Cursus Barrows is home to what appears to be a mass grave/Some of those bones and  cremated remains have been analyzed, showing that people traveled from distant reaches of the continent to visit the monument.

As Gaffney put it, it's "a bloody great barrier to the north of Stonehenge." Its location in respect to the main structure of Stonehenge might suggest that it was designed to align with the Sun's movements in the sky (at least on important dates, like the spring and autumn equinox); an idea that now has even more backing in light of the new discoveries.

The team also noted several gaps within this ditch, with the largest one located on the far northern side. Perhaps this region once served as the entrance to the Cursus, a place people shuffled in and out of, back when the times were still simple.

Taking this concept a step further, Gaffney suggests the gaps existed as "channels though the landscape" — and that people traveled through the channels to engage in rituals, With the large pits that lead away from the entrance — one on the eastern end and one on the opposite end —  serving as "markers of some kind."

Here's where it gets very interesting. They found that the path to the first pit lies perfectly along the path the sun takes on the morning of the summer solstice, while the second pit has its own astronomical significance.  "Two pits, marking the midsummer sunrise and the midsummer solstice, set within a monument that’s meant to be something to do with the passage of the sun," said Gaffney.

Moreover, it would seem as if, on the longest day of the year (the summer solstice), these pits and the Stonehenge monument come together to form a triangle, marking both sunrise and sunset.

"Increasingly we can see the area around Stonehenge as providing extensive evidence for complex liturgical movement - which we can now understand, largely because we know where things are," Gaffney concluded.

Clearly, we still can't definitively say WHY the ancients built these large monuments, but the latest research is certainly the closest we've ever come to understanding why these monuments were built where they were. Further excavations of the region will surely help paint a clearer picture.

The team plans to formally announce the findings and the new map in early September. Read Gaffney's full interview with the Smithsonian here.