The processed meat brand made some pretty compelling arguments. 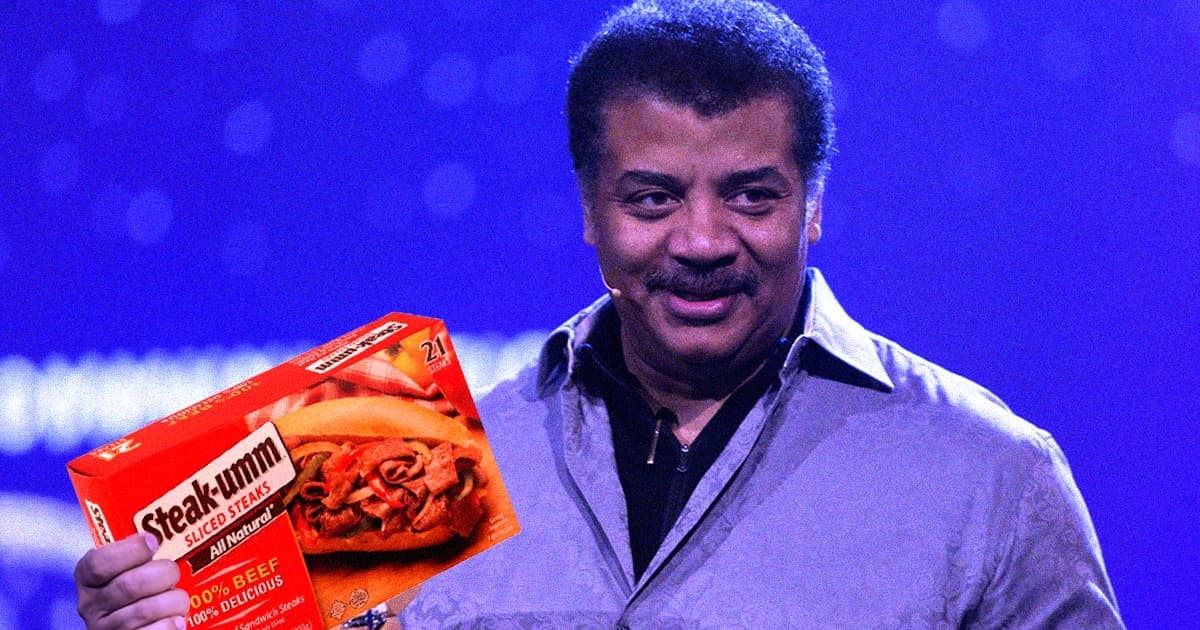 Image by Norwegian University of Science and Technology / Futurism

Twitter can be an unusual place for internet discourse.

It's a bizarre melting pot, where anthropomorphized spacecraft, outspoken political pundits, and billionaire CEOs meet to shout into the void of the world wide web.

Sometimes, things can get a little heated — no matter how mismatched the two bickering parties might be.

Most recently, the social media manager of Steak-umm, a processed meat that some Americans choose to ingest, decided to dunk on science communicator Neil deGrasse Tyson.

Yes, a frozen steak product got into a heated argument with an astronomer. Just another day on Twitter.

"The good thing about Science is that it’s true, whether or not you believe in it," deGrasse Tyson wrote in a recent and characteristically pedantic tweet.

It sounded like an otherwise uncontroversial opinion — but meat product wasn't having any of it.

"Log off bro," Steak-umm fumed in a burst of rage.

Steak-umm — it's unclear if Nathan Allebach, the eccentric social media manager for the meat brand, was behind the tweets — elaborated on its stance, revealing a surprisingly nuanced argument for a beef product.

"The irony of Neil’s tweet is that by framing science itself as 'true' he’s influencing people to be more skeptical of it in a time of unprecedented misinformation," the brand's account tweeted.

"Science is an ever refining process to find truth, not a dogma," the brand continued. "No matter his intent, this message isn’t helpful."

Checkmate, Neil! It appears that Steak-umm is taking issue with Tyson's characteristic all-or-nothing approach to scientific research. The brand argues that by taking science as an unmistakable fact, people's inherent skepticism towards it could further alienate people.

And that's important during the ongoing COVID-19 pandemic, when scientific misinformation is doing more harm than ever before, from misinterpreting the effectiveness of drug treatments to the anti-vaccine movement — topics that Steak-umm has waded into on Twitter before.

Surprisingly, it's not the first time the brand has beefed with deGrasse Tyson, who faced sexual misconduct allegations in 2018.

"Been beefing with Neil for years lol," the brand tweeted, linking to a November 2018 thread in which the brand took a potshot at "some things worth leaving in 2018," with the astronomer listed among other entries such as "negative people" and "Facebook."

Steak-umm seems dead set on taking shots at Tyson, grilling him for posting "ridiculous sound bites like this for clout and he has no respect for epistemology."

And the argument is arguably not without merit.

"Science itself isn't 'true' it's a constantly refining process used to uncover truths based in material reality and that process is still full of misteaks [sic]," the brand philosophized in a follow-up.

A great example of that would be the ever-changing lessons we have learned over the past 14 months about the coronavirus. From initially underestimating the importance of mask wearing to changing the way we understand how the virus can spread on surfaces, our grasp of the virus has evolved and refined considerably over time.

It's a double-edged sword: endorse scientific fact in a dogmatic way and take them as the "truth," and many will start to be wary. Continuously undermine the validity of science, and you'll alienate even more.

So far, deGrasse Tyson has only responded to the onslaught obliquely, writing that "if you have the urge to argue with my previous Tweet, before you do, please spend [four minutes] reading this post," along with a link to a 2016 article by the astronomer.

But if he has more to say, we're here for it. Keep the popcorn coming.

Read This Next
Futurism
Neil deGrasse Tyson on Science Denial, Political Biases, and Personal Beliefs
Futurism
A New Tool Makes Scientific Writing Easier for the Public to Grasp
Futurism
Watch: Neil deGrasse Tyson Has a Critically Important Message for Americans
More on Future Society
Musk Rats
4:54 PM on the byte
Twitter Is Quietly Re-Suspending the Lunatics Elon Musk Let Back On
Going Wireless
Yesterday on futurism
Hackers Took Over a Subdomain of Wired.com for Several Months and Replaced It With Sleazy Online Casino Content
Spreadsheet Guy
Tuesday on the byte
Sam Bankman-Fried Posts Excel Docs That He Says Shows Nothing Was His Fault
READ MORE STORIES ABOUT / Future Society
Keep up.
Subscribe to our daily newsletter to keep in touch with the subjects shaping our future.
+Social+Newsletter
TopicsAbout UsContact Us
Copyright ©, Camden Media Inc All Rights Reserved. See our User Agreement, Privacy Policy and Data Use Policy. The material on this site may not be reproduced, distributed, transmitted, cached or otherwise used, except with prior written permission of Futurism. Articles may contain affiliate links which enable us to share in the revenue of any purchases made.
Fonts by Typekit and Monotype.