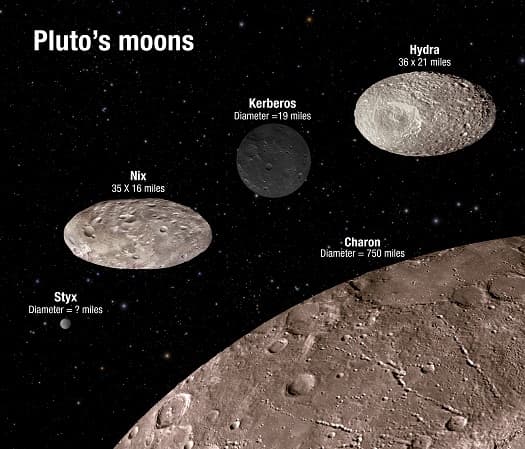 If you were to take up residence on any one of Pluto's moons, you would have a difficult time adjusting to your new daylight hours, among other variables. Some days, the sun would rise in the east and set in the north. Other days, it could be the opposite, or you might not even see it rise at all.

The reason for the extreme variation is that two of Pluto's moons, Nix and Hydra, "wobble unpredictably." John Grunsfeld, associate administrator of NASA's Science Mission Directorate, says the moons are in the midst of a "cosmic dance with a chaotic rhythm." At a media teleconference earlier this week, NASA unveiled this, along with other "surprising observations" of Pluto's five known moons, which came to light after two researched thoroughly poured through images taken by the Hubble Space Telescope.

The Pluto system consists of Pluto and its largest moon, Charon, at the center. Orbiting the binary planet are Nix, Hydea, Kereros, and Styx. The researchers—Mark Showlater (of the SETI Institute), and Doug Hamilton (from the University of Maryland)—discovered that Pluto's moons wobble erratically because they are embedded in a gravitational field that shifts constantly, which appears to stem from interactions between Pluto and its largest moon, Charon (collectively, they are so strange, astronomers believe Charon may not be Pluto's moon. Rather, they may comprise a double planet system).

Nix and Hydra exhibit chaotic rather than synchronous rotation. This goes back to the idea of the sun not rising consistently, the moons don't always face Pluto-Charon the same way. This makes it very difficult to predict their rotations. For comparison, our moon is a synchronous rotator.

“Like good children, our moon and most others keep one face focused attentively on their parent planet,’ said Hamilton. “What we’ve learned is that Pluto’s moons are more like ornery teenagers who refuse to follow the rules.” Showalter speculates that Styx and Kerberos may be following this "ornery teenager" pattern as well.

The moons' shape also have an impact on their movements. Rather than being spherical, it is believed that they are shaped more like a rugby ball, resulting in even more chaos. This chaos, says Hamilton, "may be a common trait of binary systems;" "it might even have consequences for life on planets if found in such systems.”

The photos taken by the Hubble Space Telescope also revealed that the moon Kerberos is "as dark as a charcoal briquette," reflecting only about 4% of the light it receives. In contest, Nix, Hydra, and Charon reflect about 40% of light, and are even described as "dirty snowballs" by Showalter.

However, scientists were surprised by how much brightness and size estimates for the moons varied. Brightness is one of the variables that helps determine the relative size of the moons during observation. Now, "there are a lot of uncertainties about the properties of Nix and Hydra that have gone away now," according to Showalter.

Astronomers had assumed that the moons would have similar compositions. They based this on the fact that Pluto's moons likely took shape using the scattered debris left behind by an impact between Pluto and Charon. Although he admits the idea is just speculation, Showalter wonders whether Charon was once a very dark body. Perhaps, Kerberos could be a "relatively pristine" piece of this original impactor.

The images from the Hubble Space Telescope offer further insight into the complexity of the Pluto-Charon binary system. But, this is just the beginning. As Showalter said, "our work with the Hubble telescope just gives us a foretaste of what's in store." As New Horizons travels closer to the system (it's expected to arrive in July), new discoveries are a foregone conclusion.