Tour of the Dwarf-Planets: Pluto 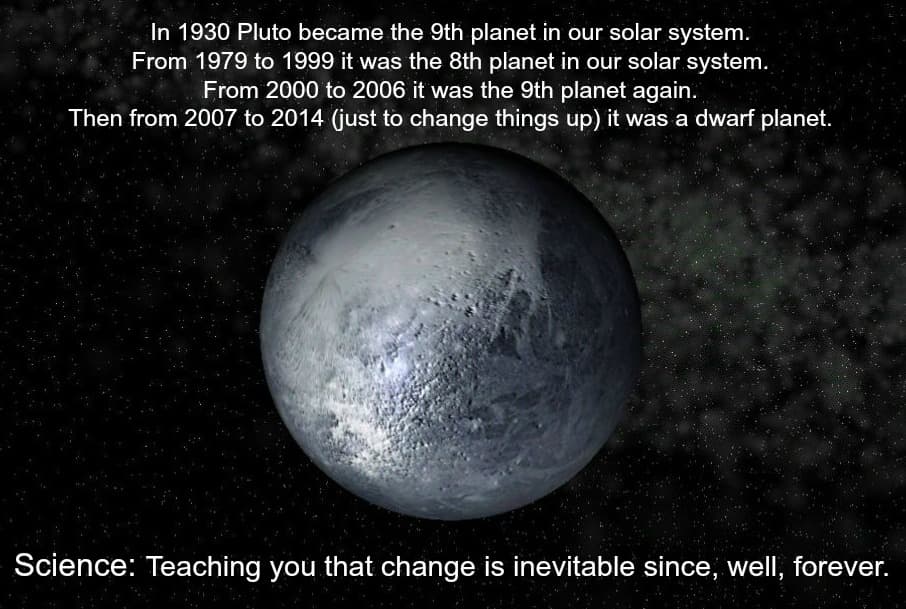 I think we’ll all agree that Pluto is a rather unique object...and has been since the moment of its discovery.

For starters, unlike the other major planets in our solar system, Pluto has an orbit that is highly elliptical. Each revolution, Pluto swings in towards the Sun. As it hurtles closer to our star, the dwarf planet heats up and develops a thin atmosphere. Following this, it careens out towards the farthest reaches of the solar system...freezing...becoming dormant...and nearly doubling its orbital distance in the process.

On top of its extremely eccentric orbit, Pluto’s flight path is inclined by more than 17°, so Pluto appears to sweep in an angle across the plane upon which the other planets revolve. And the strangeness doesn’t end here.

Pluto is hardly this stable.

But of course, things changed.

In 2006 Pluto was reclassified as a dwarf planet, to the dismay of most Earthlings. As a result of this historic decision, it seems that (at least for the time being) Pluto’s classification has stabilized. It is a dwarf planet. It was a dwarf planet yesterday. It will be a dwarf planet tomorrow and…you get the picture. But of course, just because this odd little object has a stable classification, it doesn’t mean that it’s no longer, well...odd.

As it travels around the sun, the Earth follows a path that is a little over 584 *million* miles long (939 million km). Because it is so far away, Pluto’s orbital journey is a bit longer. In fact, it is a lot longer: totaling over 22.6 *billion* miles (36.5 billion km). Because its orbit is so large, it takes Pluto nearly 247 years to complete one revolution around the Sun (90,553 Earth days). As such, between the time it was discovered and the time that it was reclassified as a dwarf planet, Pluto didn’t even complete one orbit around the sun. And it still has more than 160 years to go. In fact, we won’t observe a complete orbit until 2178.

Because it is so far out in the solar system, the temperature on Pluto hovers around a chilly -373F (-272C). Not too surprising, seeing as it is in a frozen wasteland some 3.6 billion miles (5.9 billion km) from our life giving star. In fact, if you were standing on Pluto, the Sun would be 1/39th as big as it is on Earth (or 0.026 times as big). As a result, it wouldn’t look special—It would appear to be just another star. Consequently, Pluto’s extreme distance from the Sun would make it extremely difficult to discern the true nature of our solar system, had humanity evolved on this dwarf planet. Of course, it would have been terribly unfortunate if humanity evolved here, because it is an awfully small place. With an equatorial circumference of 4,493 miles (7,231 km), Pluto’s circumference is barely longer than the distance between New York and Western Europe.

Since it is so distant, Pluto is a member of a group of objects called the “Kuiper Belt.” This realm of space is populated with thousands of miniature icy worlds. It is believed to house hundreds of thousands of icy bodies larger than 100 km (62 miles) across, and an estimated trillion or more comets.

Since Pluto is so far from Earth, little is known about the planet’s size or surface conditions. However, in 2006 NASA dispatched The New Horizons spacecraft, which is now more than halfway between Earth and Pluto, on approach for the icy dwarf planet and its moons in (scheduled arrival is July 2015). After near 10 years and more than 3 billion miles (4.8 billion km), New Horizons will shed light on this dark body…assuming, of course, that New Horizons makes it to Pluto.

Unfortunately, the journey is rather precarious. The spacecraft will be traveling nearly 30,000 miles per hour (over 48,000 kmh) when it hurtles past the dwarf planet. At this speed, New Horizons could be destroyed in a collision with even a BB-shot-size piece of orbital debris.