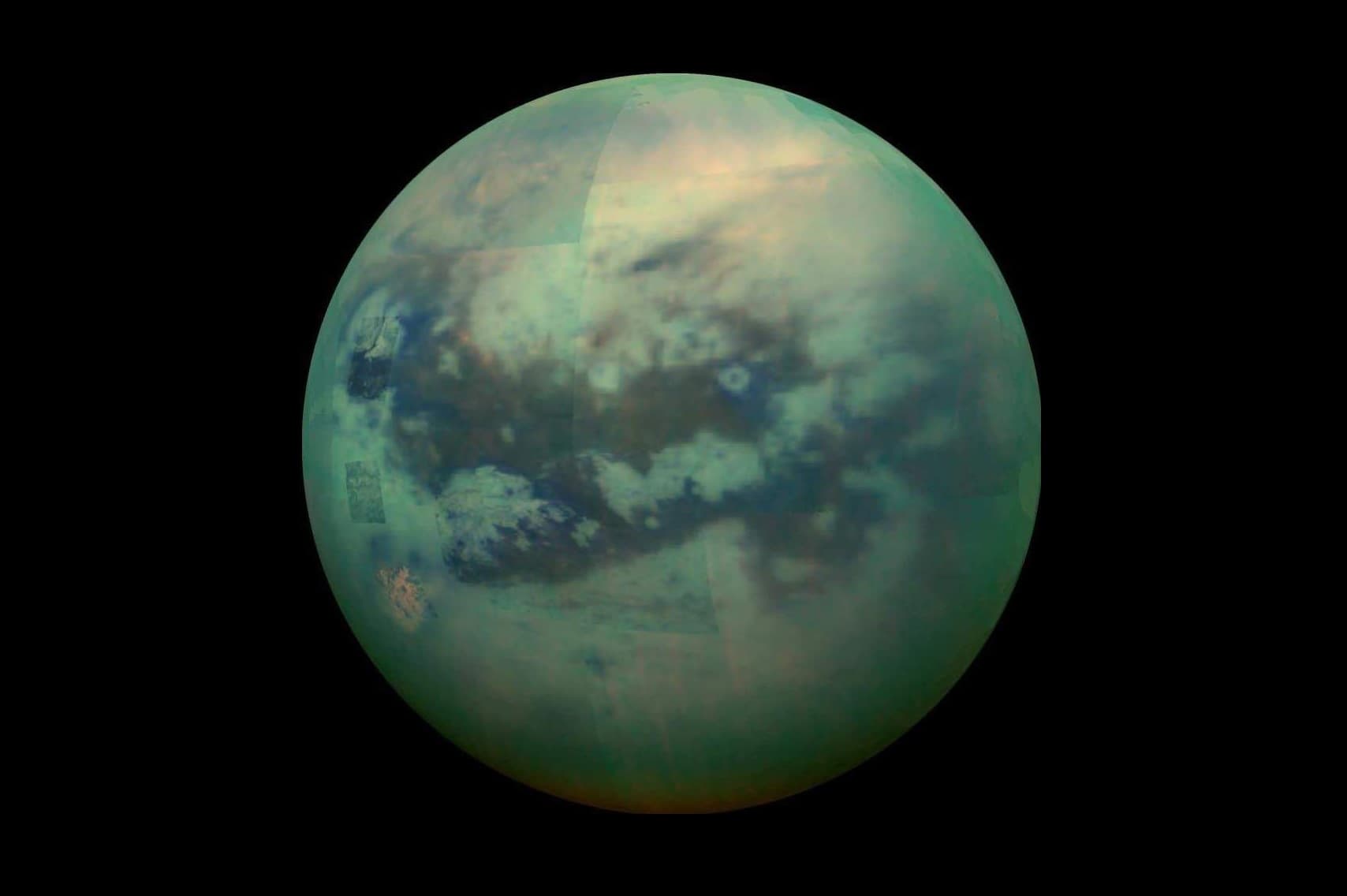 NASA has released a composite image of Titan, the largest moon of Saturn, constructed from photos taken by the Cassini spacecraft. The image shows some details of the moon's surface instead of its hazy atmosphere (which is what we typically see). The visible terrains are mostly on the Saturn-facing hemisphere of Titan, including the dark, dune-filled regions of Fensal to the north and Aztlan to the south, which together form the shape of a letter H lying on its side.

Titan is tidally locked, meaning the same side always faces towards Saturn, just like the Moon does with Earth.

The November 13 Cassini flyby was as close as 10,000 kilometers to the "rich and complex" world of Titan. The altitude was considerably higher than normal flybys at 1,200 kilometres, but all the same it enabled the spacecraft to capture moderate-resolution views over wide areas, with a resolution of a few kilometres per pixel.

The individual pictures were taken from different altitudes hence the composite image shows different levels of detail. Images were taken at near-infrared wavelengths which penetrated the thick orange haze of Titan's atmosphere.

The colors in the composite image are false and represent the wavelengths of light recorded by Cassini's visual and infrared mapping spectrometer (VIMS) instrument. They spread out from blue at 1.3 microns, through green at 2.0 microns, to red at 5.0 microns, while visible light is centered around 0.5 microns.

NASA says images captured by the Cassini orbiter show "remarkably Earth-like processes" shaping the surface of Titan. It is covered with tall dunes, river channels, and great lakes. It is also the only moon in the solar system to have a thick atmosphere, kind of like Earth's. There are only a few meteorite craters on Titan, meaning that its surface must be relatively young, being reshaped by wind, liquid and tectonic movement—also like processes on Earth.

However, because the surface of Titan is at a freezing minus 179 degrees Celsius, the sand is composed of dark hydrocarbon grains while its solid surfaces are water ice as hard as rock. And before you plan on heading there because it's just so "Earth-like," you should probably know that the liquid present on Titan's surface and in its atmosphere is methane - a gaseous substance on Earth.

Yes, thanks to the cold, the rain on Titan is methane.

Also, though 95 percent of Titan's atmosphere is primarily nitrogen, most of the remainder is methane, not oxygen. Methane is a compound of carbon and hydrogen which, when broken down by cosmic radiation in the upper atmosphere, contributes to the orange haze that obscures Titan's surface from visible light. The carbon, hydrogen, and nitrogen in the moon's atmosphere result in a range of organic molecules, something akin to Earth's early atmosphere before life developed.

Read This Next
Glow On
Scientists Unlock Decades-Old Mystery Behind Glow on Saturn
The Other White Meat
Space Colonists Will Likely Resort to Cannibalism, Scientist Says
Under the Sea
Scientists Intrigued by Possible Signs of Life on Saturn's Moon
Moon Beam
NASA Engineer: Humans Should Consider Settling Saturn's Moon Titan
Futurism
Here's What Alien Life on Saturn's Moon May Look Like
More on Off World
Grrrrrrrr
4:06 PM on the byte
Internet Erupts as NASA Spots Cartoon Bear on Surface of Mars
Gl1tc4
2:44 PM on the byte
NASA Says Another James Webb Instrument Has Suffered a Glitch
comet Spotting
2:06 PM on the byte
Behold! Dazzling Green Comet Approaches
READ MORE STORIES ABOUT / Off World
Keep up.
Subscribe to our daily newsletter to keep in touch with the subjects shaping our future.
+Social+Newsletter
TopicsAbout UsContact Us
Copyright ©, Camden Media Inc All Rights Reserved. See our User Agreement, Privacy Policy and Data Use Policy. The material on this site may not be reproduced, distributed, transmitted, cached or otherwise used, except with prior written permission of Futurism. Articles may contain affiliate links which enable us to share in the revenue of any purchases made.
Fonts by Typekit and Monotype.