"The shadow moves. It’s flapping like the wings of a bird!" 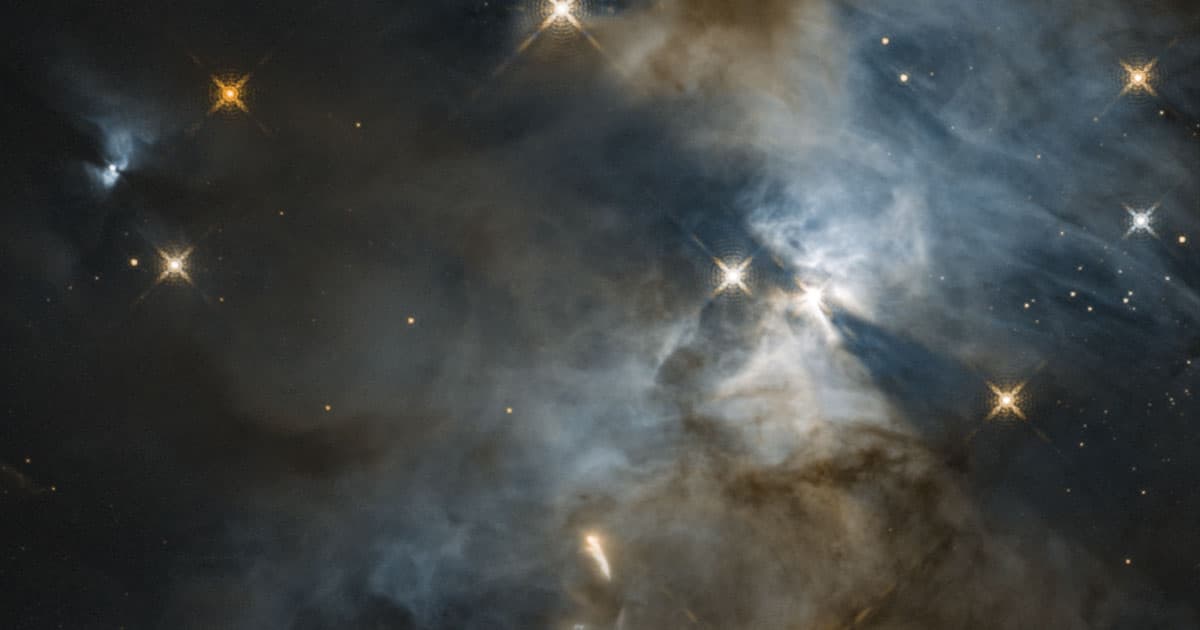 "The shadow moves. It’s flapping like the wings of a bird!" Klaus Pontoppidan, an astronomer at the Space Telescope Science Institute (STScI) in Baltimore, and lead author of a paper about the discovery in the Astrophysical Journal, said in a statement.

The star, called HBC 672 and located some 1,400 light years away in the Serpent nebula, is just one or two million years old — practically a baby in cosmic terms. It casts the shadow due to a warped and flared disk surrounding it.

"You have a star that is surrounded by a disk, and the disk is not like Saturn’s rings — it’s not flat," explained Pontoppidan. "It’s puffed up. And so that means that if the light from the star goes straight up, it can continue straight up — it’s not blocked by anything."

But if the ring does block it, the light "doesn't get out and it casts a shadow," he added.

The disk surrounding the young star is likely made out of gas, dust and rock and has two peaks on opposite ends, like a horse saddle. Light cast through this ring ends up looking like a pair of flapping wings.

The disk itself is too small and far away for Hubble to observe it directly, so the team had to resort to examining its massive shadow.

The astronomers suspect a planet in the star's orbit could be warping and shifting the shape of the ring, and therefore the movement of its shadow. Such a planet would take an estimated 180 Earth-days to circle its parent star.

The star may be extremely young, but its ring of rock and dust is enormous. The size of just the shadow alone would be hundreds of times the size our entire solar system, according to NASA. Light would take more than a month to travel that distance.

By taking additional pictures using filters, the team was able to create a gorgeous, colored image of the star and its "bat shadow."

Read This Next
Into Darkness
Inside NASA's Bold Proposal to Probe the Mysteries of Dark Matter
Martian Ammonia
NASA Rover Detects Organic Molecules on the Surface of Mars
Myanus, Hisanus, Heranus...
Here's What Uranus Scientists Think About Your Disgusting Jokes
Joseph Strikes Again
Experts Shred Paper Claiming to Identify Mushrooms on Mars
Mars Shrooms
Extremely Dubious Research Claims to Spot Fungus Growing on Mars
More on Hard Science
Past Particle
Yesterday on the byte
Large Hadron Collider Discovers Strange New Particles
Moved to Tears
Jun 30 on the byte
Scientists Say New James Webb Images Are So Powerful That It Was Emotional Just Looking at Them
Good God
Jun 28 on the byte
Huge Cloud of Toxic Yellow Gas Kills 13
READ MORE STORIES ABOUT / Hard Science
Keep up.
Subscribe to our daily newsletter to keep in touch with the subjects shaping our future.
+Social+Newsletter
TopicsAbout UsContact Us
Copyright ©, Camden Media Inc All Rights Reserved. See our User Agreement, Privacy Policy and Data Use Policy. The material on this site may not be reproduced, distributed, transmitted, cached or otherwise used, except with prior written permission of Futurism. Fonts by Typekit and Monotype.