You've never seen stars like this before — with one foot in the grave. 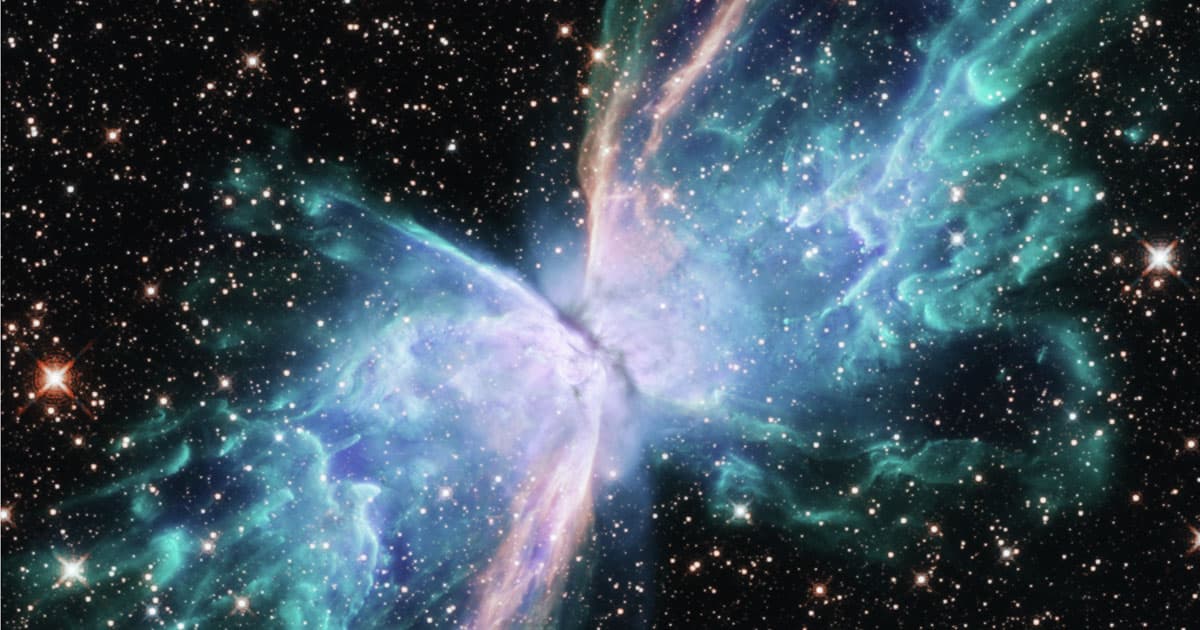 A new study sheds reveals the spectacular final stages of stars nearing the end of their lives.

Using fresh observations of two distant nebulas collected in multi-wavelength form by NASA's Hubble space telescope, a team of astronomers made several new discoveries about what stars go through as they die.

"These new multi-wavelength Hubble observations provide the most comprehensive view to date of both of these spectacular nebulas," Joel Kastner of Rochester Institute of Technology, Rochester, New York, lead author of the new paper published in the journal Galaxies earlier this week, said in a statement.

"As I was downloading the resulting images, I felt like a kid in a candy store," he added.

Kastner's team found that the nebulas split apart over a surprisingly short period of time. They also suspect that each nebula core once contained two stars in a close dance with each other, a process that creates vast dust clouds as seen in the Hubble's images.

As they spin around each other, one star loses mass which is absorbed by the other. Over time, researchers suggest that this could lead to the lower-mass star being eaten up by its energetic twin, a process which could eventually lead to a butterfly-like pattern.

"The suspected companion stars in NGC 6302 and NGC 7027 haven't been directly detected because they are next to, or perhaps have already been swallowed by, larger red giant stars, a type of star that is hundreds to thousands of times brighter than the Sun," Bruce Balick, professor at the University of Washington in Seattle and co-author of the new research, said in the statement.

"The hypothesis of merging stars seems the best and simplest explanation for the features seen in the most active and symmetric planetary nebulas," Balick added. "It's a powerful unifying concept, so far without rival."

In the case of the Butterfly Nebula, the researchers suspect that the star spun "like a spinning top that's about to fall," according to Kastner, throwing out gas in erratic patterns. The Jewel Nebula, in stark contrast, showed that something "recently went haywire at the very center, producing a new cloverleaf pattern, with bullets of material shooting out in specific directions."

More on Hubble: These Rare Exoplanets Have the “Density of Cotton Candy”

Read This Next
Into Darkness
Inside NASA's Bold Proposal to Probe the Mysteries of Dark Matter
Martian Ammonia
NASA Rover Detects Organic Molecules on the Surface of Mars
Myanus, Hisanus, Heranus...
Here's What Uranus Scientists Think About Your Disgusting Jokes
Joseph Strikes Again
Experts Shred Paper Claiming to Identify Mushrooms on Mars
Mars Shrooms
Extremely Dubious Research Claims to Spot Fungus Growing on Mars
More on Hard Science
Warped Tour
Yesterday on futurism
Professor Believes Door to Warp Drive May Lie With Ethylene Glycol
Sky Bursts
Yesterday on the byte
Astronomers Intrigued by 25 Mysterious Repeating Radio Signals From Deep Space
Tractor Beam
Jan 26 on the byte
Scientists Build Working Tractor Beam, Although It's Comically Tiny
READ MORE STORIES ABOUT / Hard Science
Keep up.
Subscribe to our daily newsletter to keep in touch with the subjects shaping our future.
+Social+Newsletter
TopicsAbout UsContact Us
Copyright ©, Camden Media Inc All Rights Reserved. See our User Agreement, Privacy Policy and Data Use Policy. The material on this site may not be reproduced, distributed, transmitted, cached or otherwise used, except with prior written permission of Futurism. Articles may contain affiliate links which enable us to share in the revenue of any purchases made.
Fonts by Typekit and Monotype.