NASA Finds Most Energetic Gamma-Ray Pulsar in the Known Universe 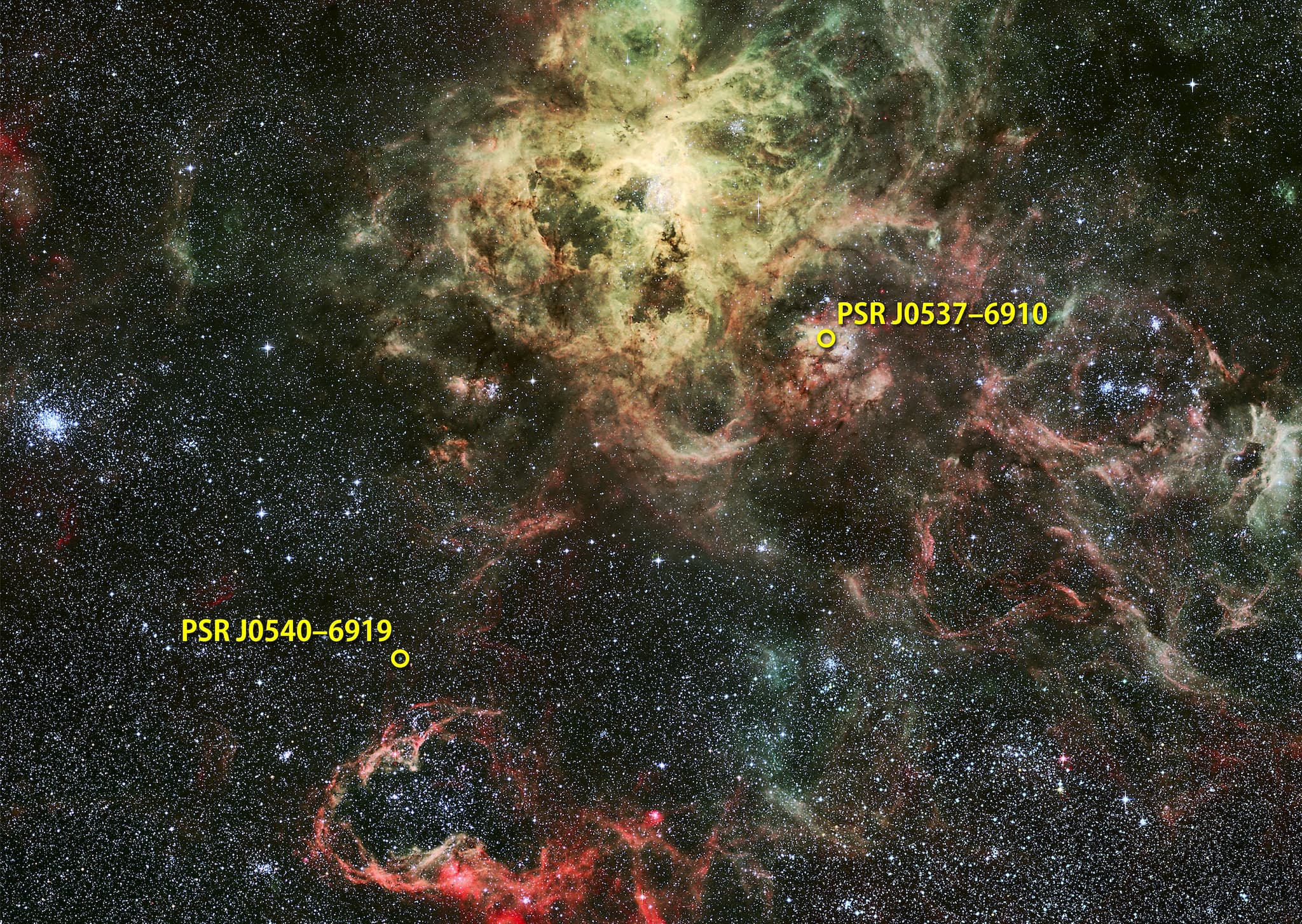 Scientists just discovered the most luminous gamma-ray pulsar in the known universe. This discovery also marks the first time that we located a gamma-ray pulsar in a galaxy other than our own. The researchers were working with data from NASA's Fermi Gamma-ray Space Telescope when they made the discovery and, initially, they were not aware that they were looking at a pulsar. Rather, they thought that they were seeing subatomic particles accelerated by the recent death of a star.

"It's now clear that a single pulsar, PSR J0540-6919, is responsible for roughly half of the gamma-ray brightness we originally thought came from the nebula," said lead scientist Pierrick Martin, an astrophysicist at the National Center for Scientific Research (CNRS) and the Research Institute in Astrophysics and Planetology in Toulouse, France. "That is a genuine surprise."

The pulsar is located in the Tarantula Nebula, which can be found inside the Large Magellanic Cloud, a small galaxy that orbits the Milky Way about 163,000 light-years away.

"The gamma-ray pulses from J0540 have 20 times the intensity of the previous record-holder, the pulsar in the famous Crab Nebula, yet they have roughly similar levels of radio, optical and X-ray emission," said Lucas Guillemot, coauthor of the paper that was recently published in Science. "Accounting for these differences will guide us to a better understanding of the extreme physics at work in young pulsars."

As massive stars approached the end of their lives, they become unstable and explode. This explosion is known as a "supernova," and its one of the most powerful events in the universe.  Surprisingly, a supernova explosion doesn't always kill the star in question; rather, often, a neutron star is born.

Neutron stars have a mass that is equal to half a million Earths; however, it's all crushed down, making the star no larger than your average city. Notably, neutron stars rotate at amazing speeds. Some spin over a thousand times each second. This results in a rapidly spinning magnetic field, which powers beams of radio waves, visible light, X-rays and gamma rays. These beams shoot out from the poles of the star, and if the beam happens to be pointed towards Earth, the neutron star is classified as a pulsar.

In short, pulsars are just neutron stars that have their beams pointed towards Earth.

Read This Next
Hubble Tension
Most Precise Measurements of the Universe Suggest That Something Is Very Wrong
Brands We Love
The New 'What if 100' Book Uses Real Science to Answer Wild Hypothetical Questions
Spider Stars
Astronomers Discover "Spider Stars" That Tear Apart Other Stars
Brands We Love
Watch Thousands of Thought-Provoking Shows and Documentaries on Curiosity Stream
Brands We Love
Go Beyond The Science Headlines With The Fundamentals Of Physics Course
More on Hard Science
Tractor Beam
Jan 26 on the byte
Scientists Build Working Tractor Beam, Although It's Comically Tiny
Having a Blast
Jan 18 on the byte
New Study Shows Where You Should Hide to Survive a Nuclear Attack
Offworld Amino
Jan 15 on the byte
Scientists Find Building Blocks of Life in Meteor That Smashed Into Family's Driveway
READ MORE STORIES ABOUT / Hard Science
Keep up.
Subscribe to our daily newsletter to keep in touch with the subjects shaping our future.
+Social+Newsletter
TopicsAbout UsContact Us
Copyright ©, Camden Media Inc All Rights Reserved. See our User Agreement, Privacy Policy and Data Use Policy. The material on this site may not be reproduced, distributed, transmitted, cached or otherwise used, except with prior written permission of Futurism. Articles may contain affiliate links which enable us to share in the revenue of any purchases made.
Fonts by Typekit and Monotype.