"We're trying to show astronauts can use horticulture to grow their own food on the Moon." 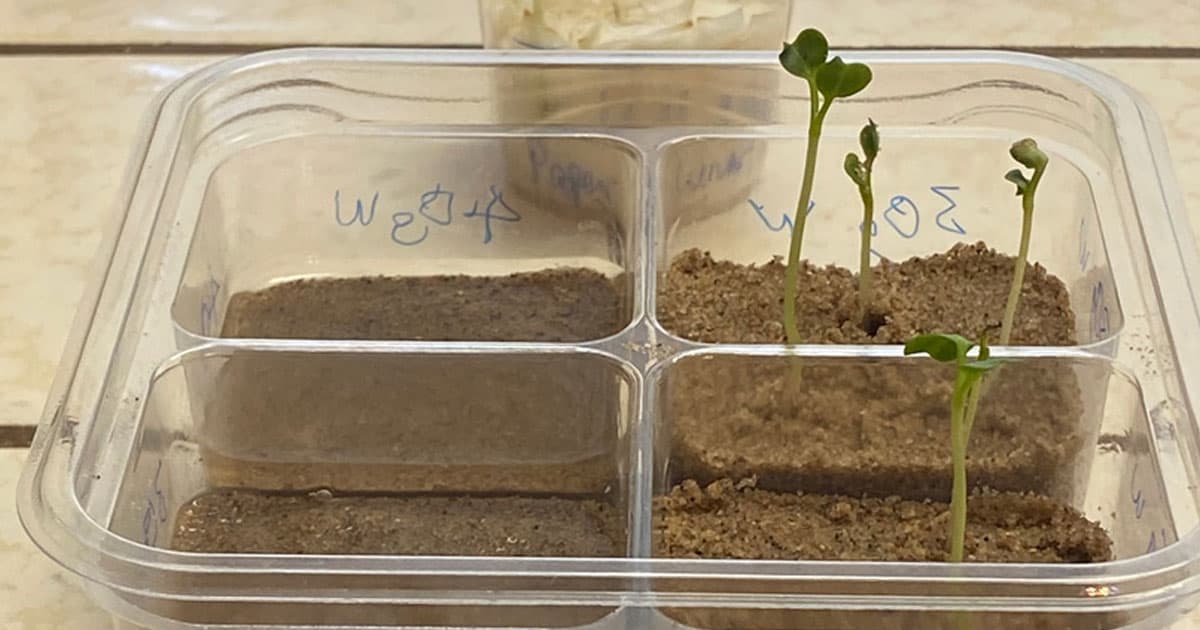 NASA scientist Max Coleman has been trying to figure out if it's possible to grow radishes in lunar soil — in his kitchen.

His goal is to figure out whether astronauts could one day grow their own food on the lunar surface — much like Matt Damon's character in Ridley Scott's 2015 film "The Martian."

Coleman chose radishes because "they have been used before in space, and they germinate very, very fast," according to a NASA Jet Propulsion Lab (JPL) statement.

That's essential, because astronauts will only have 14 Earth days of daylight — half a lunar day — followed by no Sun for another 14 Earth days.

After the coronavirus pandemic forced Coleman and his team of 12 other scientists to put a pause on hands-on tests of special sensors destined for the Moon, Coleman decided to take matters into his own hands. He ordered some radish seeds and desert sand online, and got to work.

His plan was to grow seeds in the desert sand, which is as nutritionally void as lunar regolith. He gave some no additional nutrients and others only small amounts of nutrients.

"We're trying to show astronauts can use horticulture to grow their own food on the Moon," Coleman told JPL.

"We want to do one tiny step in that direction, to show that lunar soil contains stuff which can be extracted from it as nutrients for plants," he added. "This includes getting the right chemical elements to allow plants to make chlorophyll and grow cell walls."

Coleman then raided his kitchen for paper towels, chopsticks, and plastic takeout containers. He even used folded tin foil and a battery tester to measure and track moisture levels.

According to his results, radishes only need tiny amounts of water to germinate. In fact, they grew best when only getting minimal amounts of water. As shown in a series of images taken with his iPhone, the radishes began to sprout and grow over time.

The idea is to keep the amount of stuff astronauts have to take to the Moon to an absolute minimum. "The more you can use what's already there, the more efficient you can be because you don't have to carry that much with you," Coleman explained.

"We can't properly test here on Earth with perfect lunar soil, but we're doing as much here as we can," he added. "Then we want to show that it actually does work on the Moon."

More on growing stuff on the Moon: NASA Wants to Grow a Moon Base Out of Mushrooms

Read This Next
From the Dept. of Things to Buy
Review: The "Out of This World Cook Book" Chronicles the Early Meals of the Space Age
Overloaded
Whiny Space Tourists Say They Were Too Busy on the Space Station
The Moonian
Senior NASA Official Fears Getting "Stuck" on the Moon
Moon Patrol
US Military Announces Plans for Satellite Orbiting the Moon
Space Sick
Space Is Wreaking Havoc on Astronauts' Blood
More on Sci-Fi Visions
What is Happening
Yesterday on the byte
Elon Musk Sets His Twitter Account to Private
From the Dept. of...
Monday on futurism
The Best Humidifiers of 2023
Human v. Giraffe
Jan 24 on the byte
Chaotic Italian Fashion Line Baffles Facial Recognition Software
READ MORE STORIES ABOUT / Sci-Fi Visions
Keep up.
Subscribe to our daily newsletter to keep in touch with the subjects shaping our future.
+Social+Newsletter
TopicsAbout UsContact Us
Copyright ©, Camden Media Inc All Rights Reserved. See our User Agreement, Privacy Policy and Data Use Policy. The material on this site may not be reproduced, distributed, transmitted, cached or otherwise used, except with prior written permission of Futurism. Articles may contain affiliate links which enable us to share in the revenue of any purchases made.
Fonts by Typekit and Monotype.