This strange glow in the Martian night sky is "as bright in the ultraviolet as Earth’s northern lights." 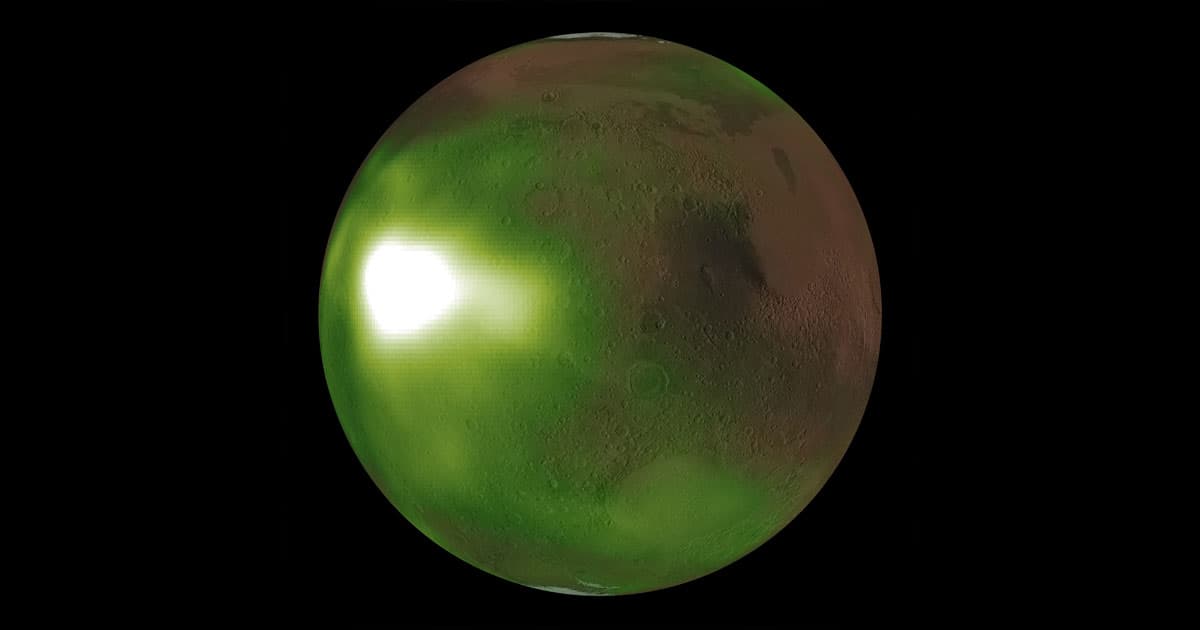 The stunning video comes courtesy of the Imaging Ultraviolet Spectrograph on board NASA's MAVEN (Mars Atmosphere and Volatile Evolution) spacecraft, which launched back in 2013.

The observations were detailed in a new paper appearing the journal Space Physics this week.

To the MAVEN  team's surprise, they found that the Martian atmosphere pulsed exactly three times every night, but only during spring and fall on the Red Planet. The new analysis also showed unexpected waves and spirals over the planet's poles during winter.

Here's how it works. On the day side of Mars, UV light from the Sun breaks down carbon dioxide and nitrogen molecules.

The resulting particles are then circulated by high-altitude winds from the day side to the night side, where they fall to lower altitudes. CO2 and nitrogen particles then recombine, creating energy, which is then released in the form of UV light.

"The ultraviolet glow comes mostly from an altitude of about 70 kilometers (approximately 40 miles), with the brightest spot about a thousand kilometers (approximately 600 miles) across, and is as bright in the ultraviolet as Earth’s northern lights," Zac Milby, student researcher at the University of Colorado's Laboratory for Atmospheric and Space Physics and co-author of the new study, said in a NASA statement.

"Unfortunately, the composition of Mars’ atmosphere means that these bright spots emit no light at visible wavelengths that would allow them to be seen by future Mars astronauts," he added.

The team is hoping to examine the phenomenon from an entirely new perspective next by looking at just above the edge of the planet, where they're hoping to get a more detailed look at vertical wind patterns and seasonal changes.

Read This Next
What Lies Beneath
Researchers Say "Conan the Bacterium" Could Be Hidden Beneath Mars’ Surface
Into Darkness
Inside NASA's Bold Proposal to Probe the Mysteries of Dark Matter
Water Canyon
Scientists Spot Hidden Water in Mars' Grand Canyon
Martian Ammonia
NASA Rover Detects Organic Molecules on the Surface of Mars
Myanus, Hisanus, Heranus...
Here's What Uranus Scientists Think About Your Disgusting Jokes
More on Hard Science
Quacks Like a Duck
Thursday on futurism
Those Headlines About Scientists Building a Wormhole Are Total Nonsense, People
It From Bit
Nov 22 on the byte
A Scientist Is Crowdfunding an Experiment to Check if We Live in a Simulation
Water Carrying
Nov 20 on the byte
Evidence Grows That Soggy Meteorites Gave Earth Its Oceans
READ MORE STORIES ABOUT / Hard Science
Keep up.
Subscribe to our daily newsletter to keep in touch with the subjects shaping our future.
+Social+Newsletter
TopicsAbout UsContact Us
Copyright ©, Camden Media Inc All Rights Reserved. See our User Agreement, Privacy Policy and Data Use Policy. The material on this site may not be reproduced, distributed, transmitted, cached or otherwise used, except with prior written permission of Futurism. Articles may contain affiliate links which enable us to share in the revenue of any purchases made.
Fonts by Typekit and Monotype.