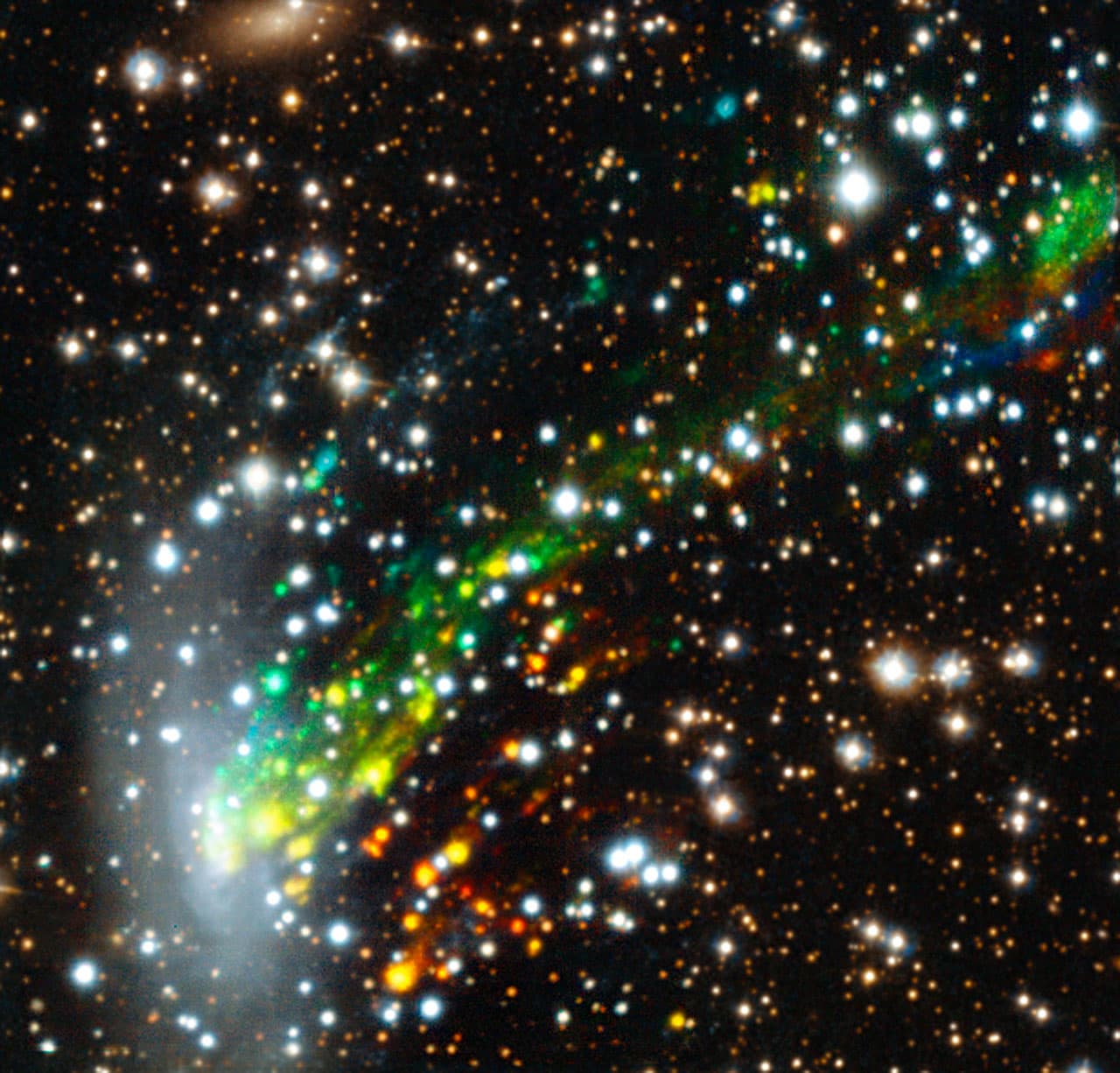 Equipped with a new instrument named the Multi-Unit Spectroscopic Explorer (MUSE), astronomers have used the 'Very Large Telescope' (VLT) to peer into the heart of a galactic collision. Thanks to MUSE, scientists working at the European Southern Observatory observed the target smashing through a massive galaxy cluster. What they learned from this chance encounter could be integral to our understanding of why, at a certain point, galaxy clusters stop creating new stars.

The target galaxy, dubbed ESO 137-001, is located 200 million-light years from Earth (in the Southern Triangle), and is on a collision course with a nearby galaxy cluster — the Norma Cluster. As the two continue to draw closer, ESO 137-001 is losing its gas supply through a process called ram-pressure stripping.

We can see examples of this process in our daily lives here on Earth. For instance, imagine you are speeding down the highway in your car. It's a nice sunny day out, and you are taking your dog on a trip to the dog park. As we all know, dogs love to hang their heads out the window and feel the wind in their face. Have you ever noticed your dog's fur as the wind blows through it? The process by which your dog's fur is blown back is similar to the process of ram-pressure stripping. Only, in your dog's case, he gets to keep the fur.

In the case of ESO 137-001, the galaxy is falling into the Norma Cluster at several million miles per hour. Concurrently, its gas supply — the fuel it needs for star formation — dwindles. As a result, ESO 137-001 is going through some drastic life changes. As the galaxy transitions from a blue, gas-rich galaxy to a red-tinged elderly one, scientists are hoping to catch the exact moment when its star formation switch will flip.

“It is one of the major tasks of modern astronomy to find out how and why galaxies in clusters evolve from blue to red over a very short period of time,” says Fumagalli. “Catching a galaxy right when it switches from one to the other allows us to investigate how this happens.”

The Norma Cluster is located very close to the plane of the Milky Way, and is shrouded by massive amounts of gas and dust, making it difficult to observe. This is where MUSE comes in. MUSE is able to produce a band of colors, aka spectrum, for every pixel in each image captured. This equals out to be about 90,000 spectra each time scientists observe an object. The results are incredible, and when combined, they yield a very complete "picture" of the observed objects including motion details and other properties. To put these results into perspective, previous studies of ESO 137-001 included, at most, 50 spectra.

MUSE, installed on one of VLT's 8-meter Unit Telescopes, is the first large integral field spectrograph ever installed on an 8-meter telescope. Thanks to its high-sensitivity, the research team was able observe gas — both in and around the galaxy — and detect its motion. All in just one hour of observation time.

These observations also told the team that the outer areas of ESO 137-001 have already lost their gas supply. The gas in the Norma Cluster is heated to millions of degrees, and pushes cooler gas out of ESO 137-001 as the two collide. This process begins in ESO 137-001's spiral arms. Matter in these areas is thinner than matter situated in the galactic center, and since gravity is stronger at the center, its able to last longer in this cosmic "tug-of-war" battle.

In the end, all of ESO 137-001's galactic gas will be stripped away, leaving bright streaks of gas trailing behind the galaxy. These gas tails can stretch over vast distances, sometimes spanning up to 200,00 light-years across.

Once all was said and done, MUSE led the team to several surprising conclusions. For starters, they discovered that the gas trails continue to rotate just like the galaxy does. Even the stars within ESO 137-001 follow the same rotation, even after the gas has been stripped away. This data tells us that the Norma Cluster is indeed responsible for the gas loss.

Matteo Fossati, one of the co-authors of the paper, sums up the findings for us: “With the details revealed by MUSE we are getting closer to fully understanding the processes that go on in such collisions. We see the motions of the galaxy and the gas in detail — something that wouldn’t be possible without the new and unique MUSE instrument. These and future observations will help us develop a better idea of what is driving the evolution of galaxies.”

The paper entitled "MUSE sneaks a peek at extreme ram-pressure stripping events. I. A kinematic study of the archetypal galaxy ESO137-001” will appear in Monthly Notices of the Royal Astronomical Society today (on November 10, 2014).