From dinosaur bones to alien acids, the Mini Museum is an amazing collection. 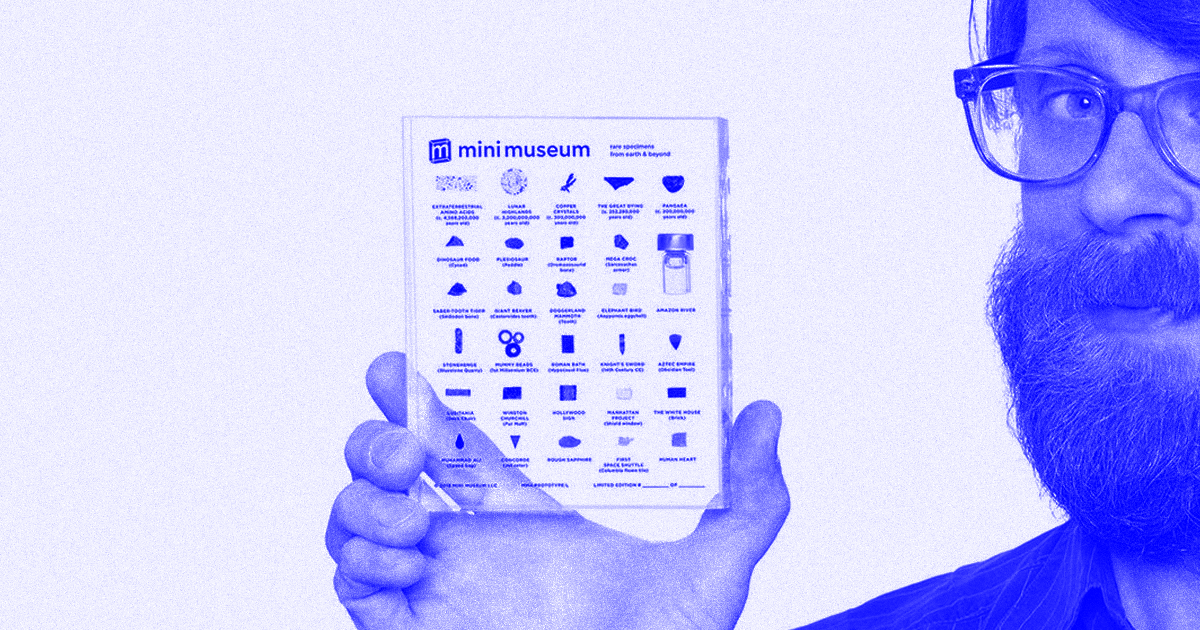 If you’re into science, nature, and history, you’ve probably spent countless hours of your life walking through museums, marveling at collections of rare and unique objects spanning billions of years of natural and human history. Maybe you’ve even fantasized about being insanely rich and having your very own collection of such objects. But now, thanks to Mini Museum, that fantasy can become a reality without the need for extreme wealth.

Mini Museum is collection of rare miniature specimens and artifacts—ancient and modern, natural and man-made—encased in a clear acrylic block the size of a small book. The website hails the collection as a “journey spanning billions of years across time, space, and life!” And though that sounds like hyperbole, anyone with a sense of curiosity and wonder about the world around us would find it hard to argue against its sentiment.

Mini Museum is the brainchild of Hans Fex, a modern day adventurer and the son of a research scientist. It was hatched when Fex was just in second grade. One day, after his dad returned from a research trip to Malta with some cool scientific specimens embedded into epoxy resin, Fex thought, came up with the idea of a portable museum containing tiny specimens of dinosaur bones and moon rocks. Thirty-three years later, in 2014, Fex partnered with friends Jamie Grove and Willie Vadnais to finally make his lifelong dream a reality. They launched the first edition of Mini Museum on Kickstarter with a goal of raising $38,000 to fund a few hundred Mini Museums. Instead, they raised $1.8 million.

Now, five years after, Hans Fex and company have just released the Fourth Edition of their Mini Museum. It's five inches tall, four inches wide, one inch thick, and includes 29 absolutely incredible specimens. Among them are extraterrestrial amino acids that date back to the origins of our solar system; igneous rock produced from the cataclysmic volcanic eruptions that caused the greatest extinction event in the history of the planet; a raptor bone from the cretaceous period dating back between 66 and 167 million years; Egyptian mummy beads dating back to the 1st millennium BCE; a fragment of the original Hollywood sign; and a piece of a punching bag once used by Muhammad Ali.

Every single Mini Museum is handmade and individually numbered with laser etching. They come with a certificate of authenticity, a detailed hard-cover specimen guide, a microfiber pouch, and display and storage box.

Whether you’re looking for an inspirational one-of-a-kind gift, or you’re a science and history buff looking to add something truly unique to your collection, the Mini Museum Fourth Edition is simply too cool to pass up.

Read This Next
Broken Egg
Archeologists Discover 1000-Year-Old Egg, Accidentally Break It
Brands We Love
The New 'What if 100' Book Uses Real Science to Answer Wild Hypothetical Questions
Brands We Love
Watch Thousands of Thought-Provoking Shows and Documentaries on Curiosity Stream
Brands We Love
Go Beyond The Science Headlines With The Fundamentals Of Physics Course
Brands We Love
Whatever Your Budget, Now You Can Own a Historic Piece of the Manhattan Project
More on Hard Science
Tractor Beam
Jan 26 on the byte
Scientists Build Working Tractor Beam, Although It's Comically Tiny
Having a Blast
Jan 18 on the byte
New Study Shows Where You Should Hide to Survive a Nuclear Attack
Offworld Amino
Jan 15 on the byte
Scientists Find Building Blocks of Life in Meteor That Smashed Into Family's Driveway
READ MORE STORIES ABOUT / Hard Science
Keep up.
Subscribe to our daily newsletter to keep in touch with the subjects shaping our future.
+Social+Newsletter
TopicsAbout UsContact Us
Copyright ©, Camden Media Inc All Rights Reserved. See our User Agreement, Privacy Policy and Data Use Policy. The material on this site may not be reproduced, distributed, transmitted, cached or otherwise used, except with prior written permission of Futurism. Articles may contain affiliate links which enable us to share in the revenue of any purchases made.
Fonts by Typekit and Monotype.