"Even at the global level, this is an extremely rare find." 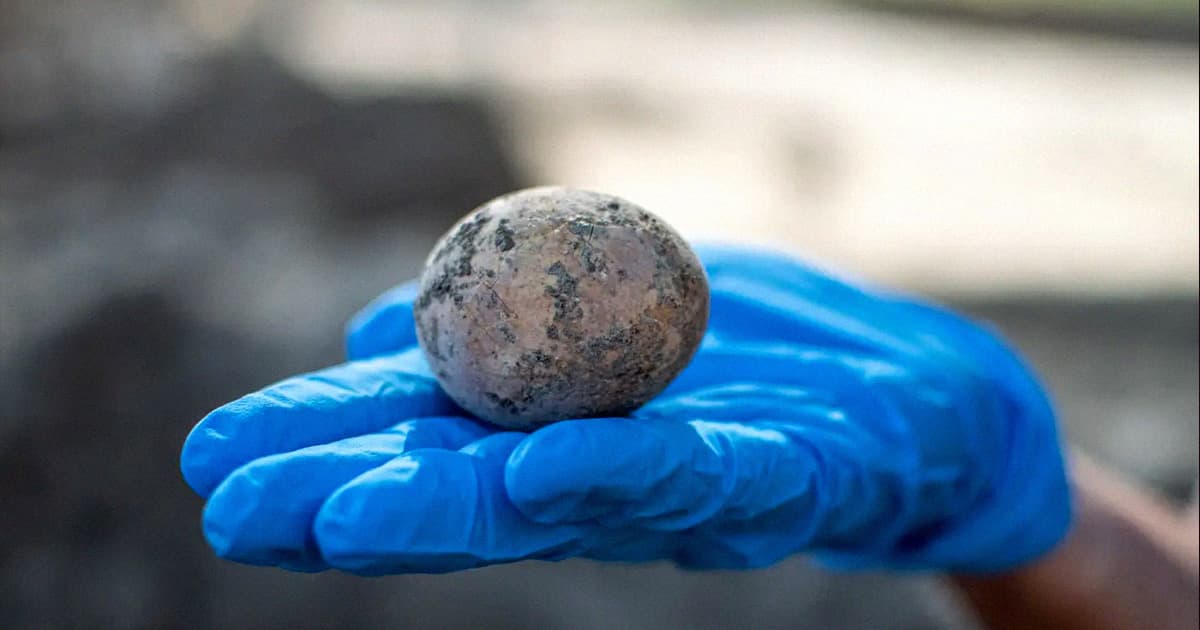 Archeologists in Israel made an incredibly rare discovery in the ancient industrial zone of Yavneh, a central Israeli city: a 1,000 year old chicken egg.

Astonishingly, the egg lay underground, preserved for all those years — until, tragically, they accidentally broke it in a lab run by archeologists from the Israel Antiquities Authority, as Haaretz reports.

It's a scientific loss, but also a poetic example of how frail our connection is to our distant past.

"We were astonished to find it," IAA archaeologist Alla Nagorsky told the newspaper. "From time to time we find fragments of eggshells, but a whole egg is extraordinary."

Nagorsky argued that the mishap didn't have too much of an effect on its archeological value. Some yolk remained in the shell and is now being tested for DNA. In fact, the archeologist told the newspaper it may have had to be broken at some point anyway to study its contents.

Other findings in the digging site included three dolls made of bone, typical of the 11th century in the area, and an oil lamp.

The lamp's particular style was only really around about 1,000 years ago, causing the archeologists to conclude the egg was from the same period.

"Eggshell fragments are known from earlier periods – for example, in the City of David and at Caesarea and Apollonia," the IAA's leading ancient poultry expert Lee Perry Gal told Haaretz. "But due to the eggs’ fragile shells, hardly any whole chicken eggs have been preserved."

Much older and more robust eggs like ostrich eggs, have been found more frequently, with some decorated ones being discovered, a practice that dates back to at least 60,000 years.

Despite the accidental lab omelet, the archeologists are excited by the astonishing find.

"Even at the global level, this is an extremely rare find," Gal said.

Read This Next
Brands We Love
Whatever Your Budget, Now You Can Own a Historic Piece of the Manhattan Project
Brands We Love
This Company Ships Dinosaur Fossils and Other Artifacts Right to Your Door
Brands We Love
Own a Piece of the Apollo 13 Moon Mission for a Ridiculously Low Price
Brands We Love
CuriosityStream Is a Science-Focused Streaming Service for People Who Love to Learn
Brands We Love
Mini Museum Lets Science Lovers Own Priceless Artifacts for an Affordable Price
More on Hard Science
Past Particle
Tuesday on the byte
Large Hadron Collider Discovers Strange New Particles
Moved to Tears
Jun 30 on the byte
Scientists Say New James Webb Images Are So Powerful That It Was Emotional Just Looking at Them
Good God
Jun 28 on the byte
Huge Cloud of Toxic Yellow Gas Kills 13
READ MORE STORIES ABOUT / Hard Science
Keep up.
Subscribe to our daily newsletter to keep in touch with the subjects shaping our future.
+Social+Newsletter
TopicsAbout UsContact Us
Copyright ©, Camden Media Inc All Rights Reserved. See our User Agreement, Privacy Policy and Data Use Policy. The material on this site may not be reproduced, distributed, transmitted, cached or otherwise used, except with prior written permission of Futurism. Fonts by Typekit and Monotype.