3.5 Million Years Ago, Our Galaxy Was Rocked by an Explosion

And it could happen again. 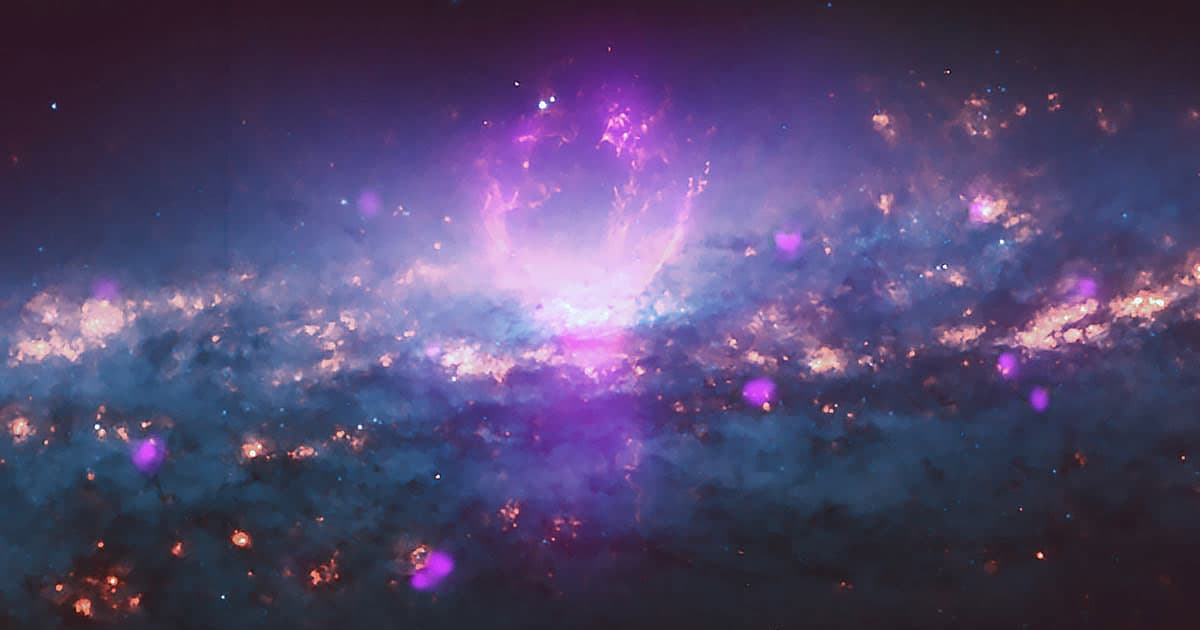 Roughly 3.5 million years ago, the sky turned into a massive flare of bubbling gas shining out of the galaxy's center — a true spectacle for the early ancestors of modern humans. And there's a chance we could catch the next event with our own eyes.

The explosion, also known as a Fermi bubble, was essentially our galaxy discharging a huge quantity of nuclear energy, including deadly ionizing radiation emanating from the supermassive black hole at the center of the Milky Way.

And according to a new study published on the preprint site arXiv, the epic event took place about 3.5 million years ago.

The discovery is redefining how we've come to understand our galaxy — which has been far more active than we thought.

Astronomers have been observing much smaller "burps" of the center of the galaxy for decades, but never something quite this violent.

"It's an amazing thought that, when cave people walked the Earth, if they'd looked off in the direction of the galactic center, they'd have seen some kind of giant ball of heated gas," lead author and director of the Sydney Institute for Astronomy at the University of Sydney Bland-Hawthorn said in a video about the study.

It must've been an extraordinary spectacle.

"The flare must have been a bit like a lighthouse beam," Professor Bland-Hawthorn told Astro 3D. "Imagine darkness, and then someone switches on a lighthouse beacon for a brief period of time."

And you didn't have to blink: the researchers estimate it could've lasted for some 300,000 years — an eternity to humans, but a short blip in galactic terms.

To find out when the explosion occurred, the researchers used data collected by the Hubble Space Telescope.

The discovery could give us insight into the formation of celestial bodies.

"We do think that [these events affect] how stars develop in the long-term evolution of our galaxy, but we just don't know exactly how," Bland-Hawthorn told ABC.

"Everyone says give it time, it will explode again," Bland-Hawthorn added. "It's the same with this galactic centre, give it time and it will blow up again."

Read This Next
Black Hole Snapshot
Scientists Release Image of Black Hole at Center of Our Galaxy
The Last Strand
Scientists Puzzled by Weird "Strands" at the Center of Our Galaxy
Kill It With Fire
Astronomers Find Five Dozen Baby Black Holes in Distant Psychotic Chaos Galaxy
Pac Man Black Hole
A Black Hole Bites a Chunk Out of This Star Every 114 Days
Hol Up
A Supermassive Black Hole Is Missing, NASA Says
More on Hard Science
Tractor Beam
Jan 26 on the byte
Scientists Build Working Tractor Beam, Although It's Comically Tiny
Having a Blast
Jan 18 on the byte
New Study Shows Where You Should Hide to Survive a Nuclear Attack
Offworld Amino
Jan 15 on the byte
Scientists Find Building Blocks of Life in Meteor That Smashed Into Family's Driveway
READ MORE STORIES ABOUT / Hard Science
Keep up.
Subscribe to our daily newsletter to keep in touch with the subjects shaping our future.
+Social+Newsletter
TopicsAbout UsContact Us
Copyright ©, Camden Media Inc All Rights Reserved. See our User Agreement, Privacy Policy and Data Use Policy. The material on this site may not be reproduced, distributed, transmitted, cached or otherwise used, except with prior written permission of Futurism. Articles may contain affiliate links which enable us to share in the revenue of any purchases made.
Fonts by Typekit and Monotype.