A Gang of Men Apparently Stole the Utah Monolith

It "popped out and landed on the ground with a loud bang." 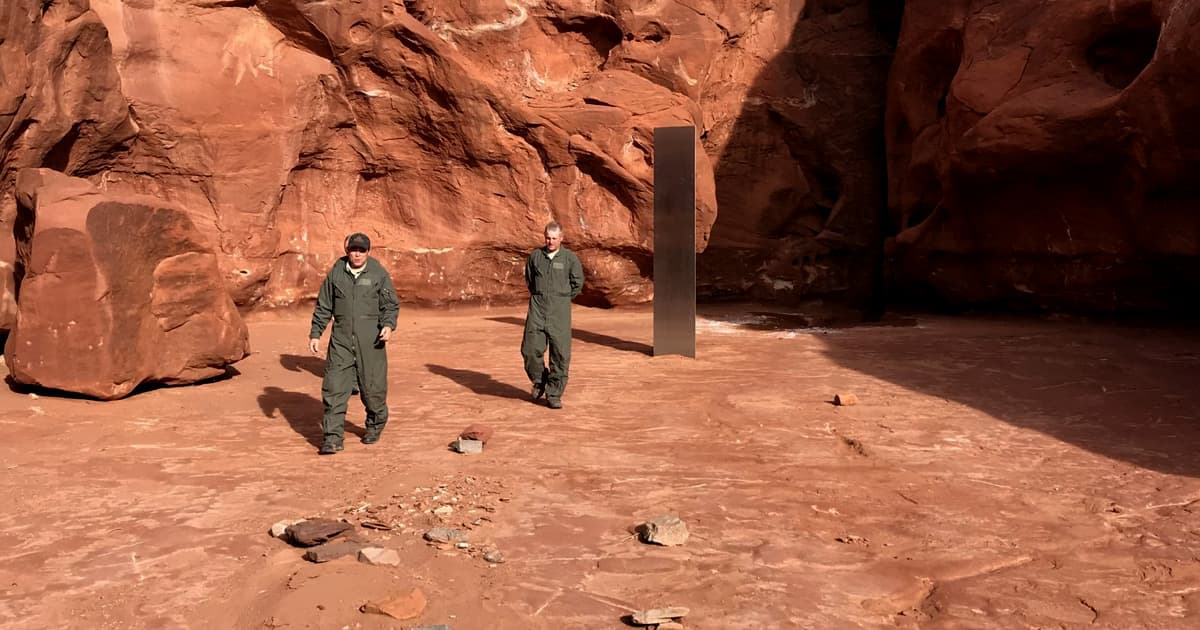 Days after its discovery, the otherworldly installation disappeared without a trace.

But thanks to a detailed first-hand account posted by nature photographer Ross Bernards on Instagram, we may just have figured out who stole it.

Spoiler alert: they weren't aliens — and they don't sound like "men in black" either.

Bernards wasn't the only one looking to snap a picture of the installation, he recalls.

"On Friday, 3 friends and myself drove the 6 hours down to the middle of nowhere in Utah and got to the 'trailhead' around 7 PM after passing a sea of cars on our way in," the photographer wrote in the post.

"For the next hour and 40 minutes we had the place to ourselves," Bernards recalls. While setting up his next drone shots, he and his buddies "heard some voices coming up the canyon."

The burglars had shown up at the scene.

The four "guys rounded the corner and two of them walked forward," Bernards wrote. "They gave a couple of pushes on the monolith and one of them said 'You better have got your pictures.'"

What proceeded was the monolith heist of the century — and without the need for expert safe cracking tools, ropes, and night vision goggles.

The ragtag team of four "came up and pushed it almost to the ground on one side, before they decided push it back the other when it then popped out and landed on the ground with a loud bang," according to Bernards.

All it took was a wheelbarrow to run off with the mysterious artifact.

It must have been a strange sight. Bernards recalls seeing "at least 70 different cars (and a plane) in and out" with "nobody following a path or each other."

The onlookers — just as many had predicted — couldn't care less about the pristine and largely untouched wilderness around them. "We could literally see people trying to approach it from every direction to try and reach it, permanently altering the untouched landscape," the photographer wrote.

The exact motives of the monolith bandits are still unknown, as is their identity. One of them did reportedly tell Bernards that "this is why you don't leave trash in the desert."

More on the monolith: Mystery “Monolith” Disappears From Utah Desert

Read This Next
Alien Sunburn
Pentagon Whistleblower Hints That Pilots Who Encountered UFOs Had Radiation Burns
How Not What
NASA Scientist: We Should Take UFOs as Seriously as Mars Research
UFO Threat
Former Navy Pilot Says Team Saw Unidentified Objects "Every Day" For Years
Futurism
This startup plans to plant 1 billion trees per year using drones
More on Robots & Machines
From the Dept. of...
12:00 AM on futurism
The Best Wireless Mouse of 2023
Balloon Boy
Yesterday on the byte
Other Chinese Balloons Apparently Flew Over America, But Nobody Noticed Them
From the Dept. of...
Yesterday on futurism
The Best Earbuds Under $50 in 2023
READ MORE STORIES ABOUT / Robots & Machines
Keep up.
Subscribe to our daily newsletter to keep in touch with the subjects shaping our future.
+Social+Newsletter
TopicsAbout UsContact Us
Copyright ©, Camden Media Inc All Rights Reserved. See our User Agreement, Privacy Policy and Data Use Policy. The material on this site may not be reproduced, distributed, transmitted, cached or otherwise used, except with prior written permission of Futurism. Articles may contain affiliate links which enable us to share in the revenue of any purchases made.
Fonts by Typekit and Monotype.