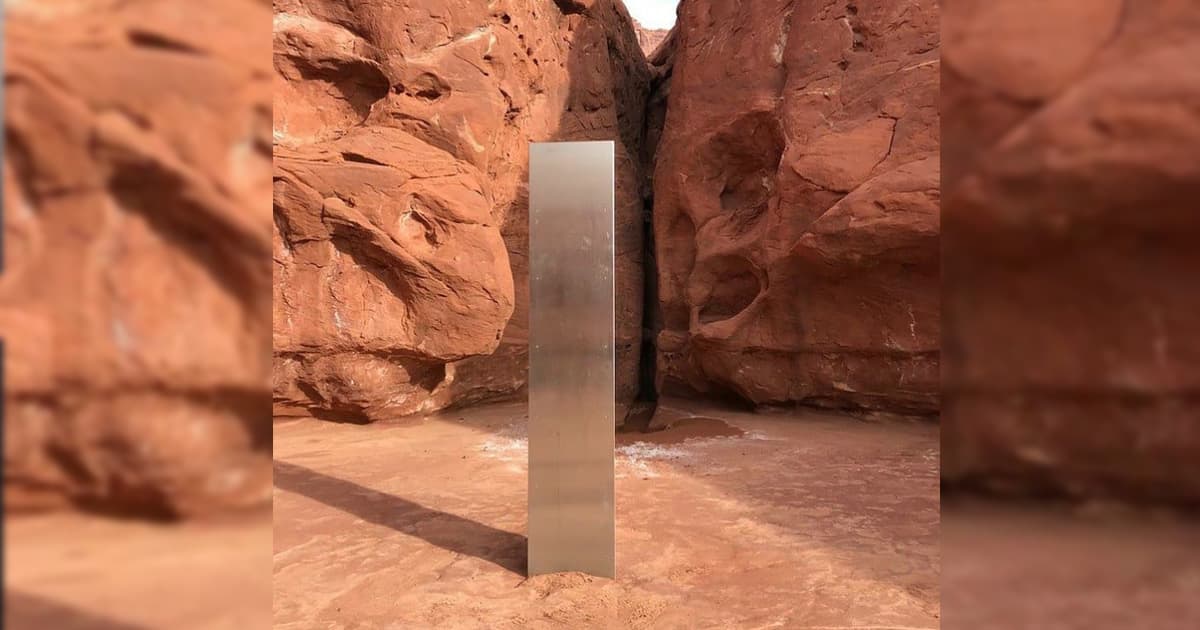 A team of biologists have discovered a bizarre metal monolith in the wilderness in Utah — and they have no idea where it came from.

"One of the biologists is the one who spotted it and we just happened to fly directly over the top of it," pilot Bret Hutchings, who flew a helicopter over the site, told local news station KSLTV.

The @UtahDPS helicopter was assisting the @UtahDWR in counting bighorn sheep in remote southern Utah Wednesday when the crew encountered something entirely 'out of this world'...@KSL5TV #KSLTV #Utah

Between ten and 12 feet high, the shiny monolith stood out like a sore thumb in the otherwise natural landscape. Its location has been intentionally kept under wraps to keep crowds away.

The obvious reference, of course, is the 1968 film "2001: A Space Odyssey," which involves a number of monoliths placed in the solar system by extraterrestrials during prehistory.

"We were kind of joking around that if one of us suddenly disappears, then the rest of us make a run for it," Hutchings said.

It's still unclear what the hell the shiny metal monolith is doing miles away from civilization.

The pilot's best guess as to what it could be was that it came from "some new wave artist or something or, you know, somebody that was a big '2001: A Space Odyssey' fan."

READ MORE: Mysterious metal monolith found in the wilds of Utah by team of biologists [The Independent]

More on alien artifacts: Scientist: Aliens Facing the Apocalypse Would Be Easier to Find

3D-Printed Replacement Horns Might Save Rhinos from Extinction
10. 29. 15
Read More
Save Yourselves
Furious Marsupial So Thirsty For Sex That It’s Dying, Scientists Warn
6:25 PM
Read More
We're in Hell
Scammers Are Already Convincing Idiots They Can Get Rich Using ChatGPT
6:11 PM
Read More
+Social+Newsletter
TopicsAbout UsContact Us
Copyright ©, Camden Media Inc All Rights Reserved. See our User Agreement, Privacy Policy and Data Use Policy. The material on this site may not be reproduced, distributed, transmitted, cached or otherwise used, except with prior written permission of Futurism. Articles may contain affiliate links which enable us to share in the revenue of any purchases made.
Fonts by Typekit and Monotype.