Meet Quaoar, the Planetoid Beyond Pluto 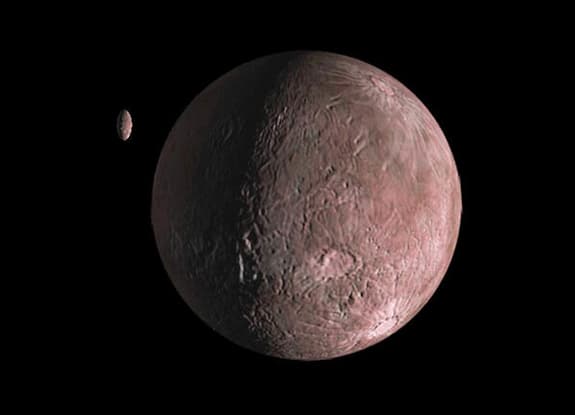 Most of us are familiar with the larger planets in our solar system, but once we get to Neptune, things start to get a little murky. This isn't too surprising, as Pluto (the most famous dwarf planet and the first major object that appears after one passes Neptune) was only first visited on July 14, 2015, which was only just a few short months ago.

However, there is a lot more to our solar system than the Sun and 8 major planets, so take a moment to meet Quaoar, the planetoid in the outer edges of our solar system.

This object was first discovered in 2002, and it heralded in a new age of astronomy. Quaoar, as well as a few other small worlds discovered beyond the bounds of Pluto, forced the International Astronomical Union to form a new classification system for planets, planetoids, and dwarf planets.

Ultimately (as most of you already know), this new naming process led to Pluto being "demoted"  from planethood and being reclassified as a dwarf planet. Yet, notably, a dwarf planet is still a planet; it's just a specific classification or subclass.

Though Quaoar is classified as a planetoid, it actually seems to be massive enough to be considered a dwarf planet; however, it has not been reviewed and classified as such (yet).

Quaoar was discovered by Mike Brown and Chadwick Trujillo of the California Institute of Technology. Brown and Trujillo were able to find Quaoar using a 48-inch telescope at the Palomar Observatory in California. The tiny world lurks on the edge of the Kuiper Belt, a place that lies past Neptune and extends about 30-100 AU from the Sun. It is home to a number of icy objects, and it is also the home of Pluto, Eris, Haumea , and MakeMake—some of the other dwarf planets of our solar system. Of course, it is also home to Nix, Hydra, Charon, Styx, and Kerberos (Pluto's five moons).

Quaoar is about 42 astronomical units away from our little planet. That's about 4 billion miles (6 billion km). To give you some perspective, that's about a billion kilometers more distant than Neptune. It's so far that takes about 288 Earth-years for Quaoar to go once around the Sun in a roughly circular orbit.

That orbit is a bit longer than Pluto's, which takes about 247 years to complete one revolution around the Sun (90,553 Earth days).

Quaoar measures in at about 1,092 km (679 miles) in diameter. That may be a bit small by planet standards, but it is rather large when compared to other objects in our solar system. As NASA notes, "Quaoar is greater in volume than all known asteroids combined. Researchers suspect it's made mostly of low-density ices mixed with rock, not unlike the makeup of a comet. If so, Quaoar's mass is probably only one-third that of the asteroid belt."

And it even has a moon, which is named after the god called Weyot, the son of Quaoar.

The team who discovered the planetoid suggested the name "Quaoar," who is the god of creation in the Native American Tongva tribe (the native inhabitants of the Los Angeles basin, which is where Caltech is located). Since Quaoar is so far away, little else is known about this tiny, icy world. However, future missions will hopefully allow us to get a closer peek at the conditions surrounding Earth's distant little brother.