Meet the Coldest and Least Massive Gas Giant Ever Imaged 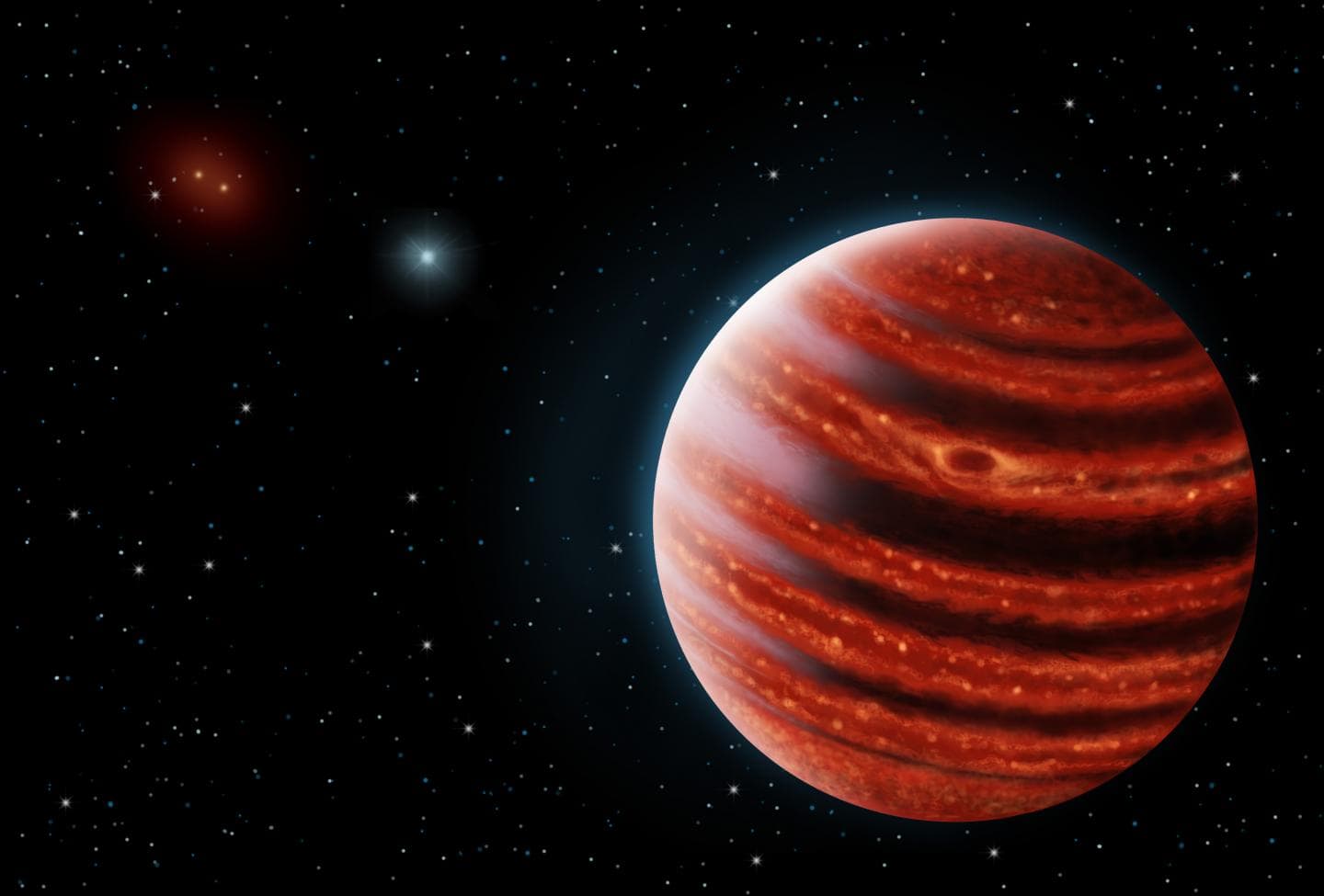 One of the most notable astronomy findings this year was the discovery of 51 Eridani b, a Jupiter-like exoplanet that is the lowest-mass planet ever directly imaged around another star. As the planet resembles Jupiter in its infancy, it could yield clues to the formation of our solar system’s gas giants, helping to unlock the secrets that are hidden deep beneath the gassy layers of their  atmospheres.

The newly discovered exoplanet shows the strongest methane signature ever detected on an alien planet, which should provide important information on how 51 Eridani b, and other gas giants, formed.

Julien Rameau, a postdoctoral researcher at the University of Montreal and a member of the team that discovered the planet, is confident about the importance of the new findings.

“This is the first time we directly see a planet with a lot of methane in its atmosphere and a mass close to Jupiter. The previous imaged planets were more massive and have atmospheres very different from our gas giants, with a lot of thick clouds and not, or a little, methane content,” Rameau told FQTQ. “51 Eridani b is therefore unique to understand the atmospheres of Jupiter-like planets. We are now able to probe systems which have the same scale that our solar system. It is extremely important to understand their formations, evolution, and the physics of their atmospheres.”

As already mentioned, 51 Eridani b is young by astronomical standards – only 20 million years old (Jupiter is about 4.5 billion years old). It is roughly twice the mass of Jupiter, other directly-imaged planets are usually five times the mass of our solar system’s biggest gas giant (or more). It is also one of the coldest - 400 degrees Celsius - and then there is the previously mentioned atmospheric methane signal. According to researchers, all of these characteristics indicate that it strongly resembles the young Jupiter.

“The planet shares properties that resemble those of Jupiter when it was young,” Rameau said. “One way to understand Jupiter formation is too look at young planets which still carry information about their formations.”

It is believed that the gas giants in our solar system formed by building up a large core over a few million years and then pulling in a huge amount of hydrogen and other gasses to form an atmosphere. The core-buildup process can also form rocky planets like Earth; a fast and hot collapse might only make giant gassy planets. 51 Eridani b is young enough that it could "remember" its formation.

But still a lot of work needs to be done to fully understand the newly discovered planet’s composition and, therefore, better know our solar system’s gas giants. The scientists will have to employ more powerful scientific instruments for the job.

“The modelling of the spectrum gave us its temperature, its pressure, and its rough composition – hydrogen and helium with methane and water. Directly seeing the presence of methane and water in this faint and close-in planet is already a challenge that the Gemini Planet Imager (GPI) [the instrument used to discovered 51 Eridani b] was able to overcome. It is currently not possible to qualitatively measure the actual composition or detect other elements because the resolution and sensitivity of GPI is too low. This requires extremely powerful instruments,” Rameau said.

Rameau believes that this discovery will certainly motive the international community to learn more about the planet and the architecture and history of the system. Astronomers will monitor the orbit of the planet, using new planet imagers like European Southern Observatory’s (ESO) Spectro-Polarimetric High-contrast Exoplanet REsearch (SPHERE) and Very Large Telescope (VLT) to improve the quality of the spectrum and observe at different wavelengths to refine the measurements of the mass, temperature and pressure. They will also search for additional giant planets which might be present in the system.

“51 Eridani b will certainly be one of the most studied planets in the coming years,” Rameau concluded.

Read This Next
Jupiter Ascending
A Wave of Incredible Heat Ripped Through Jupiter
Futurism
The James Webb Space Telescope Is Going to Stare Straight Into Jupiter
Venus Life Trap
Research: Jupiter Likely Turned Venus Into an Uninhabitable Hellhole
Young Hot Jupiter is My Drag Name
This Super Young Jupiter-Sized 'Hot Planet' is Puzzling Astronomers
Jupiter's Moon Ascending
Scientists Confirm Water Vapor Above the Surface of Europa
More on Hard Science
Warped Tour
Yesterday on futurism
Professor Believes Door to Warp Drive May Lie With Ethylene Glycol
Sky Bursts
Yesterday on the byte
Astronomers Intrigued by 25 Mysterious Repeating Radio Signals From Deep Space
Tractor Beam
Jan 26 on the byte
Scientists Build Working Tractor Beam, Although It's Comically Tiny
READ MORE STORIES ABOUT / Hard Science
Keep up.
Subscribe to our daily newsletter to keep in touch with the subjects shaping our future.
+Social+Newsletter
TopicsAbout UsContact Us
Copyright ©, Camden Media Inc All Rights Reserved. See our User Agreement, Privacy Policy and Data Use Policy. The material on this site may not be reproduced, distributed, transmitted, cached or otherwise used, except with prior written permission of Futurism. Articles may contain affiliate links which enable us to share in the revenue of any purchases made.
Fonts by Typekit and Monotype.