Drying Up
3. 16. 21 by Victor Tangermann
Drying Up
/Hard Science

Mars' Oceans May Have Drained Into Its Interior

There may be a huge cache of water inside Mars. 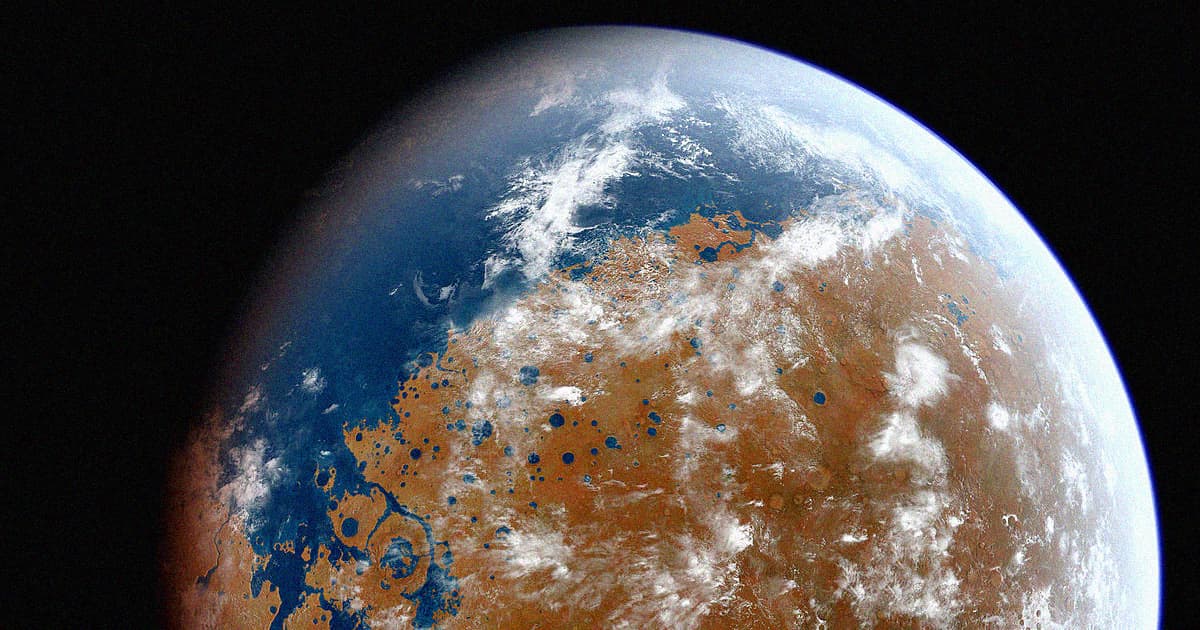 There may be far more water trapped inside Mars than we initially thought.

According to a new paper published by researchers at Caltech in the journal Science today, Mars may still hold anywhere between 30 and 99 percent of the ancient water from its lakes and oceans within its crust, with less water escaping through the planet's atmosphere than previously thought.

It's an exciting prospect, suggesting that most of the water may not have disappeared into space as the planet's atmosphere thinned out over the last three billion years.

Back then, scientists have theorized that Mars had enough water to cover the whole planet by an ocean 330 to around 5,000 feet deep, about half of the Atlantic ocean, according to a NASA statement on the new research.

Some of this water did escape into space via the Martian atmosphere — but not all, according to the researchers.

"Atmospheric escape doesn’t fully explain the data that we have for how much water actually once existed on Mars," lead author and Caltech PhD candidate Eva Scheller said in the statement.

The researchers suggest that the two processes combined — water being trapped in minerals in the planet's crust and atmospheric escape — could account for a relatively high percentage of observed deuterium.

Deuterium is a hydrogen atom which is "heavier," because it has a proton and a neutron, when compared to its "lighter" counterpart, which has just a proton. This "heavier" hydrogen is far less likely to escape into atmosphere than its counterpart.

The team concluded that much of this water is trapped in hydrous minerals, something you can find here on Earth as well. This could account to anywhere between 30 and 99 percent of Mars' total water loss in its first one to two billion years, according to the researchers, with atmospheric escape accounting for the rest.

Rather than being recycled back into the atmosphere through volcanism, the water trapped in minerals on Mars are drying out permanently. In other words, "water [on Mars] is now locked up in the crust or been lost to space," according to Michael Meyer, lead scientist for NASA’s Mars Exploration Program.

There's a lot we still don't know about how much water there is on Mars right now, making it almost impossible to predict just how habitable the Red Planet is.

But we do know that Mars was likely far more habitable billions of years ago. Most excitingly, NASA's Perseverance Mars rover is exploring the Jezero crater, believed to have been an ancient lakebed several billion years ago.

"It will be right there to investigate what might have been the mechanisms that caused water sequestration in these minerals in the crust," Scheller told MIT Technology Review.

Read This Next
What Lies Beneath
Researchers Say "Conan the Bacterium" Could Be Hidden Beneath Mars’ Surface
Water Canyon
Scientists Spot Hidden Water in Mars' Grand Canyon
Martian Ammonia
NASA Rover Detects Organic Molecules on the Surface of Mars
Joseph Strikes Again
Experts Shred Paper Claiming to Identify Mushrooms on Mars
Mars Shrooms
Extremely Dubious Research Claims to Spot Fungus Growing on Mars
More on Hard Science
Tractor Beam
Jan 26 on the byte
Scientists Build Working Tractor Beam, Although It's Comically Tiny
Having a Blast
Jan 18 on the byte
New Study Shows Where You Should Hide to Survive a Nuclear Attack
Offworld Amino
Jan 15 on the byte
Scientists Find Building Blocks of Life in Meteor That Smashed Into Family's Driveway
READ MORE STORIES ABOUT / Hard Science
Keep up.
Subscribe to our daily newsletter to keep in touch with the subjects shaping our future.
+Social+Newsletter
TopicsAbout UsContact Us
Copyright ©, Camden Media Inc All Rights Reserved. See our User Agreement, Privacy Policy and Data Use Policy. The material on this site may not be reproduced, distributed, transmitted, cached or otherwise used, except with prior written permission of Futurism. Articles may contain affiliate links which enable us to share in the revenue of any purchases made.
Fonts by Typekit and Monotype.