The Life (& Death) of The Universe's First Star 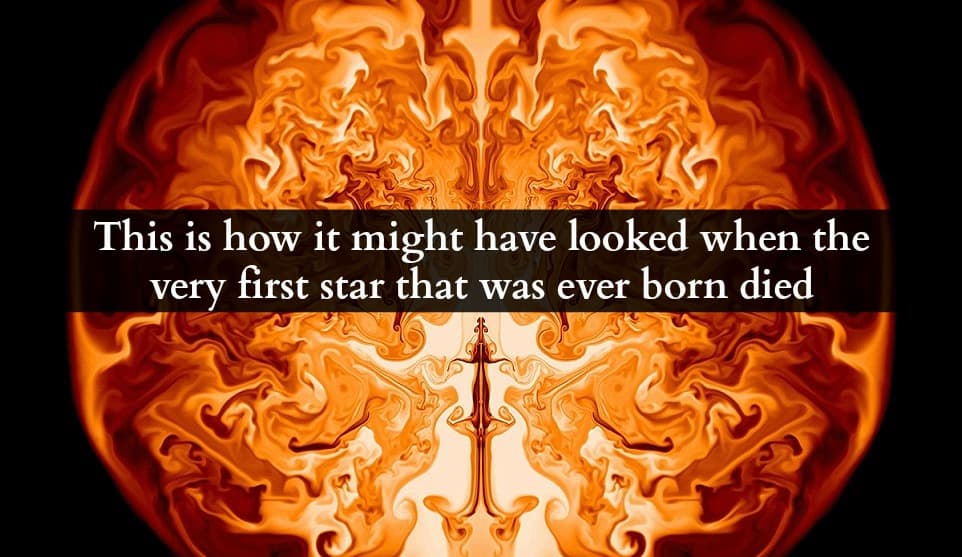 More than 13.8 billion years ago, out popped the universe, or at least the raw ingredients for it, in an event to beat all events, now called the Big Bang. The package from which it sprang is by no means neat or tidy. Nor is it wrapped in a pretty bow, but understanding these first few moments, along with those that preceded them, is paramount to understanding every facet of the universe as we know it today (from the quantum realm all the way to the large-scale stuff).

Based on our current understanding of the universe's formative years, space was a soupy mess—much too hot for charged electrons and protons to come together to produce electrically neutral hydrogen atoms. That is, until about 378,000 years old after the big bang, a period of time known as the recombination era. From there, the very first generation of stars came into being, sparking the end of the so-called dark ages. However, the first generation of stars behaved a lot differently than those that live and die in this current epoch.

Now, researchers from the University of California, Santa Cruz and the University of Minnesota have formulated "explosive" renderings that show the death of the first star to ever grace the universe with its presence.

Computer simulations show that, in death, the star itself — which, like other stars in its age-group, weighed between 55,000 and 56,000 solar masses — could have disintegrated into nothingness, not even leaving a black hole behind. However, a key point in its demise was when it ejected the bulk of its heavy metals out into the interstellar medium—from which, the universe formed.

"We found that there is a narrow window where supermassive stars could explode completely instead of becoming a supermassive black hole—no one has ever found this mechanism before," says Ke-Jung Chen, a postdoctoral researcher and the lead author of the paper.

The physicists used the supercomputers situated at the Department of Energy's (DOE's) National Energy Research Scientific Computing Center (NERSC) and Minnesota Supercomputing Institute at the University of Minnesota to run the new simulations. What's more is that they employed the use of something called CASTRO (short for "Compressible Astrophysics") — a code that was developed by DOE's Lawrence Berkeley National Laboratory's (Berkeley Lab's) Computational Research Division — along with a different code called KEPLER..

KEPLER is sophisticated in the fact that it was designed to factor in important functions like nuclear fusion and stellar convection (the internal mechanism that circulates fuel throughout a star), and, relevantly, for massive stars, "photo-disintegration of elements, electron-positron pair production, and special relativistic effects." (The last part is particularly important for stars that pass over 1,000 solar masses threshold).

Using both codes in conjunction with one another, they learned that stars in the 55,000 to 56,000 solar mass weight class live for just 1.69 million years until relativistic effects knock the stars off-kilter, sending them on a downward spiral that culminates in the stars collapsing in on themselves and going supernova.

However, to backtrack a bit, just before the trigger is pulled, larger stars start feverishly synthesizing heavier elements in their core, like oxygen, magnesium, neon, leading up to iron. Once they start burning iron (the heaviest element stars can fuse), they are as good as dead, as the release of pent-up energy irrevocably destabilizes the stars, triggering the expulsion of the elements that were synthesized during a high-mass star's final moments. This gravitational binding energy, conversely, also prevents the star from further collapsing into a singularity (something called neutron degeneracy also plays a huge role).

However, the new simulation sheds additional light on how the process differed in a first generation star. According to the researchers, "These simulations show that once collapse is reversed, Rayleigh-Taylor instabilities mix heavy elements produced in the star's final moments throughout the star itself."

"Depending on the intensity of the supernovae, some supermassive stars could, when they explode, enrich their entire host galaxy and even some nearby galaxies with elements ranging from carbon to silicon. In some cases, supernova may even trigger a burst of star formation in its host galaxy, which would make it visually distinct from other young galaxies."

The team hopes these signatures might be perceptible with help from the European Space Agency's upcoming Euclid near-infrared observatory, which won't launch for another year.