Can a Star Explode without Leaving any Remnant? 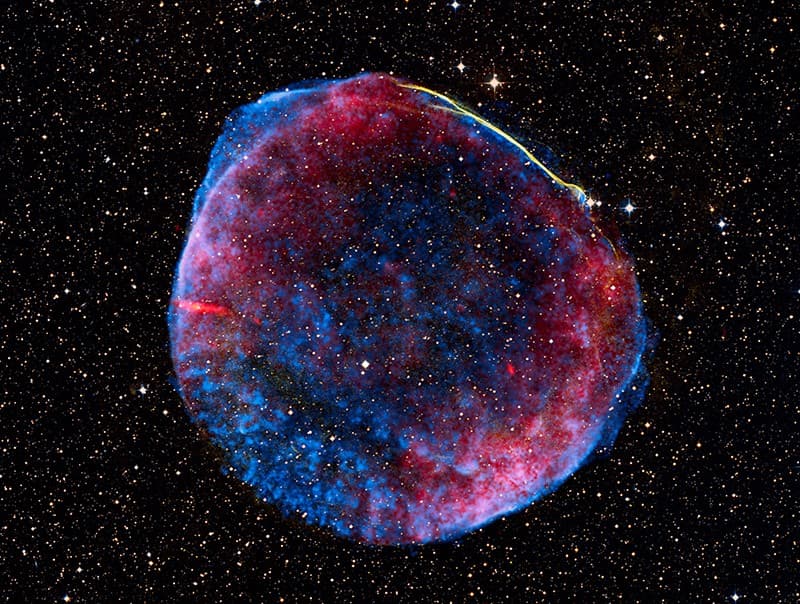 We've all heard the story... Giant molecular cloud meets gravity, gravity makes star, star meets gravity and makes fusion. Fusion is the sum of hydrogen meets hydrogen (at its most basic form) and makes helium. Eventually hydrogen runs out of more hydrogen and BAM, helium meets helium to make carbon and oxygen... And so on and so forth until... Iron doesn't want to play nice (it's the antisocial element), so when gravity meets iron... Supernovae! It is at this point that we would expect to have some sort of supernova remnant left over, a neutron star or a black hole. At least, that is the normal procession of events that we've been hearing for a long time. What if, however, a star didn't quite follow the aforementioned pattern? What if the star was so unstable that it blew itself apart prematurely? Can a star explode without leaving a trace? Could this actually happen??

Before I delve any further into this particular question, I am going to let you all come up with a conclusion to the answer! I am going to give you some of the cold hard facts about stars, and then let you make your decision as to whether a star could blow itself to oblivion before its time, leaving no real trace of its existence. Some of you make already know the answer, or most of the information that is to follow, but I must give enough facts for everyone to be able to make an informed decision (and hopefully not make this too long). To begin, it would be best to briefly describe what makes a star "burn." Strictly speaking, stars don't actually burn; burning implies combustion, like that of a fire. Although some oxygen does exist within our sun, it doesn't burn so much as explodes. Our star is in its main sequence, this means that, right now, it is fusing hydrogen atoms into helium atoms. Many of us have seen film clips of hydrogen bombs going off .

Now, imagine an uncountable amount of those bombs going off every second! So why doesn't our sun blow itself apart right now? A star is held together by a fine balance between gravitational contraction (trying to collapse the sun) and radiation pressure (trying to blow the sun to oblivion), the gravity is supplied by the mass of our sun and the radiation pressure is LOTS of hydrogen fusion explosions. In short, our star is in hydrostatic equilibrium--inward pressure is equal outward pressure.

Next, in another five or so billion years time our star will run out of hydrogen to burn at its core. It is at this point that helium burning begins; however, there is a step to consider before this. Because our star is relatively small on the cosmic scale, it doesn't have a clean transition to the helium burning stage of its life, so a cataclysm must occur! This is known as the Helium Flash, a thermonuclear runaway event where the entire helium core bursts into life in an instant, a massive amount of energy is released. It is, however, not enough to destroy the star. True, it will make it expand considerably as the outer parts take the brunt of the explosion, but gravity will have its way and pull the material back in again until a new equilibrium is reached. This new equilibrium will be larger than on the hydrogen burning stage, but smaller than what it achieved shortly after the helium flash. Larger stars (a little as twice the size as our sun) don't have a helium flash, but the reason why is a topic for another day. At this point, it is important to note that variable or pulsating stars are the exception to this equilibrium.

Many larger stars at some point during their lives will, for a while, become unstable. When they just can't reach an equilibrium, they pulsate, getting brighter and dimmer. Cepheid Variables are just one type of these pulsating stars. They are very good for using as distance calculators, as they do not pulsate themselves out of existence 🙂 These instabilities are quite temporary, so a Cepheid Variable may potentially not be one in ten years time. At the end of a stars life it will end up two different ways: 1) If it's a smaller star, it'll end up as a white dwarf of some description. 2) If it's a larger star, it'll go up in a supernova. We're just going to focus on the second option here, the supernova and what causes it. I am just briefly going to skim over this subject, it's an article on its own! So, as mentioned in the offset, iron doesn't play well with others, and gravity somewhat wins.

Through all of the previous stages of a stars life, gravity keeps trying to crush the core. However, it continues to fuse and produce energy; hydrogen fuses with hydrogen to produce helium; helium fuses with helium to produce carbon and oxygen...this keeps it in hydrostatic equilibrium. Iron won't fuse with iron to produce energy so when gravity meets iron, iron literally gets crushed,--crushed more and more. If the iron core is going to be heavier than 1.4 solar masses, electron degeneracy can't hold it up. As a result, the electrons and protons fuse together to make neutrons. If the core is less than 3-5 solar masses then a neutron star will be the supernova remnant, if more, a black hole will emerge. Briefly, with a 2 solar mass neutron star core, when the star runs out of all fuel the iron core shrinks dramatically to about the size of a city (crushed by gravity until neutron degeneracy stops it from contracting into a black hole). And without any more energy coming from the core, the outer parts of the star begin falling in towards the core VERY FAST. When these outer layers come crashing in on the neutron star at the center, they effectively bounce off of it and sail outwards into the universe. This is a Type II Supernova, the ejection of material into the universe because of a VERY hard bounce.

Is it possible for a star to explode without there being any remnant left over? Am I bluffing you because I haven't mentioned how it could potentially happen? Would I write all of this if there wasn't something more? Or am I double bluffing you and trying to make you believe that there should be more when there isn't? Or even worse is it a triple bluff?? In the comments box give your answer; "Yes" if you think a star can blow itself to oblivion, "No" if you think there should always be a remnant. If you want you can even give a reason for your answer Now don't cheat! Make sure you make your decision and comment before looking at the link below with the answer. If you get the answer right, why not go and share this post to show off to your friends. We will post the answer with the explanation in 24 hours.