Experts Say That Those Giant Spiders Falling From the Sky Are Good, Actually

"They are docile, non-threatening, and actually very polite" 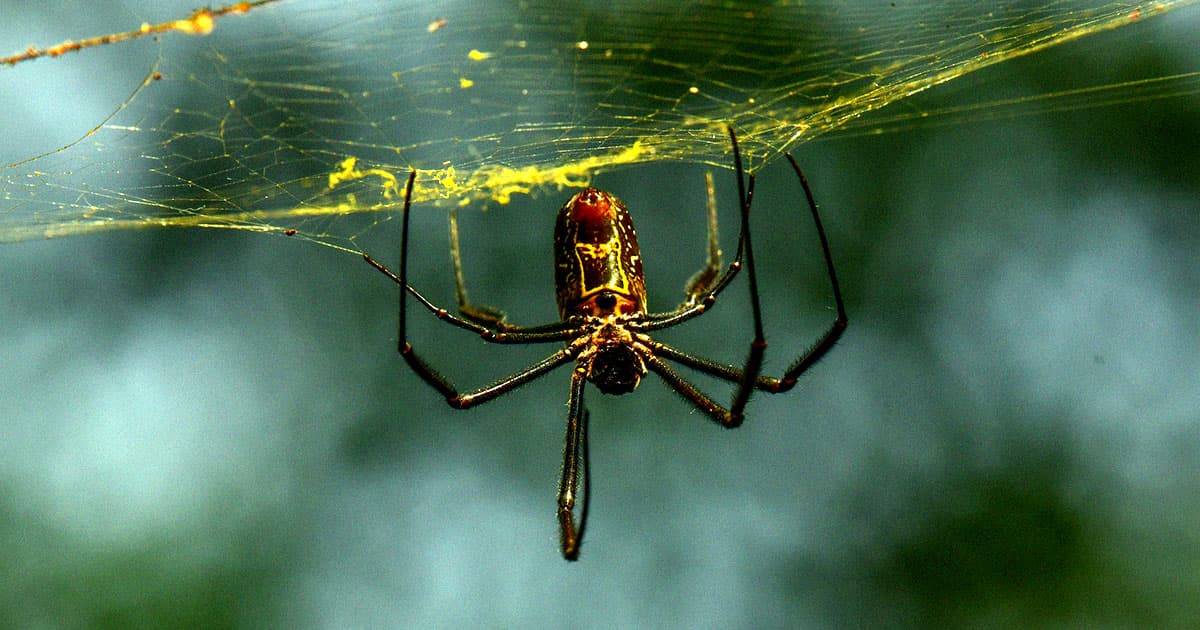 Arachnophiles, rejoice — there's soon to be a new spider in town, and according to experts and critics alike, it's not nearly as terrifying as some media have made it out to be.

After news broke that the giant blue, black and yellow arachnids known as the Joro spider are soon to parachute their way onto the East Coast, people understandably freaked out.

But according to science communicator and aspiring arachnologist Tea Francis, everyone needs to "calm down."

Golden orb weavers like the Joro spider do originate in East Asia, Francis wrote in a Twitter thread, but have already been in the United States for decades, and the Joro specifically has been in Georgia and North Carolina since around 2013. Additionally, the Americas also have their own indigenous orb weavers called Trichonephila clavipes, Francis noted, which are more commonly known as golden silk orb weavers and now live everywhere from the Southeastern US to Argentina.

Not only is this type of spider common in North America, Francis wrote, but they're also quite harmless and, significantly, won't be full-grown when they float down to Earth from the skies. But because of the parachuting these spiders do as hatchlings — which is not an uncommon mechanism, and was even seen in the popular children's book "Charlotte's Web" — media have glommed onto this story as if it was a real-life version of the 1990 cult classic "Arachnophobia."

"Having worked with several [of this type of] species personally, I can tell you first hand that they are docile, non-threatening, and actually very polite," the science communicator wrote. "The worst that’s likely to happen to you is you walk into a web you didn’t see in time and really, whose fault is that?"

"Yes, their range is expanding, but there are already very similar spiders present in these areas anyway," Francis wrote, adding that "the big ones don’t float about and land on people at random" and, most importantly, even though they do have some venom in their small fangs (which, the science communicator noted, most spiders have), "they're not dangerous."

Francis isn't the only expert working to dispel fearmongering about these relatively normal spiders. In an interview with UGA Today, Andy Davis, one of the researchers behind the study that introduced everyone to the spiders, said that the critter — which, remember, has been in Georgia for nearly a decade now — doesn't seem to harm the ecosystems of the areas it invades, and can actually provide an important food source for birds and other predators.

"People should try to learn to live with them," he told the site. "If they’re literally in your way, I can see taking a web down and moving them to the side, but they’re just going to be back next year.”

Meanwhile, on Twitter, journalists and spider enthusiasts alike are pushing back on the sky-is-falling tone of the Joro reporting — and, in some cases, poking fun at the spider-loving backlash as well. Here are some of our favs:

i wish it wasn’t socially acceptable to print baseless scary stories about arthropods but in the grand scheme of journalistic malpractice, it’s low on the list. better than copaganda and war mongering i guess. anyway here’s some good info on joro spidershttps://t.co/OjFs8xmVk8

Joro spiders are not "invading" or "infiltrating." These morally charged words are inappropriate. They are simply here now. They are harmless and there is no evidence they are a threat to any native species. Also, they are beautiful. Chill out, people. pic.twitter.com/jWoKH1zPL9

aight I don't have the energy to engage with all the Joro spider fearmongering so for reference:
-spiders this big ALREADY live on the east coast, eg Argiope
-99% of spiders' venom (Joro included) is medically insignificant
-the only ones at risk are native spiders MAYBE

And Some Japanese Mythology to Boot

You might see a big Japanese Joro spider in the US this year. Named after a feminine Yokai, a spirit, Jorogumo. A spider who shape-shifts into a beautiful woman. Don't worry, these huge gorgeous spiders are harmless. They aren't able to bite you, but they do eat stink bugs! pic.twitter.com/FDrJ1oBIKp

As NPR notes, the Joro spider gets its name from the Japanese legend of Jorōgumo, which recounts the tale of a beautiful woman who turns into a spider.

Bottom line: the Joro spiders are very low on the risk of existential threats facing people on the East Coast of the United States. And in fact, their defenders say, they're actually kind of based.

READ MORE: No, you don't need to worry about joro spiders. They may even be helpful in some ways [NPR]

Read This Next
Death From Above
Autonomous Drones Are Dropping Rat Poison Bombs on This Island
Futurism
Asian Ticks on New Jersey Sheep? Invasive Species Are a Reality of Our Future
Futurism
California Has Set Up A Hotline Due to Invasive, 20-Pound Rodents
More on Earth & Energy
RIP Fred
4:57 PM on the byte
Instead of Predicting Length of Winter, Groundhog Simply Dies
Fly Guy
Yesterday on the byte
Bird Advocates Horrified by Pigeon Dyed Pink For Gender Reveal Party
The Dos and Do-Do...
Yesterday on the byte
Startup Backed By "Jurassic World" Producer Says It Will Revive Extinct Dodo Using Complete Genome
READ MORE STORIES ABOUT / Earth & Energy
Keep up.
Subscribe to our daily newsletter to keep in touch with the subjects shaping our future.
+Social+Newsletter
TopicsAbout UsContact Us
Copyright ©, Camden Media Inc All Rights Reserved. See our User Agreement, Privacy Policy and Data Use Policy. The material on this site may not be reproduced, distributed, transmitted, cached or otherwise used, except with prior written permission of Futurism. Articles may contain affiliate links which enable us to share in the revenue of any purchases made.
Fonts by Typekit and Monotype.